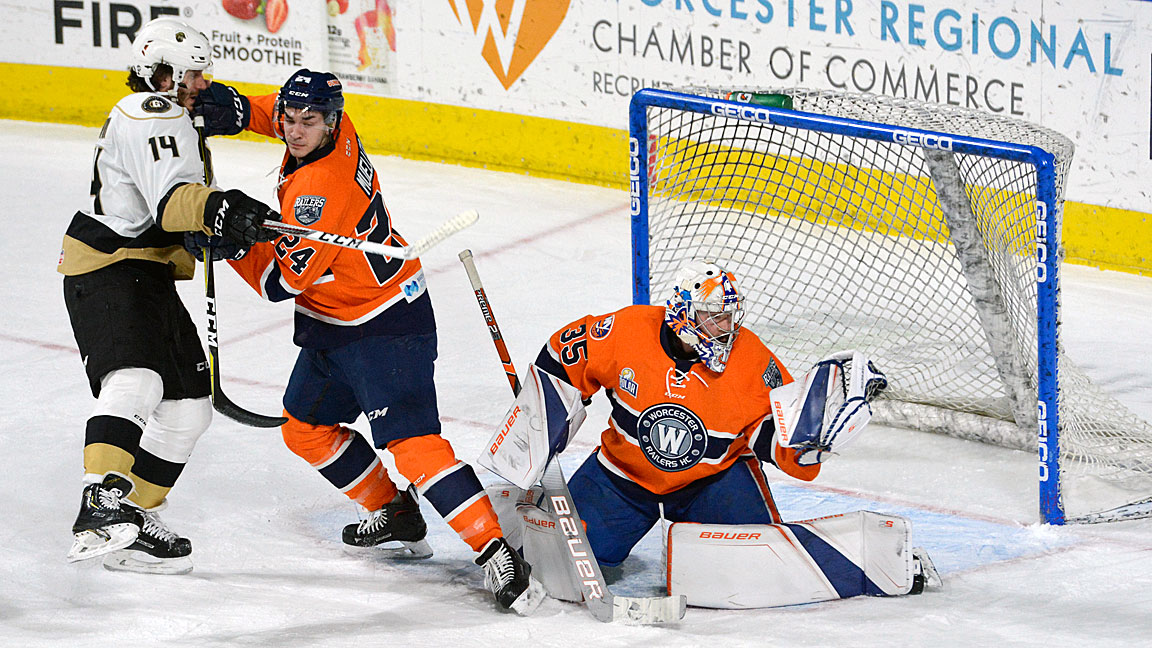 Meeting 4 of 8 vs. Newfoundland this season

WORCESTER, MA – The Worcester Railers HC (17-16-3-2, 39pts) won their season high fourth straight game with a come from behind 3-2 overtime victory over the visiting first place Newfoundland Growlers (26-11-2-0, 54pts) in front of 3,135 fans at the DCU Center on Friday evening. The Railers four game homestand concludes on SCOUT NIGHT on a BIG GAME SATURDAY at 7pm vs. the Newfoundland Growlers.

Ryan Hitchcock, Ryan MacKinnon, and Matt Schmalz scored for Worcester while Mitch Gillam made 31 saves in net for the Railers for his 11th win of the season.  Barry Almeida added two assists as Worcester improved to 3-0-0-0 on their four game homestand.  Former Railer Eamon McAdam made 17 saves in net for Newfoundland in the loss as the Railers tied the score late in the third period before winning the game in overtime.

Ryan Hitchcock (2nd) gave the Railers a 1-0 lead at 17:46 after he raced to the top of the crease and Tyler Barnes zipped the puck in front from the right corner that Hitchcock jammed through Eamon McAdam.  Newfoundland tied the score just 19 seconds later after the Growlers won the puck behind the Railers net and Marcus Power (15th) was found alone in front of the Railers net at flipped a backhander past the glove of Mitch Gillam.  Shots were 11-5 in favor of the Growlers through 20 minutes of play.

Neither team scored in the second period as shots were 7-7 in the middle frame as the two clubs headed into the second intermission tied 1-1 through 40 minutes of play.

The Growlers grabbed their first lead of the game after Mitch Gillam was bowled over and Griffen Molino (3rd) scored on a penalty shot at 14:05 of the third period with a nice move.  With the extra attacker on the ice, Ryan MacKinnon (3rd) sent the tying goal into the net with a rebound strike at 19:22 to force overtime.

In overtime, Mitch Gillam made two great saves before sending a long pass ahead that sent Matt Schmalz (8th) into the offensive zone and Schmalz crashed the net for the overtime game winner at 3:54 to give the Railers a 3-2 overtime victory.

Notes: Three Stars: 3rd star: Griffen Molino (Goal) 2nd star: Matt Schmalz (OTG) 1st star: Ryan MacKinnon (Tying Goal) …. final shots were 33-20 in favor of Newfoundland…. Eamon McAdam (1-1-1) made 17 saves on 20 shots for Newfoundland…. Mitch Gillam (11-9-1) made 31 saves on 33 shots for Worcester…. while Evan Buitenhuis served as the backup…. Worcester went 0-for-3 on the power play while Newfoundland went 0-for-3…. Kyle McKenzie (inj), Yanick Turcotte (susp), Nick Roberto, Tommy Panico (inj), and Malcolm Gould (inj) did not dress for Worcester…. Jeff Kubiak, Matty Gaudreau, Josh Holmstrom, and Mike Cornell are currently on recall with the Bridgeport Sound Tigers…before the game the Railers signed defenseman Kevin Hart….Matt Schmalz (4-3-7) now has a four-game point streak… Barry Almeida added two assists and was +2…. Worcester is now 3-0-0-0 on their four game homestand and 11-6-3-1 on home ice this season….Mitch Gillam added an assist on the overtime goal…. The Railers are now 3-3 in overtime this season…Tyler Barnes, Tyler Mueller, and Tommy Kelley all added assists for Worcester….the win halted the Growlers six game win streak….the Railers moved over the .500 mark for the first time since they were 3-2-0-0 through five games.

What’s on Tap?…..Homestand Comes to an End

On Saturday, Jan 19 the Railers host the Newfoundland Growlers at 7pm on a BIG GAME SATURDAY on Scout Night!  Boy Scouts throughout central Massachusetts will be attending to receive a Railers HC hat and a Railers HC patch – call the Railers front office at 508-365-1750 for more information! Every Saturday night home game is SATURDAY NIGHT SIGNINGS presented by MidState Auto Group with a Railers player signing autographs during the first intermission.

HUDSON STAYS ON THE MOVE WITH RAILERS