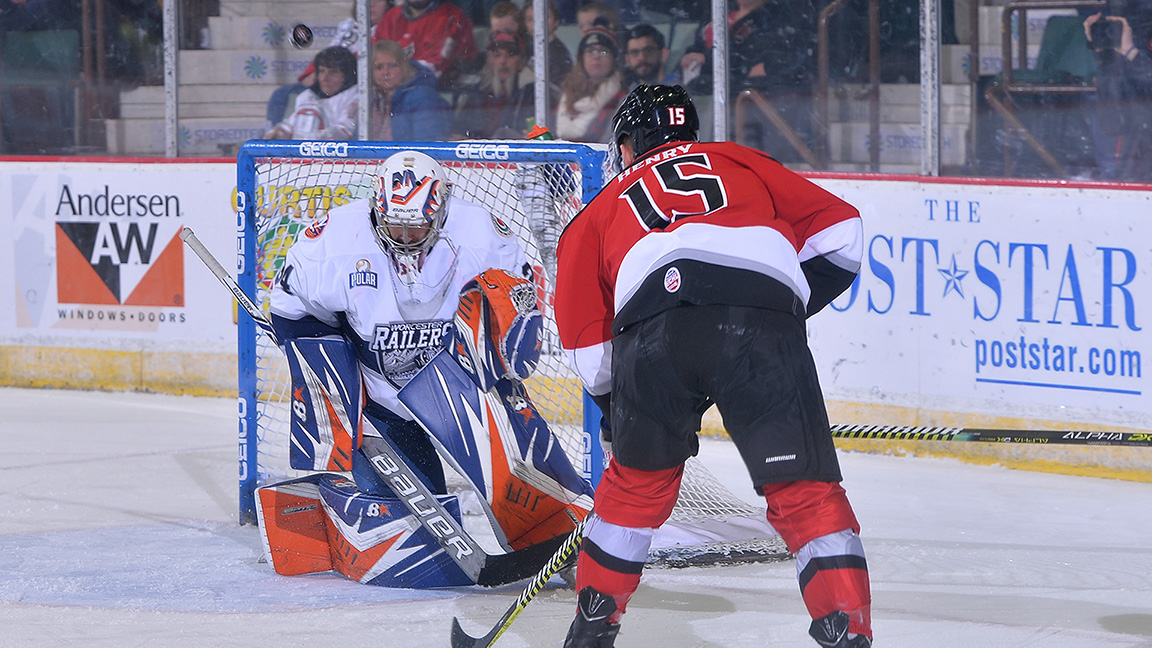 Meeting 5 of 14 vs. Adirondack this season

Glens Falls, NY– The Worcester Railers HC (4-5-0-0, 8pts) snapped their four game losing streak with a 5-4 shootout victory over the Adirondack Thunder (5-3-0-2, 12pts)on Friday evening in front of 4,213 at the Cool Insuring Arena. The same two teams will square off against one another on Sunday, November 10 at 3pm in Glens Falls.

Bo Brauer, Shane Walsh, Jordan Samuels-Thomas, and Ross Olsson all scored goals for Worcester while Evan Buitenhuis made 43 saves in net for his first win of the season in a game that featured 70 penalty minutes. Matt Schmalz and Barry Almeida each added two assists as the Railers snapped their four-game losing skid with the shootout victory. Evan Cormier allowed four goals on 23 shots in net for the Thunder while Casey Pierro-Zabotel scored twice, while Mike Szmatula and Kelly Summers each scored for Adirondack in their home shootout loss. Shane Walsh and JD Dudek each scored in the shootout whole Evan Buitenhuis made three stops on four shots.

Adirondack grabbed the first goal of the game just 1:44 in as Casey Pierro-Zabotel banged in a loose rebound past Evan Buitenhuis. The Railers would then score twice in a 35 second span as Bo Brauer (1st) tapped in a feed from Matt Schmalz at 10:35 and then Shane Walsh (1st) sent one by Evan Cormier in the high slot off of a feed from Bo Brauer at 10:10. Adirondack outshot Worcester 12-7 in the first stanza.

In a second period which featured 40 penalty minutes the Railers struck twice. Jordan Samuels-Thomas (3rd) with an excellent effort circling the cage slid one past Cormier to give Worcester a 3-1 lead at 3:50. Mike Szmatula (2nd) answered on the power play banging home a rebound behind Evan Buitenhuis with 4:22 left in the frame to decrease the deficit for Adirondack 3-2. Things would escalate after Ross Olsson (1st) tipped one past Cormier giving Worcester a 4-2 lead with 1:47 left in the middle stanza. Olsson (2ndFM) was then jumped by Gabriel Verpaeslt (2ndFM) and the two were assessed fighting majors. Worcester held a 4-2 lead after 40 minutes of play.

Adirondack was able to strike twice in the final period, first at 13:32 when Kelly Summers (2nd) blasted one home from the point at 13:32 making it a 4-3 game. Casey Pierro-Zabotel (4th) scored his second of the game at 17:32 tapping home a rebound tying it up at 4-4. Connor Doherty (2ndFM) dropped the mits with Robbie Payne (1stFM) with under five minutes to play in the third period. The game was deadlocked at 4-4 after regulation with the Thunder outshooting the Railers 41-21.

Each team had two power-plays in the overtime with back and forth action as Adirondack outshot Worcester 6-2 but neither team would score sending it into a shootout.

Shane Walsh and JD Dudek each scored goals for Worcester in the shootout while Evan Buitenhuis made three saves on four shots.

The Railers will have the day off on Saturday before meeting again on Sunday, Nov 10 at 3pm. The Railers return home on Wednesday, Nov 13 for the annual School Day Game with a 10am start time vs. the Reading Royals.

Railers up ended 6-2 vs. the Adirondack Thunder on Marvel Night
Scroll to top