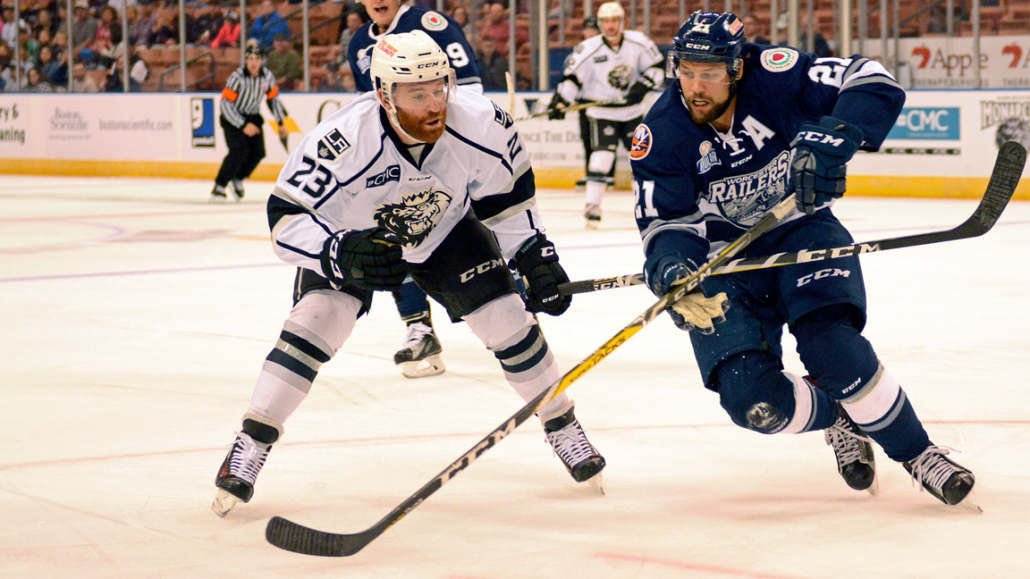 Meeting 10 of 15 vs. Manchester this season

Matt Lane and Barry Almeida scored for Worcester while Mitch Gillam made 30 saves in net for his 7th win of the season.  Kellen Jones and Mike Cornell added assists as the Railers won their first overtime game in franchise history on their 7th try.

Manchester scored the only goal in the opening frame as Spencer Watson (4th) was able to break down the right wing and cut across the crease before sliding the puck past an outstretched Mitch Gillam at 5:50. The Railers tied the score at 17:04 after Barry Almeida (10th) snapped a quick shot from the left circle past the glove of Charles Williams at 17:04.  Shots were 13-9 in favor of Worcester through 20 minutes of play with the score tied at 1-1.

Neither team found the back of the net in the second period as Manchester outshot Worcester 10-6 in the middle frame.  The two clubs headed into the second intermission with each scoring a goal on 19 shots on net.

Shots were 10-9 in the third period in favor of Manchester with both Mitch Gillam and Charles Williams making some big saves to force the game to overtime.

Both teams played a relatively conservative overtime period until Matt Lane (3rd) snapped a quick shot down the leftwing side on the rush for the game winner at 3:44 to give the Railers a 2-1 victory on the road.

Notes: Three Stars: 3rd star: Matt Schmalz (Goal) 2nd star: Spencer Watson (Goal) 1st star: Matt Lane (OT Goal) …Final shots were 31-31… Charles Williams (13-6-3) made 29 saves on 31 shots for Manchester…. Mitch Gillam (7-7-0) made 30 saves on 31 shots for Worcester… Eamon McAdam was the backup goalie …. Worcester went 0-for-4 on the power play while Manchester went 0-for-3… Matty Gaudreau (inj), Josh Monk (inj), Ashton Rome (inj), Brian Bowen, Connor Doherty, and Sean Gammage did not dress for Worcester…. Mike Cornell returned to the lineup after getting loaned back from the Bridgeport Sound Tigers earlier in the day and added an assist… Chris Langkow wore the captain C for the Railers as Ashton Rome was put on the reserve list before the game….Barry Almeida now has nine points (5-4-9) in his last 11 games.

The Railers six game road trip concludes in Manchester on Saturday at 6pm vs. the first place Monarchs.