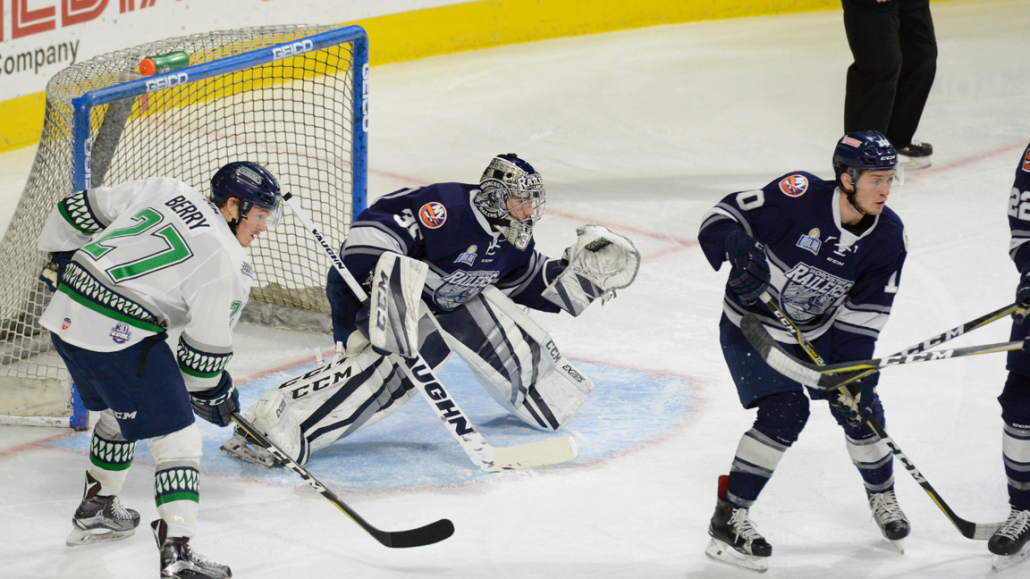 Meeting 1 of 1 vs. Florida this season

Worcester went 1-0-0-0 vs. the Everblades this season

Railers win come from behind thriller 3-2 in front of 4,754 fans at DCU Center

Railers 11 game homestand continues on a 2-3-4 Friday vs. the Adirondack Thunder

Vinny Muto (1-2-3) and Jeff Kubiak (1-1-2) scored in the third period for the Railers as Worcester came back from a 2-1 deficit to take home their third straight victory on home ice.  Frankie DiChiara also scored for Worcester while Mitch Gillam made 28 saves and added an assist as the Railers picked up six points this weekend.  Worcester is now 3-3-0-0 on their eleven game homestand and will host two more games next weekend.

Florida scored the only strike in the opening frame with a power play goal at 16:13 after an offensive faceoff win and a Matt McKenzie (4th) bomb from the center point through a screen and past Mitch Gillam.  Chris Langkow was robbed earlier in the period after his point-blank try was stopped by the glove of Callum Booth as the Railers headed into the first intermission down 1-0 as Florida led in shots 11-10.

Frankie DiChiara (5th) fired the puck from the left wall with traffic in front that found its way through goaltender Callum Booth at 8:59 assisted by Vinny Muto and Jeff Kubiak.  Florida would counter back with their 11th shorthanded goal at 15:43 after John McCarron (14th) followed up a rebound opportunity to give the Everblades a 2-1 lead.  Shots were tied 23-23 through 40 minutes of play.

Vinny Muto (1st) scored his first ECHL goal at 3:34 of the third period after a great feed by Chris Langkow to tie the score at 2-2.  Jeff Kubiak (5th) scored with a wicked shot on the rush down the left-wing side at 6:12 after a terrific feed from inside the Railers blueline by Vinny Muto.  Mitch Gillam would stand tall the rest of the way has he made seven third period saves to hold onto his 8th win in net and the Railers ninth win at the DCU Center this season.

Notes: Three Stars: 3rd star: Mitch Gillam (28 saves, Win) 2nd star: Jeff Kubiak (GWG, assist) 1st star: Vinny Muto (1-2-3) …Final shots were 31-30 in favor of Worcester… Callum Booth (13-5-3) made 28 saves on 31 shots for Florida…. Mitch Gillam (8-9-0) made 28 saves on 30 shots for Worcester…Eamon McAdam was the backup goalie…. Worcester went 0-for-2 on the power play while Florida went 1-for-2…Josh Monk (inj), Ashton Rome (inj), Brian Bowen, Tommy Kelley, Sean Gammage did not dress for Worcester… Kellen Jones and Mike Cornell is currently on recall with the Bridgeport Sound Tigers…TJ Syner returned to the lineup for the Railers…. Worcester improved to 9-10-1-0 on home ice…. Barry Almeida now has 12 points (4-8-12) in his last nine games…the Everblades have 17 wins on the road – the most in the ECHL….former Worcester Sharks defenseman Gus Young suited up for Florida….the Everblades lost for the first time in regulation when leading after 40 minutes (17-1-1) – it was just the 2nd win for Worcester when trailing after 40 minutes….Ben Masella and Vinny Muto each finished +3.

On Friday, Feb 2 the Railers host the Adirondack Thunder on a 2-3-4 Friday! Score $2 popcorn, $3 hotdogs, and $4 Bud Lights in the Bud Light Lounge every Friday game!

Railers pick up a BIG win on BIG GAME SATURDAY in front of 4,439 at DCU Cen...Railers host two promotion packed games at DCU Center this weekend!
Scroll to top