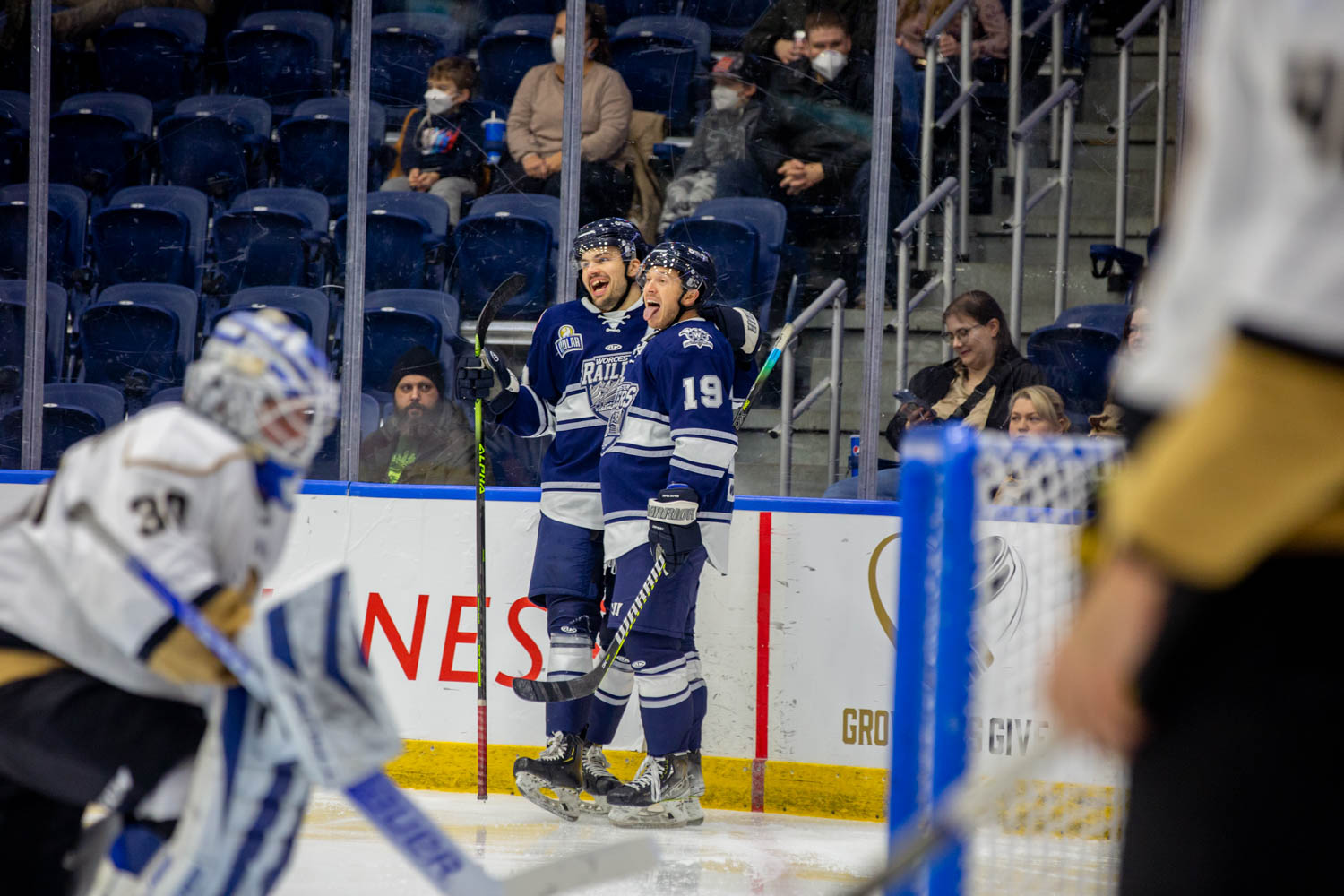 Meeting 3 of 12 vs Newfoundland this season

Railers are 3-0-0-0 against the Growlers

Nolan Walker scored the first goal of the game within the first 3 minutes of the contest after he found Pavel Gogolev, and himself on the two-on-one break. Walker’s pass to Gogolev was deflected back to himself out in front as he then finished and scored to make it 1-0 Newfoundland. Brent Beaudoin tied it up for the Railers, scoring on the power play twelve minutes into the game. Less than forty seconds later, Jared Brandt wound up and fired one past Dryden McKay, putting the Railers up 2-1. Thirty seconds later Reese Newkirk added another with his slapshot soaring past McKay, Railers 3-1. The first period onslaught wasn’t over for Worcester, as Bobby Butler tapped one in in front of the goal when teammate Brent Beaudoin passed him the puck to make it 4-1 Railers. Myles McGurty scored the first goal of the second period when Quinn Ryan sent him a pass in the slot and made it 5-1 Worcester. Phil Beaulieu scored his first goal in a Railer uniform two minutes later to make it 6-1. Dryden McKay’s night was done after Beaulieu’s goal, as Luke Cavallin then came into the game. Zach O’Brien took one coast to coast, his wrist shot beat Appleby high making it 6-2, Railers. O’Brien scored again two minutes later shortening the Railers’ lead to just 6-3. Brett Budgell scored for the Growlers off a one-timer to close out the second period with Worcester ahead 6-4. Despite the momentum the Growlers held heading into the third, Worcester held tight for the eventual win, taking the first two games on the weekend.

Newfoundland again came out hot on Saturday as they had on Friday. Nolan Walker found himself on a two-on-one break skating out wide looking to find teammate Pavel Gogolev for the one-timer. The pass was deflected by Conor McCarthy’s skate back to Walker, who then finished it past Appleby to put Newfoundland up 1-0 just 2:16 in. The Railers answered back on the powerplay courtesy of Brent Beaudoin. He fired off a one-timer in front of Growlers goalie, Dryden McKay, tying it up for the Railers. The game would not stay tied for long as Jared Brandt scored for the Railers forty seconds later, beating McKay blocker side. Reese Newkirk saw Brandt scoring forty second after Beaudoin and thought he could score faster. He wound up and fired one past McKay glove side to put the Railers up 3-1. The first period onslaught from Worcester was not yet over. The Railers found themselves back on the attack when Brent Beaudoin saw Bobby Butler open in front of the goal. Beaudoin passed the puck to Butler who tapped it in making it 4-1 Railers. That would end the Railers first period onslaught and the period. Railers were outshot 15-16 through the first period.

Early in the second Miles McGurty took a big shot against the board, McGurty got up after a short while and he was back on the ice for his next shift. This put the Railers on the powerplay for five minutes. A minute into the powerplay Railers defensemen Nolan Delmas committed a penalty making it a four on four. This didn’t stop the Railers from scoring, Quinn Ryan found Myles McGurty in the slot for an easy one-timer. This was McGurty’s first goal in almost a full calendar year. Railers 5-1. Railers scored on the power play again a few minutes later. Phil Beaulieu scored his first goal in a Railers uniform when he loaded up his cannon and fired one past McKay. Railers 6-1. That was the end of McKay’s night, Luke Cavallin set into the goal for the Growlers. Zach O’Brien got the Growlers back on the scoreboard halfway through the second period with back-to-back goals. The first goal started off with a stellar save from Cavallin. O’Brien took the puck coast to coast and beat Appleby high with a wrist shot. The second of his goals came after the Growlers stole the puck in the neutral zone, O’Brien found himself in the slot, and scored off a pass from Derian Plouffe. The Growlers scored the final goal of the period with a minute and thirty seconds left to play. Pavel Gogolev and Brett Budgell found themselves on a two-on-one breakaway. Gogolev skated out wide with the puck and passed it over to Budgell who scored on the one-timer. Worcester led 6-4 to end the second period. Worcester was outshot 22-27 through two periods.

Jared Brandt committed a penalty fifty seconds into the third period, putting the Growlers on the power play. The Railers successfully killed that powerplay thanks to some great saves by Appleby. Newfoundland pulled Cavallin to get an extra skater with two minutes left. The Growlers didn’t score, but that was not due to a lack of opportunities. Ken Appleby made 13 saves in the third period to help Worcester lock up the win, 6-4. The Growlers outshot the Railers 40-27.