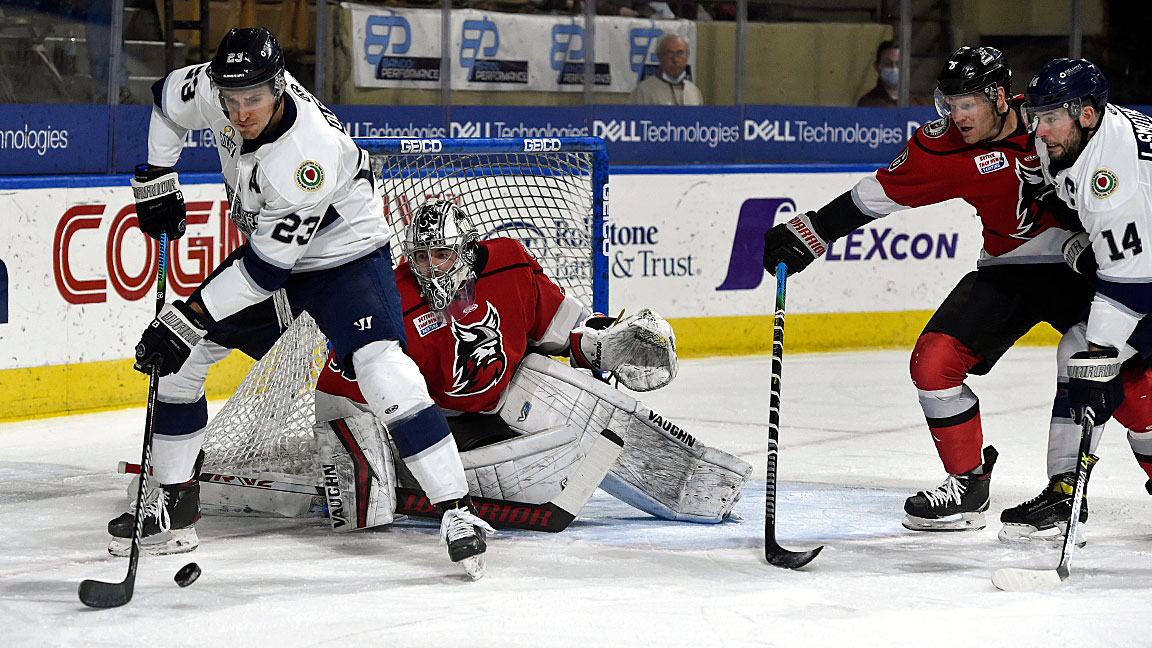 The Railers beat the Adirondack Thunder Saturday night, 3-2, and play the Glens Falls guys again Sunday with a chance to win two in a row for the first time this season.

The triumph was officially of the come from behind variety since Worcester fell behind, 1-0, early in the second period. The Railers followed up with goals by Ross Olsson, Anthony Repaci and Cole Coskey to give goalie Ken Appleby a little leg room.

Both Adirondack goals were on the power play. Joe Masonius had the first, Robbie Payne the last.

“We had to catch up to that game a little bit,” coach Dave Cuniff said. “I just don’t think we were playing fast enough.”

The Railers survived that slow start and began to put things together with Olsson’s goal at 13:14 of the second period.

It wasn’t pretty — not many of Olsson’s goals are — but it was a significant one for both the Railers and him. The puck appeared to go in off Olsson’s body after Jordan Lavallee-Smotherman sent a pass across the top of the crease. The Thunder argued “no goal” but Olsson was being taken down by Adirondack defenseman Jimmy Mazza at the time and Mazza was going to be penalized.

Referee John Lindner had it as a good goal all the way.

“No, he’s not pretty, but he’s effective,” Cunniff said of his wingman. “Some other guys should take a look at what he’s doing.”

It was Olsson’s 10th of the season and the 24th of his Railers’ career. That ties him for third on the team’s all-time list in that department. Barry Almeida has 60 and Tylers Barnes 28. Olsson, Nic Pierog, Woody Hudson and Matty Gaudreau also have 24.

Ken Appleby had another strong game in net to help keep the Railers in it early and wound up with 32 saves. Brandon Kasel made one few on the same number of shots for the Thunder.

The Railers allowed the game’s first goal for the third time in a row. This time it came early in the second period via a power play goal by Masonius. The Thunder delivered three straight good shots that Appleby stopped. Masonius got a fourth rebound, though, in the right circle and snapped one home from there at 2:18.

Worcester had not lead in a game for 148 minutes until Repaci made it 2-1 at 8:02 of the second period. Brent Beaudoin forced a turnover behind the Thunder net and Repaci gained control, then popped one past Kasel that just made it over the goal line.

Coskey, set up by Bobby Butler, zipped home a 30-foot wrist shot 33 seconds later and the Railers held on for the victory, although the final seconds were frantic.

In limited ice time once again, Butler made a difference. He had the assist and is 1-5-6 in three games. He was plus-2 and is plus-5 in those games.

MAKING TRACKS_ Five of Olsson’s 10 goals have been scored against Adirondack. … With Colten Ellis back for the moment, and backing up Appleby Saturday night, the Railers have three goaltenders including Luke Peressini. Worcester has used seven goalies already this year, one short of the city’s pro record. The Sharks used eight in 2003-04. Only twice in Worcester history has a team gone with just two for the season. The IceCats did it in 1997-98 with Frederic Cassivi and Brent Johnson. The Sharks used Troy Grosenick and Harri Sateri in 2003-04. … Brennan Feasey, released by the Railers earlier in the week, was claimed by the Thunder and was in the starting lineup. He had an assist on the late goal. … The 3-in-3 homestand finishes Sunday at 3:05 with Adirondack the opposition again. … Attendance was 3,108. The Railers are just 6,853 people shy of drawing their 500,000th fan. … Lavallee-Smotherman remains hot. He has a five-game points streak and is 3-4-7 in those games. … Nobody on the Railers finished with a minus-rating. … Repaci has 47 shots on goal in his last 13 games and is 6-8-14 along the way.