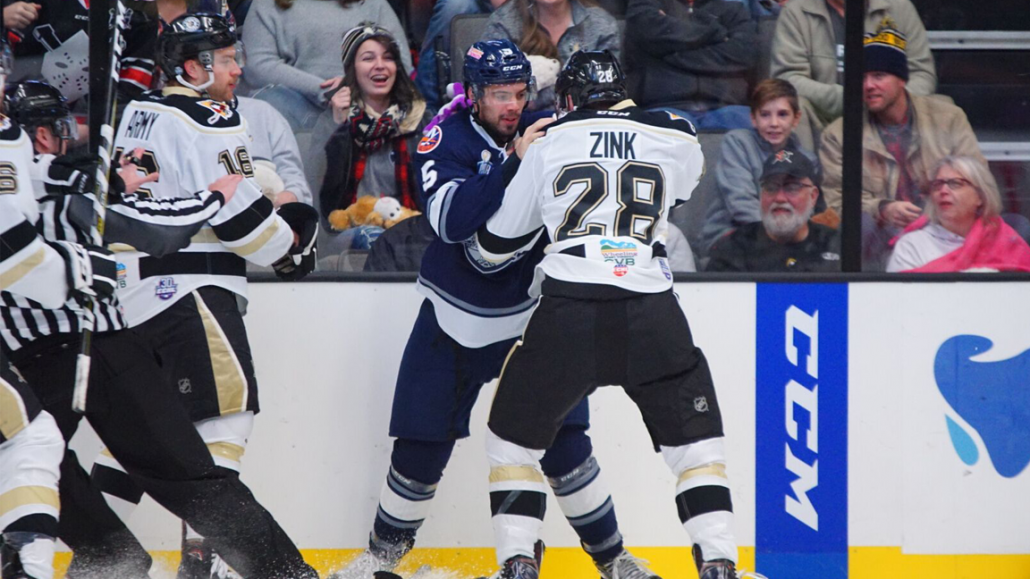 Meeting 2 of 9 vs. Wheeling this season

A near postgame brawl ended a feisty game that saw six total fighting majors and 64 total penalty minutes.  Nick Saracino scored his first two goals of the year including the game winner midway through the third period.  Jeff Kubiak and Woody Hudson also scored for Worcester while Eamon McAdam made 34 saves in net for the win.  Mike Cornell added two assists as the Railers ended the week 1-1-0-1 on the road.

Yanick Turcotte (8th) got the crew fired up with a long fight off the opening faceoff with Jeremy Beirnes and Kyle McKenzie (1st FM) picked up his first fighting major vs. Dylan Zink at 5:17. The Nailers scored the only goal in the opening frame with a 5-on-3 power play one timer strike by Garrett Meurs (11th) at 13:52.  Wheeling had four power plays in the first and outshot Worcester 11-8 through 20 minutes.

Jeff Kubiak (2nd) tied the score at 44 seconds of the second period after Barry Almeida got the puck in front from the corner and Kubiak slid the puck through the pads of goaltender Adam Morrison.  The Railers went ahead at 10:45 after Nick Saracino (1st) broke free after a nice feed by Yanick Turcotte and Nick had a nice finish from in tight.  Eamon McAdam made some big saves in the frame but Wheeling found the back of the net late at 19:33 as Hunter Fejes (7th) snapped home a third chance.  Shots were 26-13 Wheeling after 40 minutes with the score tied 2-2.

Dan Milan (2nd) put the Nailers ahead 3-2 at 2:57 of the third period with a one timer blast from the left circle.   Woody Hudson (4th) deflected a Mike Cornell shot into the net at 9:53 to tie the score at 3-3. Just over two minutes later, Nick Saracino (2nd) ripped a shot five home from 30 feet at 11:57 for the game winner. Both benches emptied after the game with Ashton Rome and Dan Milan getting majors and game misconducts as several skirmished broke out but did not fully develop.

On Friday, the Railers head to Adirondack, NY to close out a four-game road trip vs. the Thunder at 7:05pm.

On Saturday, Dec 2, the Railers return home to the DCU Center for a BIG GAME SATURDAY vs. the Manchester Monarchs at 7:05pm.  The first 3,000 fans will receive a TRAX bobble courtesy of the Worcester Telegram and Gazette.  Tickets are as low as $15!