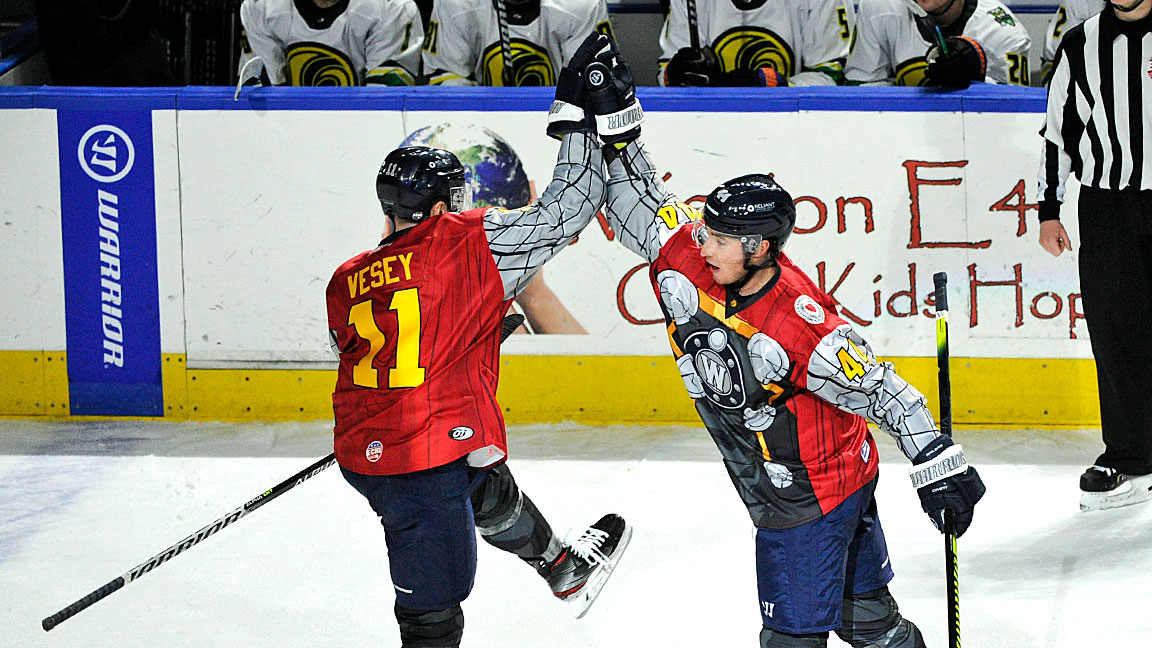 They were outshot by the Reading Royals, 36-23, but beat the visitors by a 2-1 score in which every goal was unassisted. Brent Beaudoin and Will Cullen had the ones for Worcester. Jacob Pritchard scored for Reading.

The difference was goaltending, as it usually is when the Railers win. Ken Appleby was sensational, making 35 saves as the Royals owned the ice for most of the final two periods.

“He makes it look so easy,” coach David Cunniff said. “It looks like he’s making these great saves without even blinking. I hope the people watching him play understand how good he really is.”

Beaudoin has blossomed over the last few games, becoming Worcester’s most productive forward. He put the Railers ahead, 1-0, with a 35-foot wrist shot at 17:16 of the first period and is 4-3-7 in the last six games.

Cullen is a newcomer and has added a lot of energy to the defensive corps. He has three goals in the last seven games.

“He’s got a ton of a skill; he’s a good skater,” Cunniff said. “When you watch a game he really jumps out at you. There are things he’s getting away with now that he won’t get away with at a higher level, but we’re working with him and he’s working on it.

“But you can’t put a leash on him because he’s so effective.”

Cullen scored from between the circles at 19:01 of the first period and Appleby made that lead stand up. Pritchard’s goal came at 13:54 of the second.

Some ECHL teams began their All-Star breaks after Saturday’s games but not the Railers and Royals. The All-Star Game is in Jacksonville on Monday but there are three regularly scheduled games that day as well.

One is Worcester at Reading and the Railers will be without Appleby, their All-Star representative. He and COO Mike Myers are flying to Florida Sunday.

Myers said that the team gave Appleby the option of going to Florida or staying back in Worcester and after weighing the pros and cons, Appleby decided to play in the All-Star Game, something he has never done as a pro.

“We didn’t figure our goalie would be an All-Star,” Myers said, “and we also figured we’d have Ken and Colten Ellis as our two goalies so it would not have been a problem.”

Ellis is in the AHL, though, which means rookie Luke Peressini will play in Reading.

“Is it a competitive disadvantage for us,” Myers said, “or is it an opportunity for Luke to get in a game and show what he can do? He was going to get a start soon, anyway.”

With that start, he will have a chance to help the Railers win back to back games for the first time this season.

MAKING TRACKS_ Cole Coskey was under the weather but not a virus victim. Liam Coughlin is on the Commissioner’s Exempt List, so out of action. … Rookie defenseman Austin Osmanski was recalled by Springfield. … Forward Grant Jozefek is the only Railer out with an injury. He has not played since Dec. 8. …  The next game at the DCU Center is scheduled for Jan. 21 versus Trois-Rivieres. … Ross Olsson’s roughing minor in the first period gave him 201 PIM for his Railers career and he added two more minutes later. Yanick Turcotte (527) and Mike Cornell (348) are the only other Railers above 200. …It was Marvel Super Hero Night sponsored by the Telegram & Gazette. T-G sports editor Jim Wilson dropped a ceremonial first puck and appears to have a career opportunity as a linesman. … Attendance was 4,822, the best crowd since before Christmas. … A sign of the times — Karl Boudrias is the Railers’ reigning iron man. Saturday night was his 20th straight game. … Myles McGurty made the season’s best rush by a defenseman in the first period but just missed scoring his first goal of the season. … Nick Albano took a shot off his left foot in the second period and missed most of the rest of the game. He had it in an ace bandage as he walked out of the dressing room. … The victory snapped Reading goalie Karill Ustimenko’s winning streak versus Worcester at six games.

Royals Roar Too Loud as the Railers Lose 6-3