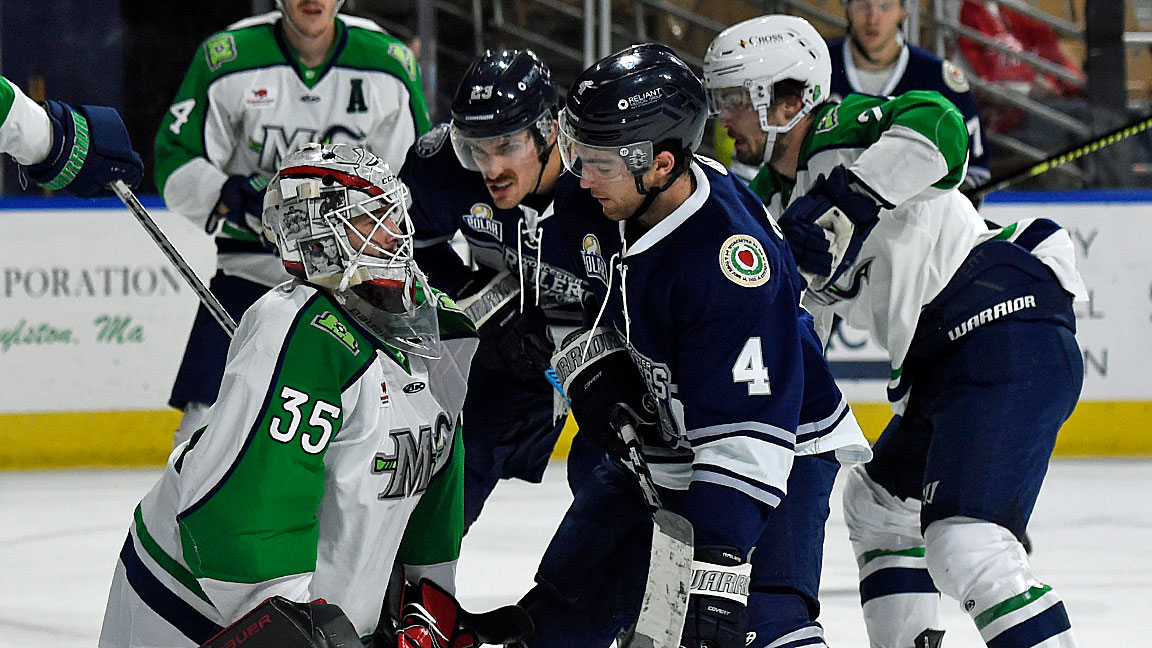 Worcester Railers HC vs. Maine Mariners
December 1, 2021
DCU Center
Meeting 4 of 14 vs. Maine this season
Railers are 2-2-0-0 vs. the Mariners this season
Railers Take Down Mariners in the Shootout 3-2
Zach Malatesta scores first goal as a Railer
Worcester, MA – The Worcester Railers HC (6-8-0-1, 13pts) won the fourth meeting in the “VIP Rivalry Cup”, beating the Maine Mariners (6-6-2-1, 15pts) by the final score of 3-2 at the DCU Center on Wednesday night. The Railers are back at the DCU Center against the Adirondack Thunder on Friday, December 3rd at 7:05pm.
Liam Coughlin (1-0-1) and Zach Malatesta (1-0-1) found the back of the net for the Railers while Colten Ellis made 38 saves in net for Worcester in the victory. Kelti Jeri-Leon (1-0-1) and Andrew Romano (1-0-1) added goals for Maine while Jeremy Brodeur made 33 saves for Maine in the loss. The shootout went six rounds as Liam Coughlin would provide the eventual game winner with Colten Ellis stopping Cam Askew in round six.
For the third time in four matchups between Worcester and Maine, The Mariners scored the game’s first goal. It came off of transition passing between Andrew Peski, Justin Brazeau and Keltie Jeri-Leon (2nd), as Jeri-Leon was able to guide a shot past Colten Ellis to give the Mariners a 1-0 lead. Five minutes later, just after a penalty to former Railer Connor Doherty, a slapshot from Zach Malatesta (1st) was able to find the back of the net after bouncing off of a Mariner in front, tying the game 1-1. The score would stay nodded up at one apiece after 20. Shots were in favor of Worcester 8-7.
9:45 into the second, Liam Coughlin (3rd) carried the puck through neutral ice, found some room on the left side, then fired a wrist shot that went top shelf on Mariners goalie Jeremy Brodeur, giving Worcester the 2-1 lead. The Railers went on a 4-3 powerplay with 6:50 to go in the period, but were unable to capitalize on the opportunity to extend their lead. The score would remain 2-1 heading into the third period. Shots in the second favored Worcester 15-9.
In the third, Colten Ellis was able to make back-to-back pad saves on the doorstep to initially deny Maine, but Andrew Romano (2nd) picked up the rebound and put it past Colten the third time around and tied the game 2-2. Ellis was excellent in the third period, making 21 saves on 22 shots for the Mariners. Sixty minutes wouldn’t be enough, as the two teams would head into overtime with the game tied at two apiece.
Worcester came out firing in the seven-minute three-on-three overtime period, outshooting Maine 7-2. Neither team found the back of the net during extra time, as the game would be settled in a shootout.
In the first round, Jacob Hayhurst beat Brodeur high blocker while Colten Ellis made a save on Justin Brazeau to put Worcester ahead 1-0. In the second round, Jordan Lavallee-Smotherman’s backhand shot was denied by the right pad of Brodeur, while Connor Bleackley was able to score just off of the glove of Ellis and tied the shootout 1-1. Neither goalies were able to make a stop for the next three rounds, as Matthew Santos, Jason Horvath, and Patrick Shea for Maine, and Anthony Repaci, Grant Jozefek, and Nolan Vesey for Worcester each found the back of the net. In the seventh round, Liam Coughlin was able to nudge one by Brodeur on the backhand, while Ellis forced the shot of Cameron Askew wide right. Worcester won the shootout 5-4, and the game 3-2.
Notes: Three Stars: 3rd Star: Jacob Hayhurst (0-0-0, shootout goal, 4 shots) 2nd Star: Colten Ellis (38 saves, 2 GA, .950 SV%) 1st Star: Liam Coughlin (1-0-1, shootout winner, 3 shots)… Final shots were 40-36 in favor of Maine… Jeremy Brodeur (5-3-2) made 33 saves on 35 shots for Maine… Colton Ellis (3-2-0) made 38 saves on 40 shots for Worcester… Worcester went 0-for-4 on the power play while Adirondack went 0-for-2… Mike Cornell, Connor McCarthy, Felix Bibeau, Paul Thompson, and Collin Adams are each up with the Bridgeport Islanders… Nick Albano is up with the Springfield Thunderbirds… Zach Malatesta scored his first goal of the season, and his first goal as a Railer… This was the Railers second shootout game, and first shootout win this season… Ross Olsson now has points in four of his last five games, and seven points over that same span… Jordan Lavallee-Smotherman led the Railers in shots with 6… Worcester has 57 games left on the regular season 29 of which are at the DCU center. The Railers are now 10-12-4-3 all-time vs. the Mariners and 8-3-2-1 at the DCU center against Maine.
https://railershc.com/wp-content/uploads/2021/12/RL46232-RICH-LEBLANC.jpg 648 1152 admin /_media/2021-22/logo.png admin2021-12-01 22:46:202021-12-01 22:46:21Railers Take Down Mariners in the Shootout 3-2