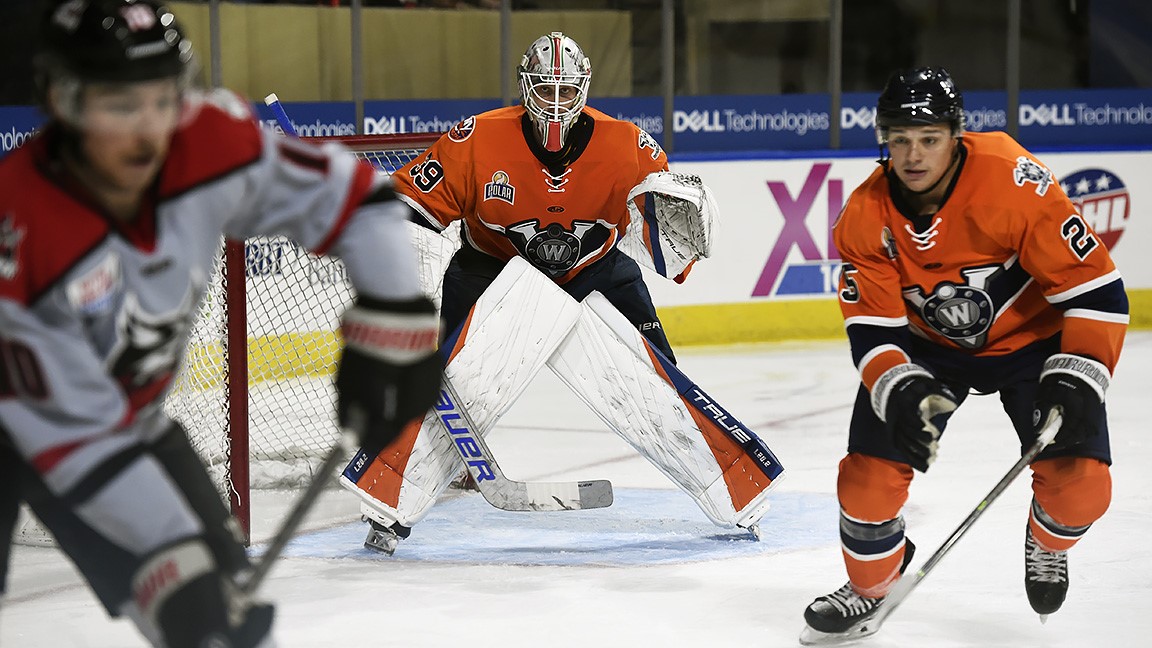 They don’t have to score five goals to win. On occasion, four will do.

Worcester made it a 2-0 start to the season with a 4-1 triumph over the Adirondack Thunder, once again prevailing in a game it never trailed. The Railers got a pair of goals from Steve Jandric and one apiece from Collin Adams and Brent Beaudoin.

They also got superb goaltending from Henrik Tikkanen, making his North American pro debut. Tikkanen stopped 26 of 27 shots and helped the Railers preserve an early 2-0 lead when their performance sagged a bit during the middle of the game.

“He was fantastic for us,” coach Jordan Lavallee-Smotherman said succinctly.

The only Thunder goal was a little iffy, at that. Noah Corson got it at 14:14 of the first period to cut the Railers lead to 2-1. From a distance, and later on unofficial video, it looked like Corson’s stick was high.

Smotherman asked about an official review but referee Michael Zyla told him it was not a reviewable play. So the goal stood.

Jandric, who showed promise in a late-season cameo last year after being signed out of Merrimack and thus played alongside Smotherman, had a dominant game and simply outskated the Thunder twice to score.

“I liked him last year,” Smotherman said of Jandric. “He was strong, he was solid, he could put the puck in the net. We knew that. He’s at a whole different level this season. From the day he arrived in camp he’s been phenomenal.

“He’s stronger and he’s faster. His compete level is through the roof. He’s been one of our better forwards since Day 1 of camp and honestly, I couldn’t  be happier with the attitude and with the effort.”

Jenkins set up Adams’ goal at 4:48 of the first period after Reece Newkirk won a battle near the blue line to keep the puck in the offensive zone. It wound up going to Jenkins, who fired a bad angle shot at Thunder goaltender Isaac Poulter.

The rebound did a right-angle out to Adams alone in front and Poulter had no chance to make that stop.

Jandric scored a pretty goal at 13:10 to give Worcester a 2-0 lead. He got the puck from Blake Christensen and went into high gear down the right wing, turning the Adirondack defense and beating Coulter as he cut across the front of the net.

The Railers came back to life in the third period, scoring twice and creating several great chances. Jandric’s second goal, set up by Jacob Hayhurst, came at 10:05 as he skated through a group of Thunder defenders and broke in alone on Poulter. Then, with Poulter on the bench, Beaudoin had six feet of empty net to shoot at from five feet away and finished the scoring at 19:24.

MAKING TRACKS – The Railers had one lineup change with Quinn Ryan making his Worcester debut, Bobby Butler getting the day off. … Tikkanen is tied with goalie Ian Milosz and defenseman Connor McCarthy as tallest Railers ever at 6-feet-7. … The Railers are out of town until they play host to Newfoundland on Nov. 2. In the meantime they have a three-game road trip and play at Trois-Rivieres Wednesday, then play back to back in Adirondack next Saturday and Sunday. … The Thunder was without Yanick Turcotte, who got a game misconduct for leaving the bench for an altercation at the end of Saturday night’s game. It is a five-gamer, so Turcotte will miss next weekend’s series as well. … Zyla made his DCU Center debut, becoming the first “Z” referee in franchise history. … It is just two games but the DCU boards, especially the backboards, seem livelier this season than in the past. … Worcester Red Sox president Charles Steinberg was a face in the crowd. … The Curse of the Rossbino? The Railers have not scored a power play goal since they traded Ross Olsson to Orlando last March. The streak is 16 games long — 14 last season and the first two this one. … Attendance was 4,107. … The Railers improved to 31-16-2 all-time versus the Thunder.