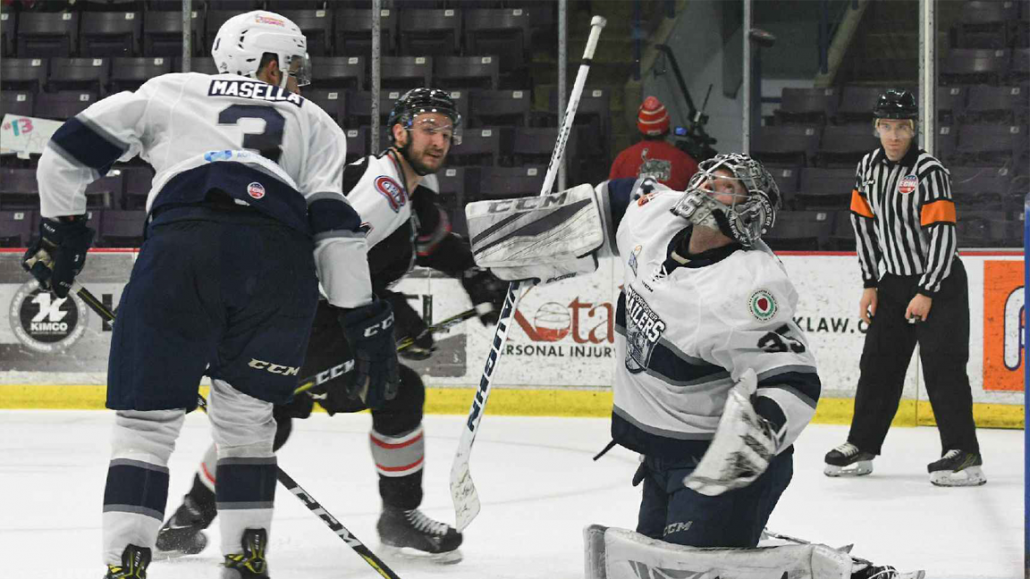 Meeting 5 of 7 vs. Brampton this season

Barry Almeida scored his team leading 17th goal of the season in the opening minute but that was all the offense Worcester would muster on goaltender Marcus Hogberg who made 30 saves.  Mitch Gillam made 27 saves in net as the Railers finished 3-3-0-1 on their season long seven game road trip.

Barry Almeida (17th) scored just 24 seconds into the first period as Ben Masella ripped the puck into the corner from center and the puck bounced in front to Aleida who when buried a quick shot past goaltender Marcus Hogberg.  The Beast would tie the score at 1-1 at 5:31 as Jamie Doornbosh (3rd) snapped a shot from 50 feet through a screen and past Mitch Gillam.  Captain Chris Langkow (2nd FM) pounded Scott Jacklin with a fury of fists at 14:49 as the Railers outshot the Beast 17-7 in the first 20 minutes of play.

Jeff King (4th) gave the Beast a 2-1 advantage with a wrist shot on the rush down the right-wing side that snuck through the pads of Gillam at 7:55 of the second period.  The Railers had an extended 5-on-3 power play midway through the frame the Beast and their 5th ranked penalty kill stood strong.  Shots were 24-19 in favor of Worcester through 40 minutes of play but the Railers trailed 2-1.

Notes: Three Stars: 3rd star: Chris Leveille (1-2-3) 2nd star: Vincent Dunn (0-3-3) 1st star: Marcus Hogberg (30 saves, Win) …Final shots were 31-31… Marcus Hogberg (6-5-1) made 30 saves on 31 shots for Brampton…Daniel Spence was the backup for the Beast…. Mitch Gillam (11-12-1) made 27 saves on 30 shots for Worcester in his 6th straight start… Joe Spagnoli was the emergency backup goalie as Eamon McAdam is still on recall with Bridgeport …. Worcester went 0-for-5 on the power play while Brampton went 0-for-2…Josh Monk (inj), Ashton Rome (inj), Brian Bowen, and Vinny Muto did not dress for Worcester….Kellen Jones, Matty Gaudreau, Mike Cornell and Eamon McAdam are currently on recall with the Bridgeport Sound Tigers…Ryan MacKinnon (Univ. of PEI) made his professional debut for the Railers on the blueline and wore #4….Worcester fell to 12-12-2-3 on the road this season and finished 0-2-0-0 at the Powerade Centre… Worcester finished the month of February with a 6-4-1-1 record…the Railers trail the Wheeling Nailers by seven points for the final playoff spot in the North Division – Worcester has two games in hand…. ….with the assist, Ben Masella now has eight points in his last eight games….Kyle McKenzie also had an assist for Worcester.

What’s on tap? – Railers return home for an action packed 3-in-3 weekend!

On Friday, March 2 the Railers finally return home and face the Wheeling Nailers at 7:05pm on a 2-3-4 Friday night!  Score $2 popcorn, $3 hotdogs, and $4 Bud Lights in the Bud Light Lounge.  It’s Marvel weekend as the Railers will wear a special Marvel themed jersey and Captain America will be in attendance!

On Saturday, March 3 the Railers host the Wheeling Nailers at 7:05pm on a BIG GAME SATURDAY!  The first 3,000 fans will receive a Captain America bobble presented by Cornerstone Bank!  It’s Marvel weekend as the Railers will wear a special Marvel themed jersey and Captain America will be in attendance!

On Sunday, March 5 the Railers host the Manchester Monarchs at 3:05pm on a KIDS GIVEAWAY SUNDAY! The first 1,000 kids 12-and-under will receive Railers HC thunder sticks.  Score a FAMILY FUN PACK at every Sunday game which includes four tickets, four hotdogs, and four sodas for just $80!