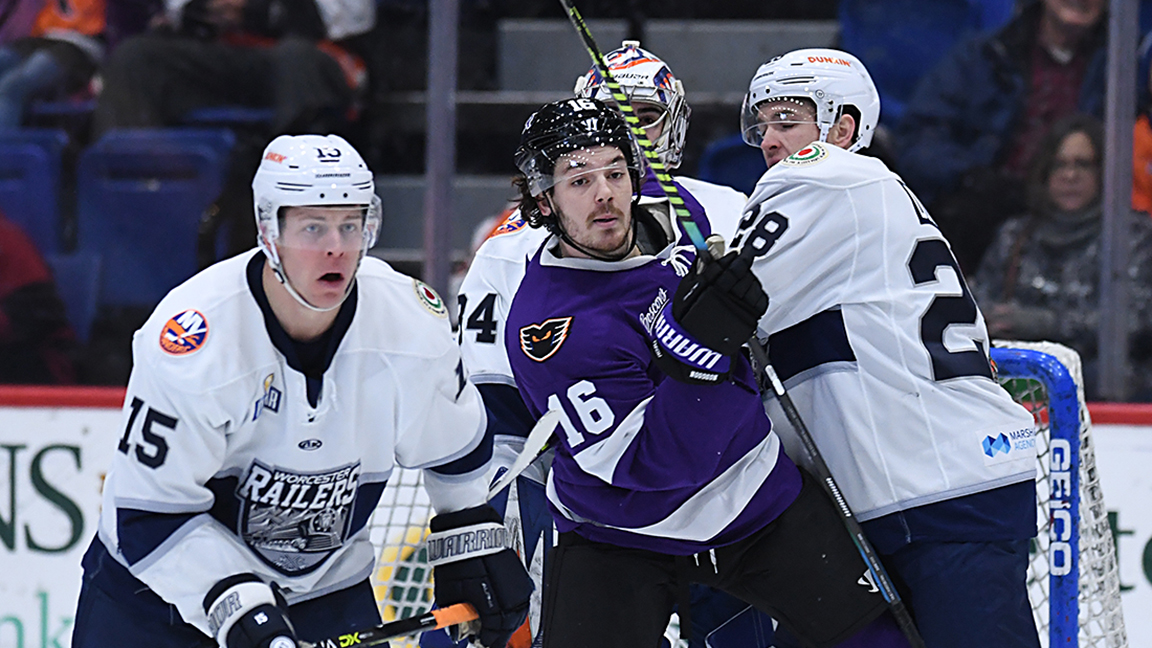 Meeting 7 of 13 vs. Reading this season

Reading, PA – The Worcester Railers HC(16-23-2-0, 34pts)headed into the ECHL All-Star break with a come from behind 3-2 overtime win over the host Reading Royals (22-13-5-0,49pts) in front of 3,253 fans at the SantanderArena on Monday afternoon.After enjoying a three-day ECHL All-Star break, the Railers return to action on Friday, January 24 with a 7:15pm start in Maine vs. the Mariners.

Shane Walsh, Drew Callin (1-1-2), and Jack Stander all scored for the Railers while netminder Evan Buitenhuis was excellent making 42 saves on 44 shots for his 10thwin of the season. Corey Mackin and Garrett Cockerill scored for the Royals while Kirill Ustimenko made 28 saves in net for the overtime loss. Barry Almeida added two assists for Worcester which included the primary helper on Stander’s overtime game winner at 4:55 of the extra frame.  The Railers are now 1-3-0-0 on their five-game road trip and improve to 2-2 in overtime this season.

Despite taking a pair of high sticking penalties, the Railers looked strong in the opening frame and grabbed a 1-0 lead at 10:06 as Shane Walsh (12th) finished off a nice 2-on-1 chance with Cody Payne.  Evan Buitenhuis was strong between the pipes with 16 saves as Worcester took a one goal lead into the first intermission.

Reading would score twice on 15 shots in the middle period to take a 2-1 lead through 40 minutes.  Corey Mackin (15th) tied the score at 1-1 after Garrett Mitchell sent a no look backhand pass from behind the net to Mackin who was stationed at the side of the net at 3:36.  Defenseman Garrett Cockerill (5th) gave the Royals a 2-1 advantage at 17:12 after a nice feed from Frankie DiChiara.  Shots were 31-19 in favor of the Royals through 40 minutes of play.

Drew Callin (9th) tied the score at 2-2 with a terrific shot on the power play at 11:55 of the third period assisted by Kyle Thomas and Ryan MacKinnon.  Neither team would find the net the rest of the frame with Reading outshooting Worcester 11-9 in the third period as the two clubs headed to overtime tied 2-2.

Jack Stander put the puck in the net twice in the overtime session, the first was ruled that it was kicked in, but the second on the backhand at 4:55 assisted by Almeida and Drew Callin gave the Railers the 3-2 road victory.

Notes: Three Stars: 3rd star: Evan Buitenhuis (42 saves, Win), 2nd star: Garrett Mitchell  (0-2-2) 1st star: Jack Stander (OTG) …. final shots were 44-31 in favor of Reading…Kirill Ustimenko (15-4-5) made 28 saves on 31 shots for Reading… Evan Buitenhuis (10-13-1) made 42 saves on 44 shots for Worcester while Ian Milosz served as the backup…. Worcester went 1-for-4 on the power play while Reading went 0-for-4….Worcester has been shorthanded an ECHL high 39 more times than their opponents this season….Dante Salituro, Jordan Samuels-Thomas, Kyle McKenzie, Ivan Chukarov (INJ), JD Dudek (IR), and Tanner Pond (IR) did not dress for Worcester….Eric Cairns, Chris Terreri, and Bob Deraney were behind the bench for the Railers as coach Cunniff served game two of his two game ECHL suspension….Bo Brauer skated on the blue line for Worcester…. Mike Cornell, David Quenneville, Linus Soderstrom, and Jakub Skarek are all with the Bridgeport Sound Tigers…. Drew Callin and Ben Thomson led Worcester skaters with four shots… Mackinnon, Payne, Almeida (2), Thomas, and Callin all recorded assists for the Railers…. the Railers are now 12-13-1-0 under GM/coach Cunniff….Worcester is now 8-12-2-0 on the road this season….The Railers are now 16-10-1-0 all-time vs. the Royals and 7-8-0-0 at the Santander Arena….the Railers enter the All-Star break eight points behind the Maine Mariners for the 4thand final playoff spot in the North Division with 31 games left.

The Worcester Railers return from the ECHL All-Star break with an action-packed weekend at the DCU Center!

On Friday, Jan 24 the Railers travel to Maine to battle the Mariners at 7:15pm.  Action begins live at 6:45pm on 98.9 NASH Icon with Eric Lindquist and Cam McGuire providing the call.

On Saturday, Jan 25 the Railers host Maine Mariner at 7pm on a BIG GAME SATURDAYon MARVEL SUPER HERO NIGHT!  The Railers will wear an IRON MANthemed jersey on Diocese of Worcester & Catholic Schools Night presented by Assumption College. Saturday Night Signingswill feature a Railers player(s) signing autographs during the first intermission in the Fallon Health Pavilion.  Tickets are as low as $15!

On Sunday, Jan 26 the Railers host the Adirondack Thunder at 3pm on a KIDS GIVEAWAY SUNDAY with the first 1,000 kids 12-and-under receiving a Railers drawstring backpack presented by PEPSI Worcester.  Railers HC members are encouraged to bring their skates to the game for a skate with the team eventright after the game (more details to follow via a member email).  Score a SUNDAY FUNDAY ticket pack which includes four tickets and four beverage vouchers (beer/soda) for just $60!

ICYMI – Ricky Duranfrom The Voicewill sing the anthem and sign autographs before the Railers game on PINK in the RINK Nighton Saturday, Feb 8. More information at www.RailersHC.com.