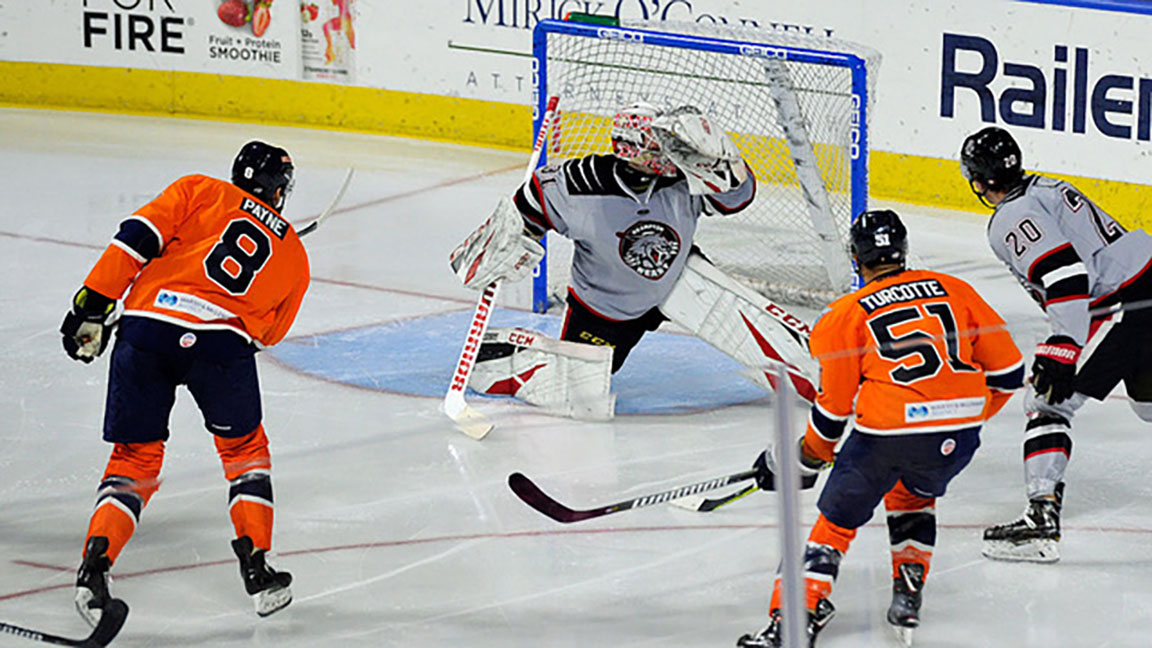 Railers special teams fail in 5-2 loss to the Beast

Worcester, MA– The Worcester Railers HC (4-8-0-0, 8pts) dropped their fourth straight home game in a  5-2 loss to the Brampton Beast (8-5-0-0, 18pts)on Thursday evening in front of 3,591 fans at the DCU Center on College Night. The Railers will travel to Brampton, ON to square off against the Beast on Sunday at 2pm.

Barry Almeida and Cody Payne scored goals for Worcester while Jakub Skarek made 16 saves in net for the loss. Brampton got goals from Lindsay Sparks, David Pacan, Jackson Leef, Daniel Leavens, and David Vallorani while Alex Dubeau made 24 saves in net for his fourth win of the season. Cody Payne extended his point streak to four games as Worcester fell to 2-4-0-0 on home ice in a game that featured 53 penalty minutes.

Kyle Thomas received a five-minute major for boarding with just 54 seconds left in the stanza and a game misconduct. The first shorthanded goal of the season for Worcester would come in the first period with just seven seconds left in the frame as Barry Almeida (3rd) capitalized on a mistake by goaltender Alex Dubeau. The Railers led 1-0 after 20 minutes and held a slight edge in shots 10-8.

Action picked up in the second frame with the Beast capitalizing on the five-minute power play scoring twice, started off by a wicked wrist shot from Lindsay Sparks (5th) at 2:53. Just 58 seconds later David Pacan (4th) would give Brampton a 2-1 lead at 3:51. A heavy forecheck from Yanick Turcotte allowed Cody Payne (4th) to skate to a loose puck in the right circle and snap one past the glove of Alex Dubeau tying things back 2-2 at 5:39. Things would stay the same as the two teams skated into their dressing rooms tied at 2-2.

Although the Railers received a power-play opportunity just 75 seconds into the third period it would be the Beast capitalizing on a turnover as Jackson Leef (3rd) finished off the play giving the Beast a 3-2 advatange. Just seven seconds after Daniel Leavens (4th) stepped out of the penalty box he was sprung on a breakaway and beat Jakub Skarek forehand backhand at 8:44. The fifth and final score of the night came from David Vallorani (4th) a few feet in front of the crease as he snuck a back hand shot through the wickets of Jakub Skarek as Brampton skated to a 5-2 road victory.

Notes: Three Stars: 3rd star…. Cody Payne (1-0-1) 2nd star: Lindsay Sparks (1-1-2) 1st star: Daniel Leavens (1-2-3)…. final shots were 26-21 in favor of Worcester…. Alex Dubeau (4-1-0) made 24 saves on 26 shots for Brampton.… Jakub Skarek (2-1-0) made 16 saves on 21 shots for Worcester while Evan Buitenhuis served as the backup…. Worcester went 0-for-7 on the power play while Brampton went 2-for-5…. Cody Payne (2-2-4) extended his point streak to four games…. Barry Almeida registered the Railers first shorthanded goal of the season…. 3,591 were in attendance for College Night with a Clark University student taking home 500 dollars cash after the t-shrt toss…. Tanner Pond (inj), Shane Walsh (inj), Jack Stander, and Anthony Florentino did not dress for Worcester…. Chris Rygus was released earlier this morning…. Jake Bolton was traded to Orlando for Jake Marchment…. Mike Cornell and Nic Pierog, and Linus Soderstrom are currently on recall with the Bridgeport Sound Tigers…. Yanick Turcotte picked up 14 penalty minutes and now has 47 penalty minutes through six games this season…. Worcester is now 7-8-1-2 all-time vs. the Beast and 5-4-1-0 at the DCU Center.

The Railers will travel to Brampton, ON to take on the Beast Sunday, Nov. 17 at 2pm.

On Sunday, November 24, the Railers host the Adirondack Thunder at 1:35pm on the first KIDS GIVEAWAY SUNDAY of the season!  The first 1,000 kids 12-and-under will receive a Worcester Railers blue jersey courtesy of Energy Monster!  With every Sunday game this season, fans can score a FAMILY FUN PACK starting at just $60 which includes four tickets and four beverages (either soda or beer).