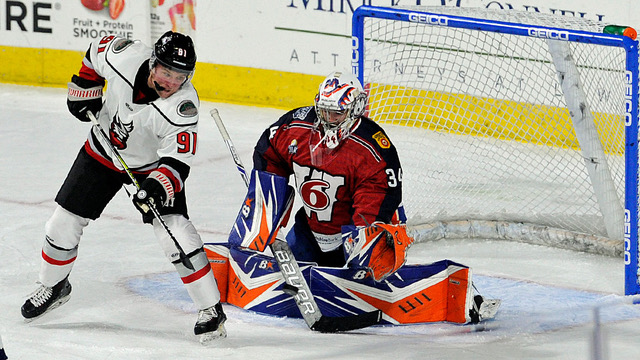 Meeting 4 of 14 vs. Adirondack this season

Worcester, MA– The Worcester Railers HC (3-5-0-0, 6pts) were dropped their fourth straight game and were shutout 2-0 vs. the Adirondack Thunder (5-2-0-1, 11pts)on Saturday evening in front of 4,806 at the DCU Center on W6 Tribute Night. The Railers travel to Glens Falls on Friday, November 8 to take on the Thunder at 7pm.

The Railers and Thunder played scoreless hockey for 48:30 minutes before Adirondack scored two third period goals from Mike Szmatula and Robbie Payne in a 2-0 win for the Thunder. Michael McNiven registered his second straight shutout stopping all 29 shots he faced while Evan Buitenhuis was solid in net making 28 saves for Worcester.

Adirondack outshot the Railers 15-6 in the opening frame, but the teams would head to the dressing room dead locked at 0-0. Evan Buitenhuis was perfect in net making 15 saves on all 15 shots.

The middle frame was another scoreless on for the Railers and Thunder as Worcester outshot Adirondack 9-8. Both teams had one power play, but neither was able to capitalize.

Mike Szmatula (1st) broke the ice in the contest giving the Thunder a 1-0 lead at 8:30 of the third period off of a pretty passing play from Nikita Popugaev and Hayden Verbeek. Adirondack was able to increase their lead on a three on two break finished off by Robbie Payne (3rd) passed the glove side of Evan Buitenhuis at 14:24. Worcester went on a four-minute power play after a double minor was assessed to Gabriel Verpaelst but the Railers were unable to capitalize and dropped their fourth straight game.

Notes: Three Stars: 3rd star…. Evan Buitenhuis (28 Saves) 2nd star: Mike Szmatula (1-0-1, +1, 4 shots) 1st star: Michael McNiven (29 save shutout)…. final shots were 30-29 in favor of Adirondack…. Michael McNiven (3-1-0) made 29 saves on 29 shots for Adirondack.… Evan Buitenhuis (0-3-0) made 28 saves on 30 shots for Worcester while Linus Soderstrom served as the backup…. Worcester went 0-for-4 on the power play while Adirondack went 0-for-3…. Ivan Chukarov (inj), Ryan Hitchcock (inj), Ross Olsson (susp), and Chris Rygus did not dress for Worcester…. Mike Cornell, Nic Pierog, and Jakub Skarek are currently on recall with the Bridgeport Sound Tigers…. Ross Olsson served his one game suspension after receiving an instigator penalty in the final five minutes of the game Friday…. Shane Walsh made his Railers debut with one shot…. Jordan Samuels-Thomas and JD Dudek led the Railers with five shots a piece…. Michael McNiven registered his second straight shutout and now has a streak of 127:17 without allowing a goal…. The Worcester Fire and Police skated in the Guns N’ Hoses game beforehand with the Worcester Fire winning 8-3…. Ray Bourque skated a half for both teams…. Worcester is now 17-8-2-0 all-time vs. the Thunder and 7-4-1-0 at the DCU Center.

On Friday, Nov 8 the Railers travel to Glens Falls, NY to battle the Adirondack Thunder at 7pm. Coverage begins at 6:35pm on 98.9 NASH Icon. The two clubs will battle again on Sunday, Nov 10 at 3pm. The Railers return home on Wednesday, Nov 13 for the annual School Day Game with a 10am start time vs. the Reading Royals.