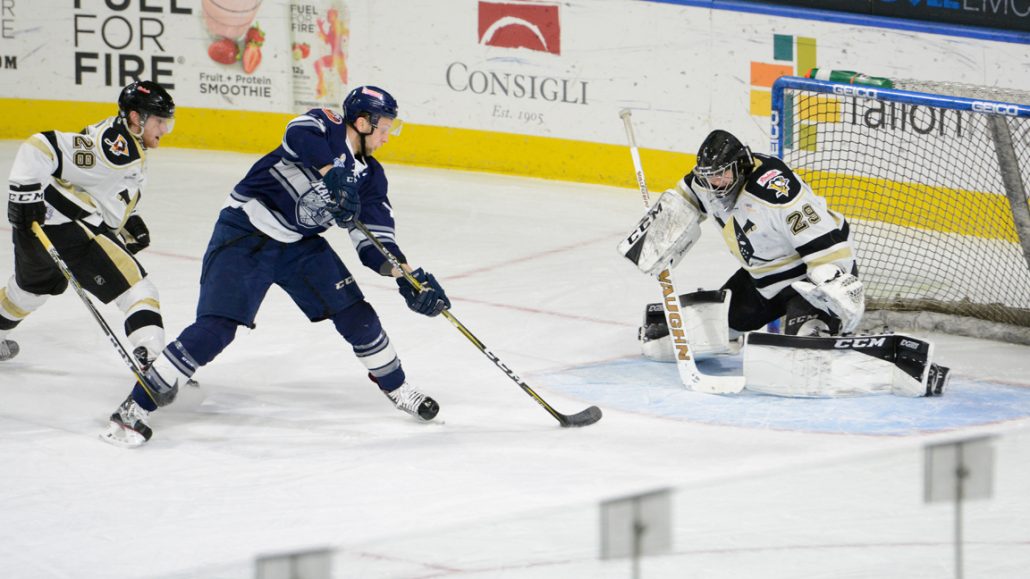 Meeting 8 of 9 vs. Wheeling this season

Worcester, MA – The Worcester Railers HC (28-25-4-3, 63pts) scored a season high six goals in a dominating 6-1 win over the visiting Wheeling Nailers (31-25-6-1, 69pts) in front of 4,287 fans at the DCU Center on Friday evening. The Railers 3-in-3 home weekend continues on a BIG GAME Saturday vs. Fort Wayne at 7pm with a St. Patrick’s Day celebration to benefit Be Like Brit presented by Country Bank.

Jeff Kubiak scored twice, Chris Langkow, Barry Almeida, Woody Hudson, and Frankie DiChiara also found the back of the net for Worcester while Mitch Gillam made 28 saves as the Railers are now six points behind the Nailers for the final playoff spot in the North Division – the Railers have three games in hand with 12 games left. Ryan MacKinnon and Kyle Schempp also added two assists as the Railers scored a season high four goals in the second period.

It was a back and forth first period of play with each team finishing their checks but unable to finish any scoring chances.  Mike Cornell and Troy Josephs dropped the mitts in a spirited bout at 2:51 as both teams went 0-for-1 on the power play. Both goaltenders made some big saves as Worcester held a 12-9 shot advantage through 20 minutes of play.

Worcester dominated the second period scoring a season high four goals and Yanick Turcotte (17th FM) dropped Jeremy Biernes (18th FM) with a series of lefts and rights in an entertaining fight.  Jeff Kubiak (12th) got the Railers on the board at 2:02 with a rebound strike past goaltender Adam Morrison.  Just 23 seconds later, Chris Langkow (18th) knocked in a loose puck after a Rayan MacKinnon shot at 2:25 to give the Railers a 2-0 lead.  Barry Almeida (19th) fired home a cross the crease pass by Nick Saracino at 8:38 and Jeff Kubiak (13th) crashed the net for a goal at 10:34 to put the Railers up 4-0 and end the night for goaltender Adam Morrison.  Worcester led 4-0 after 40 minutes and held a 28-18 shot advantage through two periods.

Danny Fick (4th) got Wheeling on the board at 9:58 of the third period with a slap shot from on top of the left circle with a screen in front of Mitch Gillam to cut the Railers lead to 4-1.  Woody Hudson (12th) gave the Railers a 5-1 advantage as he fired home a Yanick Turcotte rebound past goaltender Matt O’Connor at 12:15.  Worcester would record a franchise record 6th goal as Frankie DiChiara (6th) scored on the power play at 19:32 to give the Railers a dominating 6-1 home victory over the Wheeling Nailers.

Notes: Three Stars: 3rd star: Yanick Turcotte (assist, 17th fighting major) 2nd star: Mitch Gillam (28 saves, 15th win) 1st star: Jeff Kubiak (2-0-2) …Final shots were 39-29 in favor of Worcester…Adam Morrison (14-12-1) made 17 saves on 21 shots for Wheeling in 30:34 of play… Matt O’Connor made 15 saves on 17 shots in relief for the Nailers…. Mitch Gillam (15-13-1) made 28 saves on 29 shots in his 11th start in the last 12 games for Worcester… Will King was the backup goaltender for the Railers…. Worcester went 1-for-4 on the power play while Wheeling went 0-for-2…Josh Monk (inj), Justin Agosta (susp), Ben Masella (inj), Connor Doherty, Tommy Kelley and TJ Syner did not dress for Worcester…. before the game, Kyle Schempp was loaned from the Sound Tigers to the Railers and made his debut for Worcester and added two assists… Kellen Jones and Eamon McAdam are currently on recall with the Bridgeport Sound Tigers…. The Railers are now 10-2-1 in their last 13 games at the DCU Center…Ryan MacKinnon extended his point streak to six games (1-7-8) with two assists…. Jeff Kubiak has goals in back-to-back games (3-0-3)…. it was the first time this season the Railers scored four goals in a single period (2nd period)…the fight between Turcotte and Biernes was the 4th this season between the two combatants…Nick Saracino now has nine points (4-5-9) in eight games vs. the Nailers….Mike Cornell finished with 17 penalty minutes.

On Saturday, March 17 the Railers host the Fort Wayne Komets at 7:05pm on a BIG GAME SATURDAY with a St. Patrick’s Day celebration!  The Railers will be wearing a special St. Patrick’s Day themed jersey to benefit the Be Like Brit Foundation presented by Country Bank. The game worn jerseys will be auctioned off during the game with a select few auctioned off during a live post game auction. Wear your green to the game and help support the Be Like Brit Foundation!