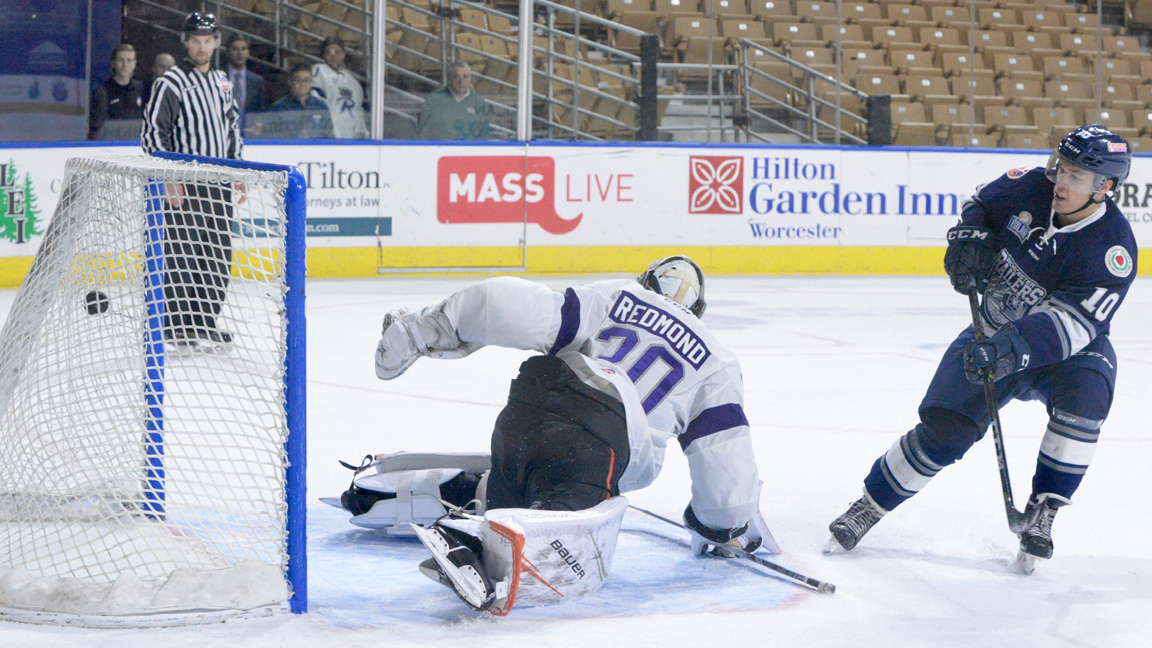 Meeting 3 of 6 vs. Reading this season

Railers school Royals in shootout in front of 6,043 on Wednesday morning

Worcester, MA – The Worcester Railers HC (4-8-1-0, 9pts) kicked off a busy home stretch with an exciting 3-2 shootout victory over the visiting Reading Royals (5-3-1-4, 15pts) in front of 6,043 fans at the DCU Center on Wednesday morning. The Railers host the Adirondack Thunder on COLLEGE NIGHT on Thursday, Nov 15 at 8:05pm.

Tyler Barnes and Ivan Kosorenkov scored in regulation for the Railers while Evan Buitenhuis made 33 saves in net in his third straight start.  Kosorenkov scored the only goal in the shootout and Buitenhuis made an unbelievable stop in the shootout to give the Railers their first win since Oct 26. Steven Swavely scored twice for the Royals while Angus Redmond made 32 saves in net for the road loss.

Reading would score the only goal in a fast paced first period of play as Steven Swavely (3rd) turned a Railers turnover into a quick shot from 40 feet through a screen that found its way through netminder Evan Buitenhuis at 13:33.  Nick Sorkin had the best opportunity for Worcester after he took a feed from Tyler Barnes on a 2-on-1 but Angus Redmond made a sprawling save to give the Royals a 1-0 lead through 20 minutes of play.  Shots were 13-9 in favor of Reading.

The Railers would score just their fourth power play goal of the season as Mike Cornell sent a drive from the left point that was deflected in front by Tyler Barnes (3rd) at 11:36 of the second period to tie the score at 1-1.  Both teams had several great chances in the middle frame but both goaltenders stood their ground as the Railers held a 23-21 shot advantage through 40 minutes of play.

In the third period, rookie Ivan Kosorenkov buried a turnover at 15:51 from in-between the circles to give the Railers their first lead of the game at 2-1.  But the Royals would tie the score with the extra attacker with just 54 seconds remining as Steven Swavely deflected a point shot into the net to force overtime.

A wide-open overtime period saw great chances at both ends before the two clubs headed to the three-round shootout. Ivan Kosorenkov scored in the first round for the Railers while Mike Huntebrinker was robbed by a last-ditch effort by Evan Buitenhuis as the Railers took the 3-2 home victory.

Notes: Three Stars: 3rd star: Ivan Kosorenkov (Goal and Shootout goal) 2nd star: Ryan Hitchcock (6 shots) 1st star: Steven Swavely (2 goals)….Final shots were 35-35… Angus Redmond (0-2-0-3) made 32 saves on 34 shots for Reading and made 2 of  3 stops in the shootout…. Evan Buitenhuis (2-3-1-0) made 33 saves on 35 shots for Worcester and stopped all three shooters in the shootout….while Charlie Millen served as the backup…. Worcester went 1-for-4 on the power play while Reading went 0-for-2…. Tommy Kelley (inj), Yanick Turcotte (inj), Connor Doherty, Alex Vanier, Malcolm Gould (inj), Nick Bligh, and Mitch Gillam (inj) did not dress for Worcester…. Jeff Kubiak is currently on recall with the Bridgeport Sound Tigers…. Matty Gaudreau and Ryan Hitchcock were inserted into the Railers lineup after they were loaned back from Bridgeport earlier in the week…..Ryan Hitchcock had six shots on goal for Worcester but was denied in the shootout….Tyler Mueller had an assist and added five shots on goal…with the win, the Railers snapped a franchise high seven game losing skid.

On Thursday, Nov 15 the Railers host the Thunder at 8pm on College Night presented by Chipotle and the US Army! The 1st1,000 fans will receive a BOGO burrito offer from Chipotleand the Railers will host the largest t-shirt tossin Worcester’s pro hockey history in the first intermission – 1 t-shirt will contain $500! College tickets start at just $10 with a college ID!

On Saturday, Nov 17 the Railers host the Orlando Solar Bears at 7pm on a BIG GAME SATURDAY with NE Patriot Matthew Slatersigning autographs presented by Energy Monster from 6-8pm!  The doors will open at 3pm for the Worcester Blades vs. Montreal Canadiennes at 3:30pm.  1 ticket gets you entry into both games starting at just $15!

The Railers Tavern, located behind the DCU Center provides hockey fans with a great pregame and postgame atmosphere all season long. Watch all road games broadcast live at Nonna’s (FRI, SAT, SUN) or Railers Tavern (MON-THU) or watch on ECHLTV.com for a small fee. Listen to all Railers games live on 98.9 Nash ICON. with coverage beginning 30 minutes before puck drop with Eric Lindquist and Tom Matthews. Full season memberships, mini plans, and group tickets are on sale now by calling the Railers front office at 508-365-1750 or by visiting www.RailersHC.com.