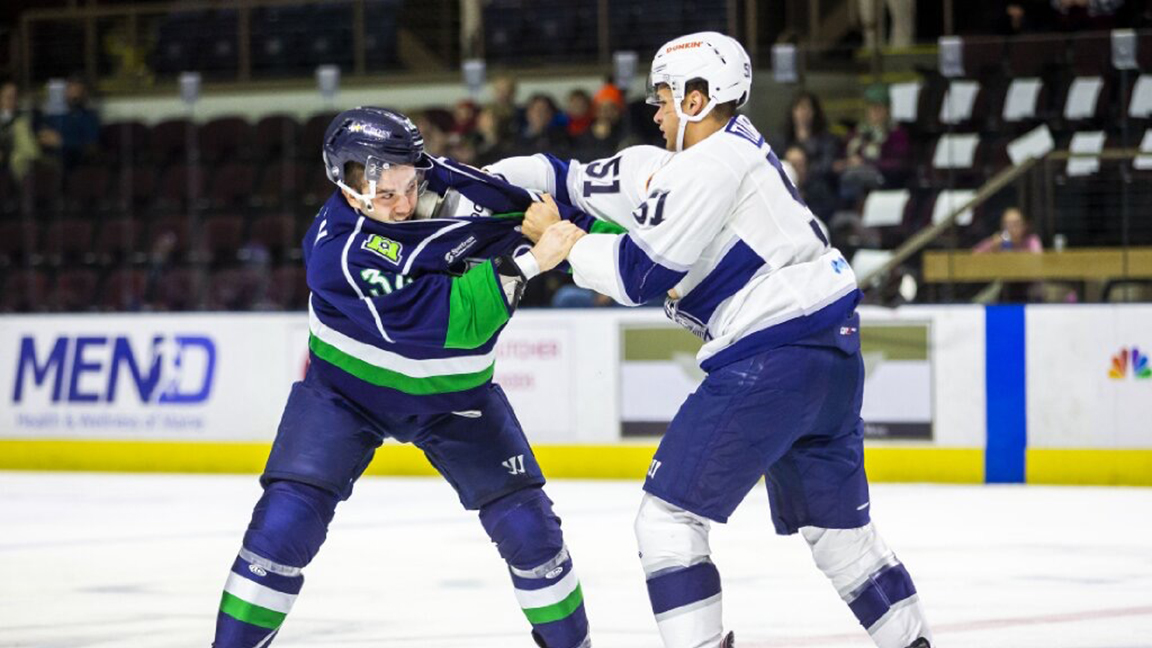 Worcester Railers HC at Maine Mariners
January 14, 2020
Cross Insurance Arena
Meeting 6 of 18 vs. Maine this season
Railers are 2-3-1-0 vs. the Mariners this season

Railers Robbed Up in Maine in 3-2 Loss

Arnaud Durandeau and Drew Callin each scored goals for Worcester while Evan Buitenhuis made 43 saves in net for the loss. Yanick Turcotte picked up his second fighting major of the season which was a marathon lasting 62 seconds with Morgan Adams-Moisan. The Railers received just five power-plays while Maine received eight. Maine scored all of their goals on power-plays from Ted Hart, Morgan Adams-Moisan, and Terrence Wallin while Connor Lacouvee made 36 saves in net for the win.

On his 21stbirthday Arnaud Durandeau (3rd) would break the ice at 9:50 of the first period after redirecting a point shot from Justin Murray with Ryan MacKinnon also collecting an assist to give the Railers a 1-0 lead. At 7:55 of the period Yanick Turcotte (2ndFM) squared off with Morgan Adams Moisan (3rdFM) for 62 seconds as the two would serve five-minute majors for fighting. Worcester led 1-0 through 20 minutes of play and outshot Maine 20-18.

Maine would tie the game at 1-1 at 16:47 in the second stanza when Ted Hart (7th) trailing the play found the puck in the high slot and buried it by Evan Buitnehuis for a power-play score. Just 24 seconds later Drew Callin (8th) from the inner left circle was able to corral the puck and send it by Connor Lacouvee to give the Railers a 2-1 advantage. Feisty play broke out in the final minutes of the stanza as Ben Thomson (1stFM) squared off with Brandon Crawley (2nd) at 18:39. Just 16 seconds later after Drew Callin received a dirty hit by Mikael Robidoux, Kyle Thomas (2ndFM) and received a fighting major as well as a 10 minute game misconduct for the aggressor while Robidoux only received two minutes for charging.    Worcester led 2-1 after 40 minutes of play and held the shot edge 31-29.

The Mariners tied the game at 2-2 on their seventh power-play of the game which came off the stick of Morgan Adams-Moisan (3rd) at 12:34. Then on the power-play again just 79 seconds later Terrence Wallin (17th) gave Maine their first lead of the game 3-2. Four penalties were called in the final stanza as the Railers only got one power-play vs. the Mariners three and a pair of goals from the Mariners gave the home team the 3-2 win.

Notes: Three Stars: 3rd star: Evan Buitenhuis (43 saves) 2nd star: Connor Lacouvee (36 saves, Win) 1st star: Morgan Adams-Moisan (1-0-1, FM) …. final shots were 45-38 in favor of Maine…Connor Lacouvee (11-9-1) made 36 saves on 38 shots Maine… Evan Buitenhuis (9-12-1) made 42 saves on 45 shots for Worcester while Ian Milosz served as the backup…. Worcester went 0-for-5 on the power play while Maine went 3-for-8…. Kyle McKenzie (inj,), Jordan Samuels-Thomas (inj), JD Dudek (IR), Tanner Pond (IR), Connor Doherty, and Cody Payne did not dress for Worcester…. Mike Cornell, David Quenneville, Linus Soderstrom, Jakub Skarek are all currently on recall with the Bridgeport Sound Tigers…. Nic Pierog’s team long six game point streak came to an end…. Arnaud Durandeau (3-2-5) extended his point streak to three games…. 20 shots in the first period for Worcester was the most shots for in a period this season…. The Railers are 11-11-1 under David Cunniff…. The three fighting majors from the Raielrs was the most in a single game this season…. Yanick Turcotte, Ben Thomson, and Kyle Thomas all received fighting majors…. The Railers are 6-7-4-3 all-time vs. the Mariners….  The Railers are 1-4-2-2 all-time at the Cross Insurance Arena.

What’s on tap –Four More on the Road!

The Railers will take on the Adirondack Thunder Saturday Jan. 18 before a pair of games Sunday and Monday in Reading. The five-game road stand will close on Friday Jan. 25 vs. the Maine Mariners.

On Saturday, Jan 25 the Railers host Maine Mariner at 7pm on a BIG GAME SATURDAY on MARVEL SUPER HERO NIGHT!  The Railers will wear an IRON MAN themed jersey on Diocese of Worcester & Catholic Schools Night presented by Assumption College. Saturday Night Signings will feature a Railers player(s) signing autographs during the first intermission in the Fallon Health Pavilion.  Tickets are as low as $15!

On Sunday, Jan 26 the Railers host the Adirondack Thunder at 3pm on a KIDS GIVEAWAY SUNDAY with the first 1,000 kids 12-and-under receiving a Railers drawstring backpack presented by PEPSI Worcester.  Railers HC members are encouraged to bring their skates to the game for a skate with the team event right after the game (more details to follow via a member email).  Score a SUNDAY FUNDAY ticket pack which includes four tickets and four beverage vouchers (beer/soda) for just $60!

Ricky Duran to perform national anthem at the Worcester Railers Game on Feb...
Scroll to top