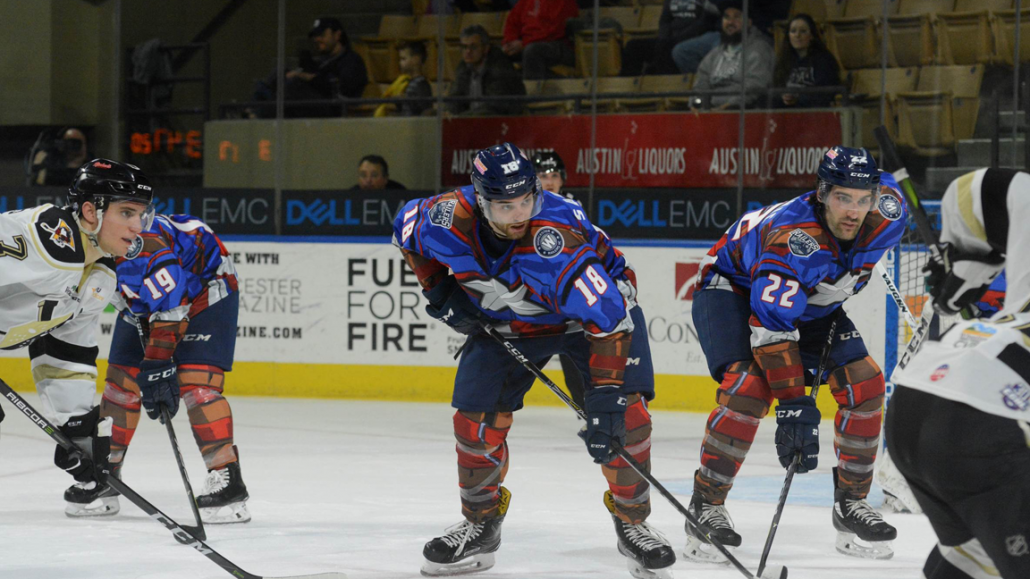 Meeting 6 of 9 vs. Wheeling this season

WORCESTER, MA – The Worcester Railers HC (25-23-4-3, 57pts) returned home after a season long seven game road trip and defeated the visiting Wheeling Nailers (29-23-6-0, 64pts) in front of 3,769 fans at the DCU Center on Friday evening.   The Railers host the Nailers again on a BIG GAME Saturday with the first 3,000 fans receiving a Captain America bobble courtesy of Cornerstone Bank.

Chris Langkow (1-2-3), Barry Almeida (1-1-2), and Nick Saracino (1-1-2) all had big nights for Worcester while Mitch Gillam made 30 saves in net for his third shutout of the season as the Railers moved within seven points of the Nailers for the final playoff spot in the North Division – the Railers have three games in hand.  TJ Syner and Ryan MacKinnon also scored for Worcester and Brock Beukeboom finished with a +5 rating in the dominating win.

The Railers charged out to a 3-0 first period lead led by Chris Langkow’s three points (1-2-3) in the opening frame.  Barry Almeida (18th) scored just 84 seconds in with a rush towards the top of the crease assisted by Chris Langkow and Nick Saracino.  Chris Langkow (16th) scored on a semi-breakaway shorthanded opportunity at 6:09 to dazzle the crowd with a highlight reel goal past goaltender Matt O’Connor.  Nick Saracino (8th) batted home a loose rebound to put Worcester ahead 3-0 at 11:25. Mitch Gillam made 10 first period saves as Worcester was outshot 10-6 but led 3-0 after 20 minutes of play.

Mitch Gillam made 11 mores saves in the second period and TJ Syner (6th) gave Worcester a 4-0 lead at 18:47 as he fired home a Connor Doherty rebound into the net past the Wheeling netminder.  The Railers had a 4-0 lead through 40 minutes and held a 22-21 shot advantage.

Ryan MacKinnon (1st) scored his first professional goal with a seeing eye shot from the left point through a mess of skates and sticks at 7:52 to give the Railers a 5-0 lead in the third period.  Mitch Gillam made nine more saves in the third period for his third shutout of the season as he made 30 total saves for his 12th win of the season.

Notes: Three Stars: 3rd star: Chris Saracino (1-1-2) 2nd star: Mitch Gillam (30 saves, Win) 1st star: Chris Langkow (1-2-3) …Final shots were 35-30 in favor of Worcester…. Matt O’Connor (2-9-2) made 30 saves on 35 shots for Wheeling…Jason Pucciarelli was the backup for the Nailers…. Mitch Gillam (12-12-1) made 30 saves on 30 shots for Worcester in his 6th straight start… Will King was the backup goaltender for the Railers…. Worcester went 0-for-3 on the power play while Wheeling went 0-for-4…Josh Monk (inj), Ashton Rome (inj), Yanick Turcotte, and Vinny Muto did not dress for Worcester….Kellen Jones, Matty Gaudreau, Mike Cornell and Eamon McAdam are currently on recall with the Bridgeport Sound Tigers….Brian Bowen, Matt Lane, and Connor Doherty also picked up assists for Worcester in the win…the three goals scored in the first period tied a season high for the Railers….the five goals tied a season high for most goals in a game for Worcester….Nick Saracino now has seven points (3-4-7) in five games vs. Wheeling….Gillam now is tied for the ECHL lead with three shutouts this season.

What’s on tap? –3-in-3 weekend continues for Railers!

On Saturday, March 3 the Railers host the Wheeling Nailers at 7:05pm on a BIG GAME SATURDAY!  The first 3,000 fans will receive a Captain America bobble presented by Cornerstone Bank!  It’s Marvel weekend as the Railers will wear a special Marvel themed jersey and Captain America will be in attendance!

On Sunday, March 5 the Railers host the Manchester Monarchs at 3:05pm on a KIDS GIVEAWAY SUNDAY! The first 1,000 kids 12-and-under will receive Railers HC thunder sticks.  Score a FAMILY FUN PACK at every Sunday game which includes four tickets, four hotdogs, and four sodas for just $80!