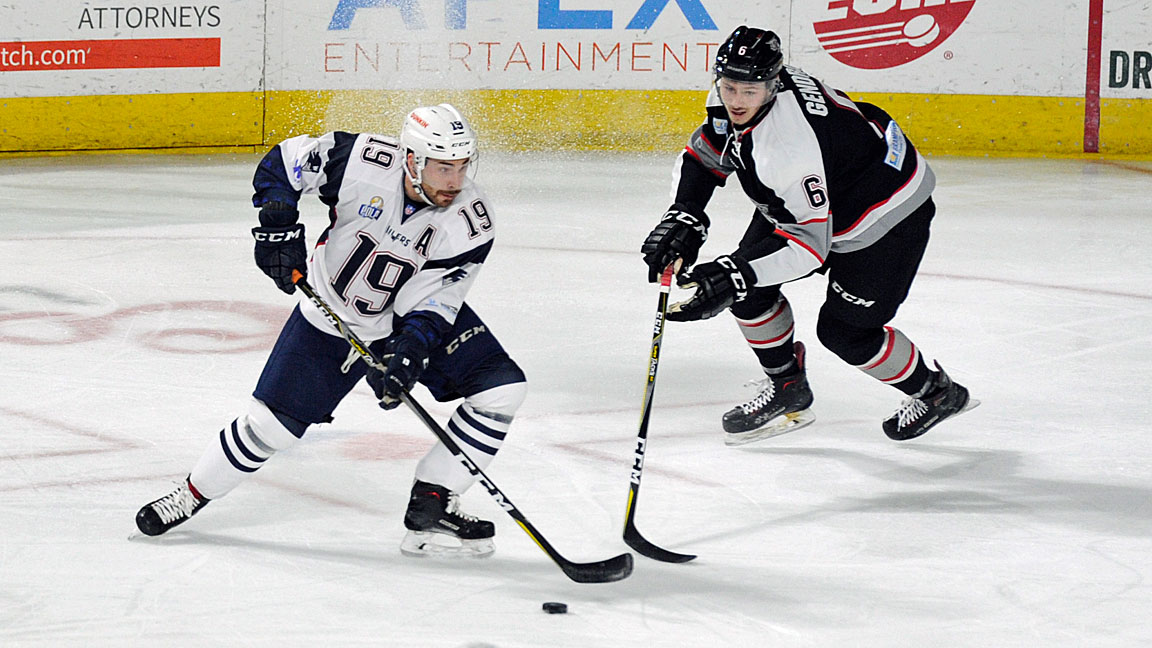 Meeting 7 of 8 vs. Brampton this season

Railers play like NY Jets in 7-0 loss to Beast

Worcester, MA– The Worcester Railers HC(30-27-6-4, 70pts)gave up a touchdown in a 7-0 loss to the visiting Brampton Beast (34-28-5-1,74pts) in front of 5,600 fans at the DCU Center on Saturday evening. With the loss,the Railers are now four points behindBrampton for the fourth and final playoff spot in the North Division with five games remaining. Worcester will host the Brampton Beast again on Sunday at 3pm with the first 3,000 fans receiving a team photo presented by Jimmy Johns.

With the Lombardi trophy in the building, Worcester was shutout for the 4thtime this season as Mitch Gillam allowed four goals on 19 shots before getting replaced midway through the second period. Jackson Leef (2-0-2), Daniel Ciampini (1-2-3), and Boston Leier (1-2-3) led the way offensively for Brampton while Jake Paterson made 30 saves in net as Worcester dropped their fifth straight game (0-4-1-0).

Each team had nine shots on goal and Barry Almeida hit the post, but it was the Beast that grabbed a 2-0 lead through 20 minutes. Jordan Leaf (10th) had the puck go off his chest and into the net at 6:02 and David Pacan (27th) lit the lamp with a shot through a screen at 10:37.

Brampton piled things on in the second period with three more goals on 14 shots.  Jackson Leef (11th) gave the Beast a 3-0 lead at 3:31 with a rush down the leftwing side and Artur Tianulin (18th) scored on a rebound at 12:17 to end the night for goaltender Mitch Gillam.  Daniel Ciampini (14th) lit the lap on the power play at 18:23 to end the onslaught as Worcester trailed 5-0 after 40 minutes of play.

The Beast grabbed two more goals in the third period on netminder Blake Wajtala as Boston Leier (3rd) struck on the power play at 1:53 and Mike Folkes (1st) sent a blast from the point at 4:44 to end the scoring.  Worcester outshot Brampton 11-7 in the third period but Jake Paterson held his own and ended with a 30 save shutout.

Notes: Three Stars: 3rd star: Jake Paterson (30 saves, Win) 2nd star: David Pacan (1-1-2) 1st star: Jackson Leef (2-0-2) …. final shots were 30-30…Jake Paterson (10-12-1) made 30 saves on 30 shots Brampton… Mitch Gillam (19-15-5) made 15 saves on 19 shots for Worcester….Blake Wajtala made 8 saves on 11 shots in relief…. Worcester went 0-for-5 on the power play while Brampton went 2-for-6…. Kyle McKenzie (inj), Tommy Panico (inj), Alex Vanier (inj), Evan Buitenhuis (inj), Ross Olsson, Ivan Chukarov, Drew Callin, and Tommy Kelley did not dress for Worcester….Mike Cornell (BRI) and Nick Sorkin (BNG) were both in the lineup for Worcester after their loan back from the AHL…. Railers are now 16-11-5-1 on home ice this season… the Railers have 5 games remaining (3 home, 2 road)… Worcester now has 48 fighting majors this season – they had 45 last season…. Josh Holmstrom and Mike Cornell each had five shots on goal… Worcester had not allowed a power play goal in 10 straight games (22-22) before allowing two tonight….Yanick Turcotte leads the entire ECHL with 17 fighting major penalties (9 home, 8 away) and added 16 more penalty minutes for 171 total this season….the Railers wore NE football inspired jerseys and the Lombardi Trophy made an appearance before the game….Worcester has scored just three goals total in their last 12 periods of play.