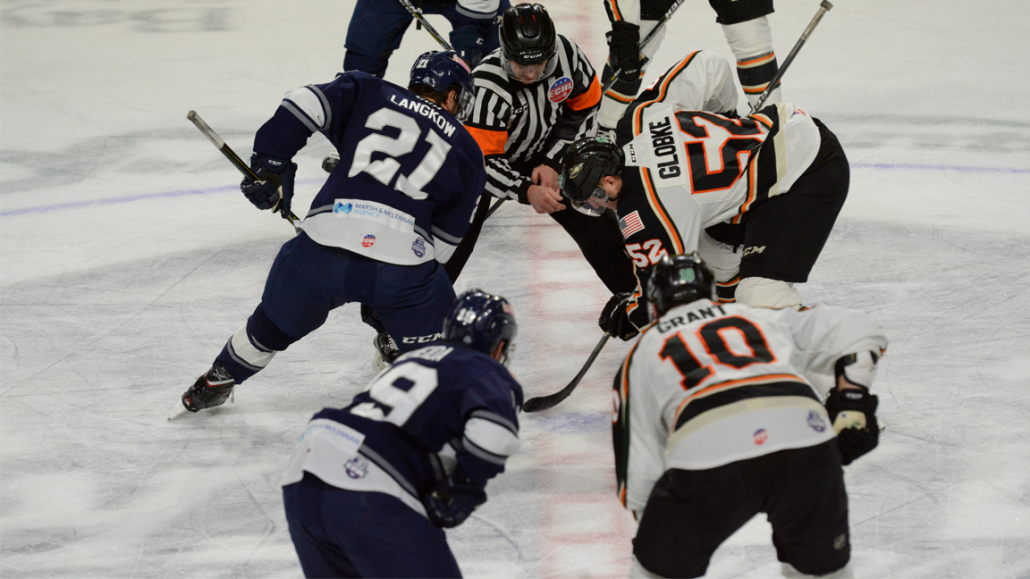 Meeting 2 of 2 vs. Quad City this season

Worcester went 2-0-0-0 vs. the Mallards this season

Railers pick up a BIG win on BIG GAME SATURDAY in front of 4,439 at DCU Center

Worcester, MA – The Worcester Railers HC (17-19-3-2, 39pts) picked up their second straight win with a 5-2 victory over the visiting Quad City Mallards (11-24-3-1, 26pts) in front of 4,439 fans at the DCU Center on Saturday evening. The Railers eleven game homestand continues on Sunday, Jan 28 at 3:05pm on a KIDS GIVEAWAY SUNDAY vs. the Florida Everblades with the first 1,000 kids 12-and-under receiving a Railers youth hockey jersey presented by Energy Monster.

Brock Beukeboom recorded three points (1-2-3) which included his first professional goal, Matty Gaudreau (1-1-2) struck again on the power play, Nick Saracino (1-1-2), Chris Langkow (1-1-2), and Matt Lane also found the back of the net as the Railers improved to 2-3-0-0 on their eleven game homestand.  Eamon McAdam made 26 saves in net for his second straight win and 10th overall while the Railers scored two power play goals in their second straight game.

Railers rookie Connor Doherty picked up his first pro fighting major in the opening minute vs. Jake Bolton to set the tone in the opening frame and got the crowd buzzing. The Railers scored a power play goal in their season high fifth straight game as Matty Gaudreau (8th) fired the puck from the left circle with Chris Langkow providing a screen from on top of the crease at 17:56 to give the Railers a 1-0 lead.  Quad City would tie the score at 1-1 in the closing seconds after a faceoff win to the left of Eamon McAdam and a deflected shot from the point that was cleaned up at the side of the net by Triston Grant (5th) at 19:47. Shots were 12-8 Railers through 20 minutes of play.

Nick Saracino (4th) gave the Railers a 2-1 lead at 6:21 of the second period with a great deflection of a Brock Beukeboom shot that flared past goaltender Ivan Kulbakov.  Worcester would go ahead by two goals at 18:58 as Brock Beukeboom (1st) scored his first professional goal on the power play with a shot from five feet on top of the right circle that just broke through the Mallards netminder and just trickled over the goal line.  The Railers led 3-1 after 40 minutes and held a 23-19 shot advantage through two periods of play.

Chris Langkow (10th) extended the Railers lead to 4-1 at 3:48 of the third period after Matty Gaudreau stole the puck on the forecheck and found Langkow alone in the slot.  Yanick Turcotte (15th FM) dropped Travis Armstrong in a one-sided fight at 4:08 as the physical play continued. Brayden Low (8th) struck on the power play at 11:15 to cut the Railers lead to 4-2.  But Matt Lane (5th) answered right back just 46 seconds later to cap the score and give the Railers a 5-2 victory for the second straight game over the Mallards.

Notes: Three Stars: 3rd star: Nick Saracino (1-1-2) 2nd star: Matty Gaudreau (1-2-3) 1st star: Brock Beukeboom (1-2-3) …Final shots were 36-28 in favor of Worcester… Ivan Kulbakov (8-8-0) made 31 saves on 36 shots for Quad City…. Eamon McAdam (10-9-5) made 26 saves on 28 shots for Worcester…Mitch Gillam was the backup goalie…. Worcester went 2-for-4 on the power play while Quad City went 1-for-4… Worcester has a power play goal in five straight games (7-19)…..Josh Monk (inj), Ashton Rome (inj), Tommy Kelley, Sean Gammage did not dress for Worcester….it was the same exact lineup as Friday night for the Railers…. Kellen Jones and Mike Cornell is currently on recall with the Bridgeport Sound Tigers…. Worcester improved to 8-10-1-0 on home ice….Nick Saracino (1-6-7) has a five-game point streak… Matty Gaudreau has three power play goals in his last two games….Barry Almeida now has ten points (4-7-11) in his last eight games as he added two assists and had a game high seven shots on goal….the Railers now have 31 fighting majors as Yanick Turcotte has dropped the gloves in four straight games….Matt Lane (1-2-3) now has a three game point streak.

Railers offense shines in 5-2 home victory over the MallardsRailers win come from behind thriller 3-2 in front of 4,754 fans at DCU Cen...
Scroll to top