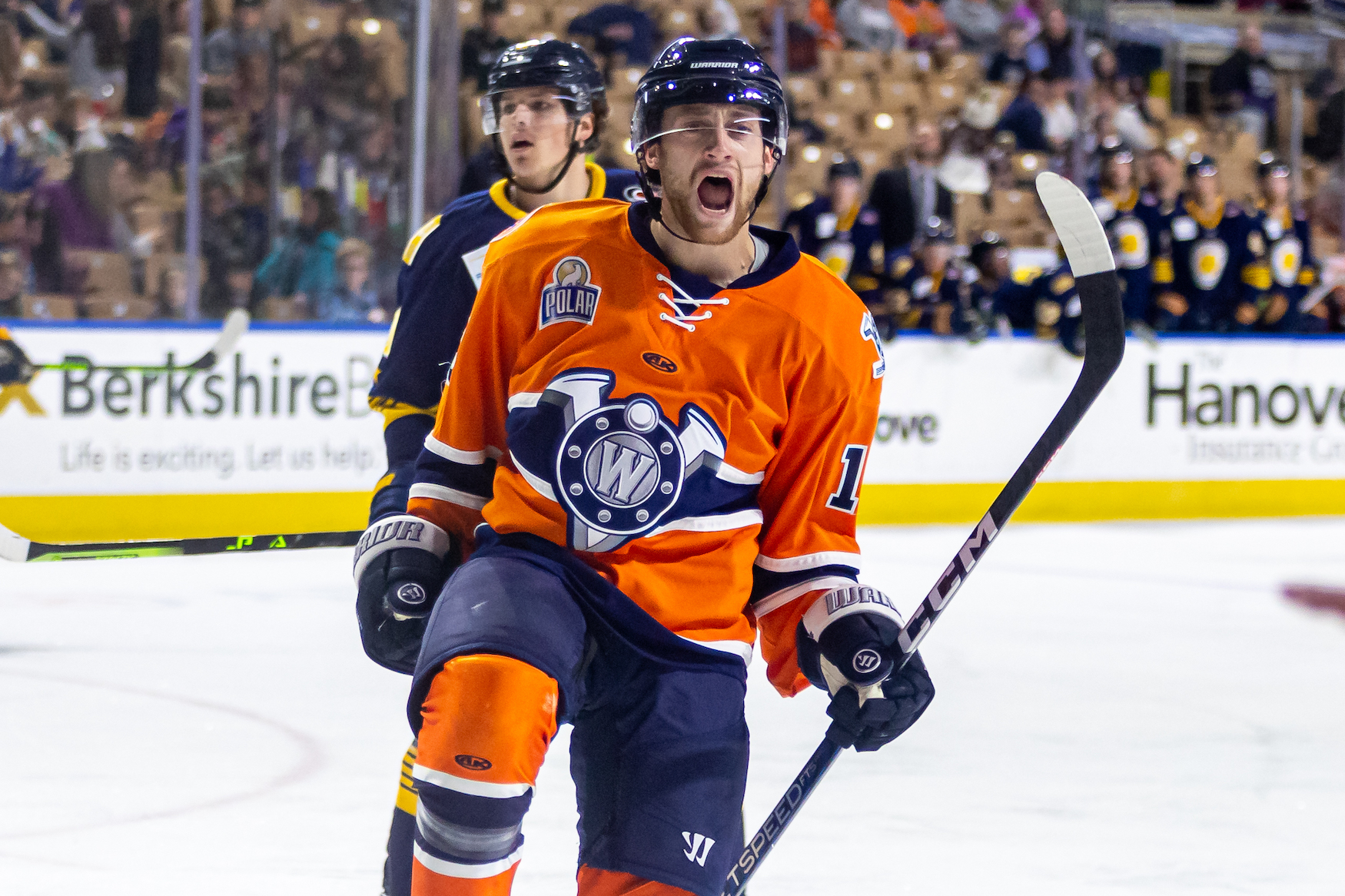 WORCESTER – The Railers’ next Magic Number is 12.

Their 5-3 victory over the Norfolk Admirals Tuesday afternoon was a record-setting ninth straight. It is the best start to a season in ECHL history and the longest winning streak in Worcester pro hockey history.

Tuesday’s triumph was a School Day game and was achieved before a noisy — at times the players could not hear the whistles — crowd of 7,209. It was the 10th largest crowd in franchise history and the Railers do love the big crowds.

Tuesday, Worcester got a pair of goals from Jacob Hayhurst and single goals from Bobby Butler, Jimmy Lambert and Reece Newkirk. Lambert also had an assist. No Railer has had a hat trick this season but the team has had five players with two goals in a game.

This would be a good strategy for coach Jordan Smotherman — assign someone to score two goals. Worcester is 57-12-5 through the years when one of its players has more than one goal.

A nine-game winning streak is a big one over a 72-game schedule and the Railers have played a lot of good hockey to break the record.

“We’re a fast team,” Smotherman said, “and when we take time and space away from the other team we’re gonna win games.

“We had fairly average first and second periods and between the second and third we talked about it and said, ‘Hey, just get back to your game’ and we did exactly that.”

Hayhurst showed his natural speed last year in establishing himself as dangerous player but stepped everything up a notch this season. Sometimes looks are deceiving from above the ice, but no so with Hayhurst.

“Oh, he’s that fast,” Smotherman said, “and he’s actually even faster this year which is hard to believe. We have a couple of guys this year like that. They’ve added a step or more than that, even two steps.”

The Admirals came out strongly for new coach Jeff Carr. Norfolk fired Rod Taylor on Monday and the players had a little extra adrenaline in the early going. Norfolk scored first with Kenny Hausinger making it 1-0 at 5:09 of the first period.

Tuesday’s victory ended Worcester’s homestand. The Railers hit the road for a pair of games in Glens Falls this weekend against the Adirondack Thunder. Worcester is 18-1-1 all-time on the shores of Lake George.

MAKING TRACKS – Inevitably, Ryan MacKinnon has been recalled by Bridgeport where he should get a lot of playing time. … Noah Delmas, Nolan Vesey and Brent Beaudoin did not dress for the Railers. … The door to the visitors tunnel is out of alignment and pucks are taking crazy bounces off it, especially on clearout plays. … The ceremonial first puck drop was historic to some extent. It was done by a WPI robot and taken by Butler (35 years old) and Norfolk’s Nick Schaus (36), two of the ECHL’s most senior players. Both picked up points as Butler had a goal, Schaus an assist. … Myles McGurty is way ahead of last year’s points curve. The defenseman had an assist Tuesday and has six points — all assists — in eight games. It took him 43 games to get to six points last season. … This trifecta was the Admirals’ only visit to the DCU Center for the regular season. The Railers reciprocate later this month with a three-game sojourn to Norfolk from the 23rd through the 26th, then go back to Virginia for two more in February. … Butler’s goal was his first at the DCU Center this season and snapped a streak of six straight goals on the road going back to last year. … Brad Jones is the Admirals’ Director of Hockey Operations and is no stranger to Worcester. He played two years of hockey at Becker in 2007-08 and ’08-’09.