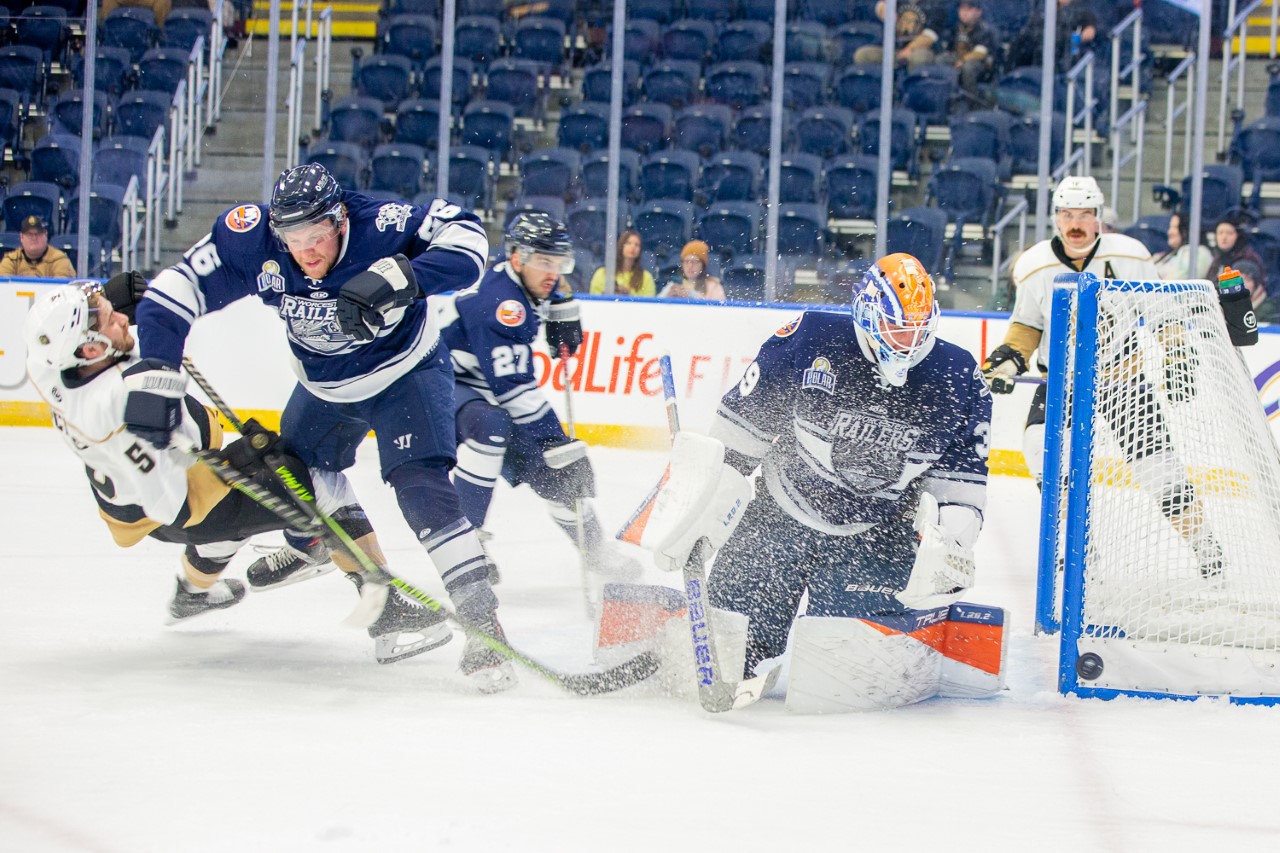 Meeting 2 of 12 vs Newfoundland this season

Railers are 2-0-0-0 against the Growlers

Repaci, Butler each score in first game back in lineup

Anthony Repaci returned after missing the trip down to Norfolk, and quickly made his presence known scoring on the Railers first of the game on the power play. His one-timer slapshot soared past Growler defenders, and Goalie Luke Cavallin for the first goal of the game to make it 1-0 Worcester. Reese Newkirk would extend the Railers lead to 2-0 after he found himself on the break. He skated past one defender and scored off the backhand to the far side of the net. Zach O’Brien’s slapshot on the Growlers second powerplay would find its way to the back of the net and make it 2-1 Railers. Bobby Butler, also returning after missing the Norfolk trip, would extend the lead back to two after finding himself wide open in front of the Growlers goal, and tapped one in for the score, 3-1 Worcester. The Growlers would capitalize on a five on three situation when Orrin Centazzo put one in the back of the net to get the Growlers back to within one at 3-2. Anthony Repaci scored his second of the night when Reese Newkirk caught him cutting backdoor, to give the game its final score of 4-2

The Growlers took the first six shots of the game, but the Railers got the first goal of the game on the power play nine minutes into the first period. Late in the power play, the Railers were able to get a tally thanks to the returning Anthony Repaci. He fired a set of slap slapshots at the end of the powerplay scoring on the last one with the pass coming from Phil Beaulieu. The puck flew past the blocker of righty goaltender Luke Cavallin and put the Railers up 1-0. With fifty seconds left in the period, Reese Newkirk found himself on the break. He beat one defender and then scored off the backhand to the far side post and put Worcester up 2-0 going into the 2nd period. This would be the tenth time this season the Railers would open a game with a 2-0 lead. The Growlers outshot the Railers 13-9.

Worcester found themselves down a man within the first minute and forty seconds into the 2nd period. The Growlers capitalized on that opportunity. Zach O’Brien loaded up his cannon and fired one past Henrik Tikkanen to give the Growlers their first goal of the game. Worcester regained their two-goal lead three minutes later as Bobby Butler, who also returned after he missed the Norfolk trip, would find himself wide open in front of Cavallin, and score. Worcester was back ahead by two once again, 3-1. The Railers found themselves back on the penalty kill with eight minutes left to go in the second. With nine seconds left on the penalty kill the Railers were whistled for another penalty, creating a five-on-three opportunity for Newfoundland. The Growlers capitalized as the first penalty expired, with Orrin Centazzo putting in behind Tikkanen to make it 3-2 Worcester. With just under five minutes to go, Reese Newkirk found Anthony Repaci as he cut to the crease for the Railers’ fourth goal of the night to make it 4-2 Worcester. The Railers again found themselves on the penalty kill, but Newfoundland shortly found one of their players in the penalty box making it four-on-four. Worcester led 4-2 at the end of the second period. The Growlers outshot the Railers 27-14 through two periods.

Both teams would get good opportunities to open the final period of play but neither team was able to score on their opportunities. The Railers would be back on the power play with eleven left to play in the third period. Worcester was unable to score on the power play but that wasn’t due to a lack of opportunity. Cavallin made a set of saves to help kill the penalty as Worcester buzzed in the attacking end. Both teams continued to go back and forth trading shots on goal, but neither team was able to score. Worcester did a better job of maintaining possession in the neutral zone throughout the third period. The Growlers pulled Cavallin with two minutes and thirty seconds left in regulation while they had the puck in their defensive zone in an effort to get back into the game. The extra man however would not be enough to get a third goal past Tikkanen, as the Railers won 4-2.