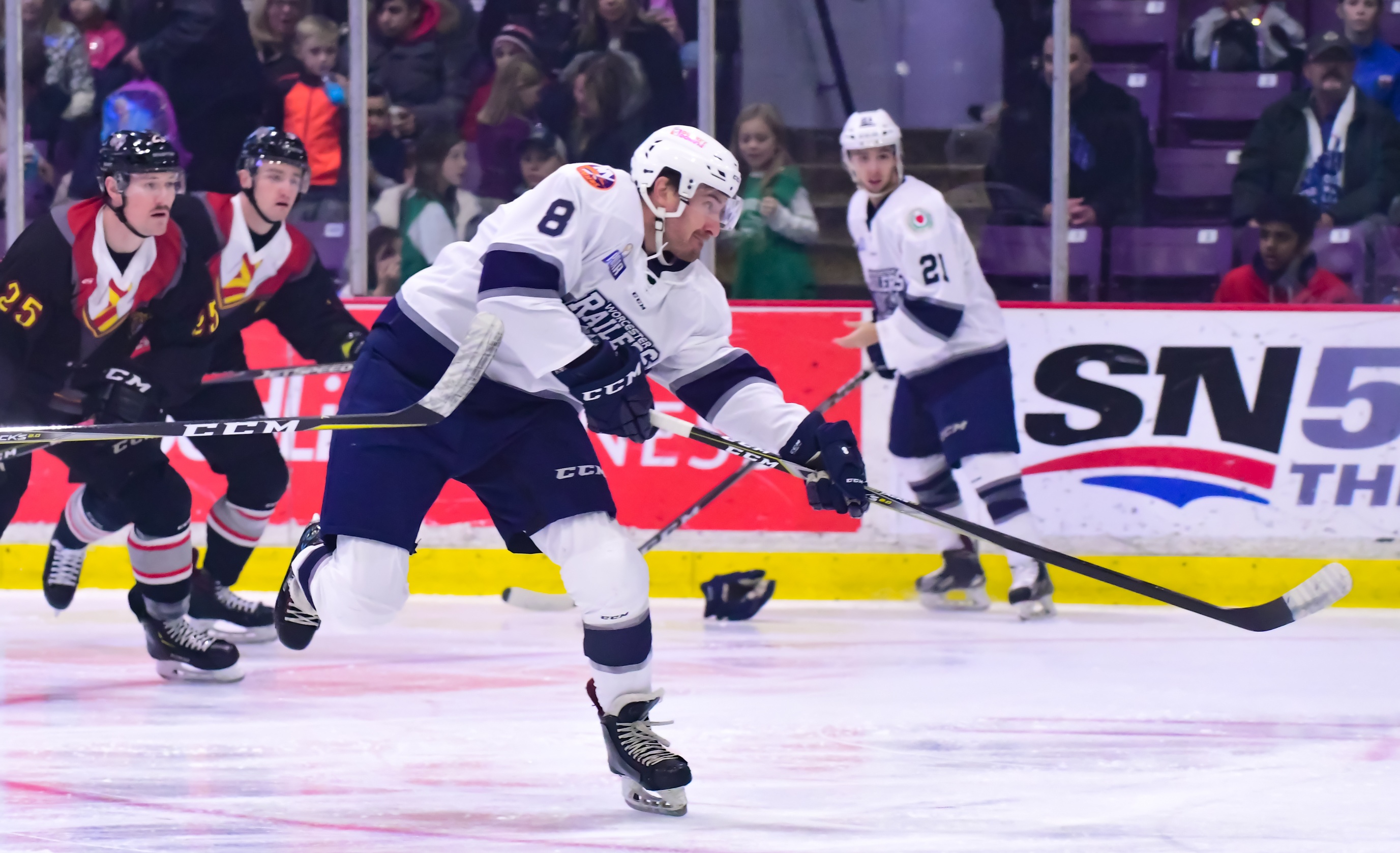 Meeting 1 of 8 vs. Brampton this season

Tyler Mueller scored his first professional goal for Worcester with the extra attacker and Mitch Gillam was excellent making 28 saves in his first start since he was injured on Nov 7 in St. John’s. Davis Pacan (2-1-3) and Brandon Marino (0-3-3) each had three points for the Beast while Etienne Marcoux made 24 saves in net for the home win

It was a high tempo first period as the Beast held a 11-7 shot advantage through 20 minutes of play.  Each team hit the iron and Mike Cornell dropped the mitts vs. Boston Leier late in the period as the physical play picked up as the period concluded in a scoreless tie.

Worcester came out buzzing in the middle frame as the Railers outshot the Beast 12-10 in a scoreless second period.  Mitch Gillam has 21 saves through 40 minutes for the Railers while Etienne Marcoux had 19 stops for the Beast as the two teams headed into the second intermission in a scoreless tie.

David Pacan (1st) finished off a 2-on-1 from on top of the Railers crease at 3:05 followed by Boston Leier’s (1st) strike at 8:43 to give the Beast a 2-0 lead in the third period. Rooke defenseman Tyler Mueller (1st) scored his first professional goal with a wicked shot from the left point while Worcester had an extra attacker at 18:59 to get the Railers within a goal.  But the excitement was short lived, as David Pacan (12th) fired into the empty net at 19:20 to give the Beast a 3-1 home victory.

Notes: Three Stars: 3rd star: Boston Leier (Goal, Fight) 2nd star: Etienne Marcoux (24 saves, Win) 1st star: David Pacan (2-1-3) …. final shots were 31-25 in favor of Brampton… Etienne Marcoux (5-4-1-0) made 24 saves on 25 shots for Brampton…. Mitch Gillam (2-6-0-0) made 28 saves on 30 shots for Worcester in his first start since getting injured Nov 7 in St. John’s…. while Evan Buitenhuis served as the backup…. Worcester went 0-for-4 on the power play while Brampton went 0-for-1…. Tommy Kelley (inj), Yanick Turcotte (inj), Alex Vanier, and Malcolm Gould (inj) did not dress for Worcester….Connor Doherty played the forward position for the Railers…. Jeff Kubiak and Ryan Hitchcock are currently on recall with the Bridgeport Sound Tigers while Ivan Kosorenkov is on recall with the SJ Barracuda… the Railers are now 0-2-1-0 all-time in Brampton…the Beast wore Harry Potter themed jerseys during the game…. Worcester falls to 2-7-0-0 on the road this season…Mike Cornell and Barry Almeida added assists for Worcester.

The Railers play the Beast again on Tuesday at 11am in Brampton, Ontario.  Worcester returns home on Sunday, Dec 2 on a KIDS GIVEAWAY SUNDAY with a 3pm faceoff vs. the Mariners!  The first 1,000 kids 12-and-under will receive a mini football courtesy of myOfficeCloud. Score a SUNDAY FUNDAYticket pack which includes four tickets and four beers or four tickets with four sodas and popcorns starting at just $60.

Railers play well but come up empty on Black Friday