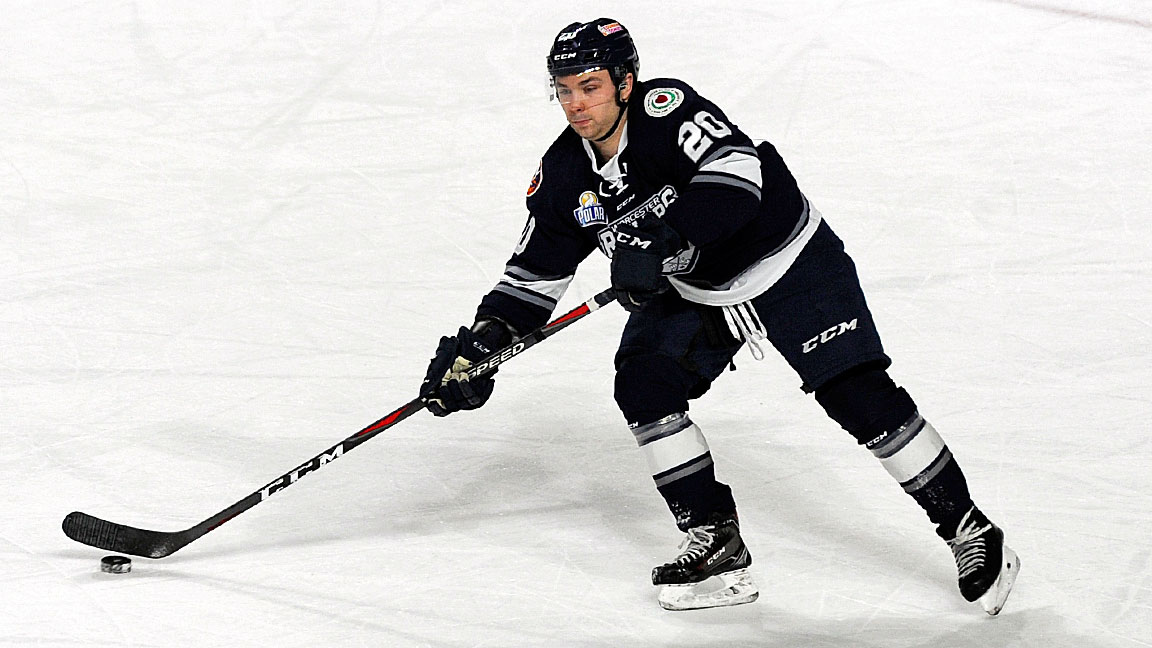 Meeting 11 of 12 vs. Manchester this season

Manchester, NH – The Worcester Railers HC(30-25-6-4, 70pts)dropped a 4-1 decision to the host Manchester Monarchs (34-27-2-2,72pts) in front of 4,102 fans at the SNHU Arenaon Saturday evening. With the loss,the Railers are now two points behindManchester for the fourth and final playoff spot in the North Division with seven games remaining. Worcester will now bus for 6.5 hours for a crucial 4pm faceoff on Sunday in Reading, PA vs. the Royals.

Drew Callin scored hist first professional goal for Worcester while Mitch Gillam made 18 saves in net as the Railers scored just a single goal in their second straight game. Daniil Miromanov scored twice for Manchester while Charles Williams made 22 saves in net as Worcester fell to 14-15-1-3 on the road this season.

Monarchs rookie Nic Pierog (32nd) sniped the only goal of the first period after the Monarchs won the puck along the wall and zipped the puck to the top of the crease at 10:39.  It took over 12 minutes for Worcester to get their first shot on goal on netminder Charles Williams but would end up having an 8-7 shot advantage through 20 minutes of play.

Manchester went ahead 2-0 as Daniil Miromanov (11th) tapped home a centering feed from on top of the crease at 16:17 of the second period.  Bentley University Alum Drew Callin (1st) would fire home a rebound attempt from the right circle for his first pro goal in first professional game to get the Railers on the board at 18:40.  Shots were 17-14 in favor of Worcester through 40 minutes of play.

Daniil Miromanov (12th) added an insurance goal at 15:11 of the third period as his centering feed went off a Worcester stick and into the net.  Pierre-Luc Mercier (12th) added an empty netter as Manchester grabbed the 4-1 home victory to hold onto the fourth and final playoff spot in the North Division. Shots were 8-6 in favor of the Monarchs in the third period.

Notes: Three Stars: 3rd star: Drew Callin (1-0-1) 2nd star: Nic Pierog (1-1-2) 1st star: Daniil Miromanov (2-0-2) …. final shots were 23-22 in favor of Worcester…Charles Williams (21-12-3) made 22 saves on 23 shots for Manchester… Mitch Gillam (19-14-5) made18 saves on 21 shots for Worcester….Blake Wajtala was the backup…. Worcester went 0-for-5 on the power play while Manchester went 0-for-3…. Kyle McKenzie (inj), Tommy Panico (inj), Alex Vanier (inj), Evan Buitenhuis (inj), Ross Olsson, and Tommy Kelley did not dress for Worcester….Mike Cornell (BRI) and Nick Sorkin (BNG) are currently in the AHL….forward Drew Callin (Bentley) was signed to a contract on Thursday and made his professional debut….. the Railers are now 14-15-1-3 on the road this season…Ryan Hitchcock has 35 points (15-20-35) in his last 28 games…. the Railers have 7 games remaining (4 home, 3 road)… Worcester now has 48 fighting majors this season – they had 45 last season….Connor Doherty and Bo Brauer all picked up assists for Worcester…. Bo Brauer had four shots on goal… Worcester has not allowed a power play goal in nine straight games (18-18)….Yanick Turcotte leads the entire ECHL with 17 fighting major penalties (9 home, 8 away)…Worcester will host Manchester on Apr 3 for the final meeting of the season between the two clubs….the Railers fall to 8-6-0-0 all-tie in Manchester.

On Sunday, the Railers head to Reading, PA to take on the Royals at 4pm.  Coverage starts 25 minutes before puck drop on 98.9 Nash Icon.

Individual tickets to a Railers game start as low as $15 by calling 508-365-1750or visit RailersHC.com.  Save $$$ with a RAILERS 6 PACK which includes six flex tickets and a Railers winter hat starting at $99.

The Railers Tavern located behind the DCU Center provides hockey fans with a great pregame and postgame atmosphere all season long. Watch all road games broadcast live at Railers Tavern or watch on ECHLTV.com for a small fee. Listen to all Railers games live on 98.9 Nash ICONwith coverage beginning 30 minutes before puck drop with Eric Lindquist and Tom Matthews. Full season memberships, mini plans, and group tickets are on sale now by calling the Railers front office at 508-365-1750 or by visiting www.RailersHC.com.

Railers grab a point but really wanted two in 2-1 overtime loss to Mariners...

Railers come up empty in Reading
Scroll to top