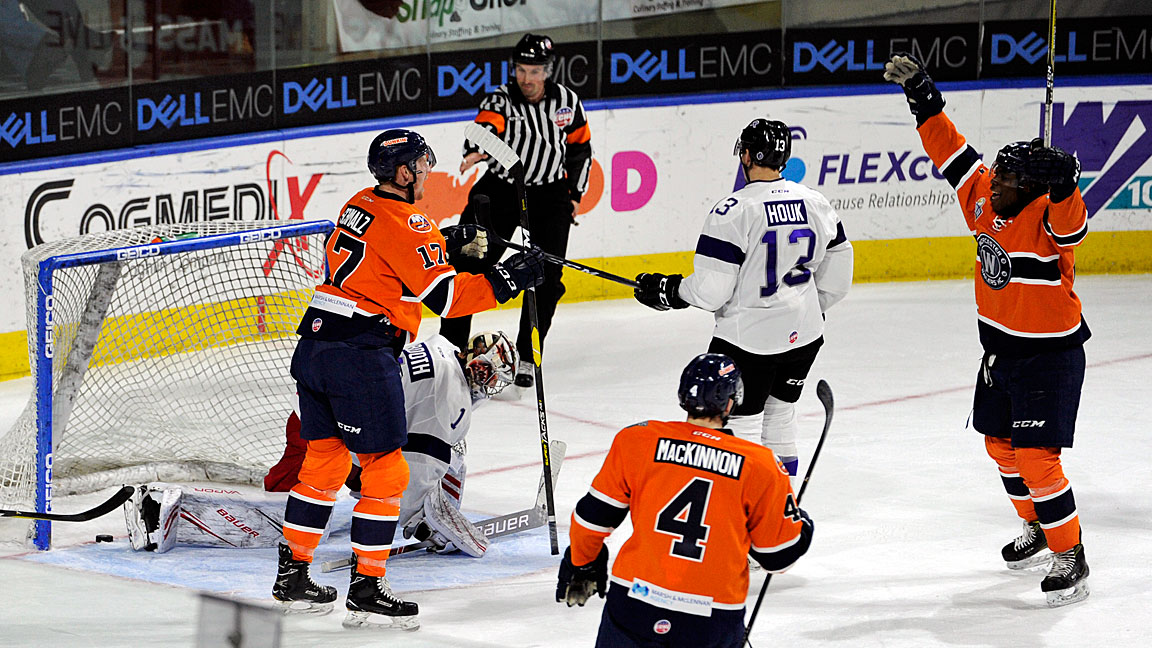 Meeting 4 of 6 vs. Reading this season

Josh Holmstrom nets game winner at 18:44 of the third period

WORCESTER, MA – The Worcester Railers HC(13-13-3-1, 30pts) closed out their pre-holiday schedule with third period comeback 5-3 win over the visiting Reading Royals (14-8-2-4, 34pts) in front of 4,491 fans at the DCU Center on Saturday evening. After a four-day holiday break, the Railers hit the road on Friday for a 7:15pm battle in Portland vs. the Maine Mariners.

Tyler Barnes scored twice, Matt Schmalz, Nick Sorkin, and Josh Holmstrom also scored for Worcester while Mitch Gillam made 36 saves in net in the win.  Worcester trailed 3-2 late in the third period before scoring three goals in the final 4:03 to break the Royals seven game winning streak.  Josh MacDonald scored twice for Reading while Callum Booth made 23 saves in net in the loss.

Tyler Barnes (9th) gave Worcester an early 1-0 lead after his one timer from 10 feet out beat netminder Callum Booth after a great cross ice feed by Ryan MacKinnon at 1:29.  It looked like the Railers were going to head into the first intermission with the lead, but, Josh MacDonald (14th) extended his point streak to four games with an easy tap in after a cross the top of the crease feed by Joe Houk with just 11 seconds left in the period.  Shots were 11-7 in favor of the Royals through 20 minutes of play.

Reading grabbed their first lead of the night in the second period as Josh MacDonald (15th) snapped a quick shot through a screen from 40 feet at 8:11 to put the Royals ahead 2-1.  Worcester would tie the score at 2-2 on a 4-on-4 opportunity as Nick Sorkin (6th) snapped a shot top shelf from 45 feet assisted by Matty Gaudreau and Mike Cornell at 13:45. Each team went 0-3 on the power play in the middle frame as Reading held a 12-10 shot advantage in the second period.

The Royals grabbed a 3-2 lead at 11:18 of the third period as Jack Riley (5th) crashed the net and scored a rebound strike past Mitch Gillam.  After Mitch Gillam made a stop on Frankie DiChiara, Worcester came down the other end of the ice and Matt Schmalz (4th) shuffled in a rebound at the side of the net assisted by Ivan Kosorenkov and Woody Hudson at 15:57.  When it looked like we may be going to overtime, Josh Holmstrom (8th) deflected a Tyler Mueller point shot into the net at 18:44 to give Worcester the 4-3 advantage.  Tyler Barnes (10th) put the game away with an empty netter at 19:04 to give Worcester the 5-3 home victory.

Notes: Three Stars: 3rd star: Josh MacDonald (2-0-2) 2nd star: Tyler Barnes (2-0-2) 1st star: Josh Holmstrom (GWG) …. final shots were 39-28 in favor of Reading…. Callum Booth (4-1-0) made 23 saves on 28 shots for Reading…. Mitch Gillam (8-8-0) made 36 saves on 39 shots for Worcester…. while Ryan Hubbard served as the emergency backup…. Worcester went 0-for-3 on the power play while Reading went 0-for-3…. Evan Buitenhuis (personal), Yanick Turcotte (inj), Kyle McKenzie (inj), David Quenneville (inj), Alex Vanier (inj), Dylan Willick, and Malcolm Gould (inj) did not dress for Worcester…. Jeff Kubiak and Ryan Hitchcock are currently on recall with the Bridgeport Sound Tigers… Nick Sorkin now has nine points (6-3-9) in his last eight games with the goal…..Ryan MacKinnon now has a three game point streak (1-3-4) with two more assists…the Railers are now 6-1-1-0 vs. the Royals all-time at the DCU Center….Tyler Barnes now has a three game point streak (3-1-4)…Aaron Witt made his play-by-play debut for the Railers during the second period….Mike Cornell Ivan Kosorenkov, Matty Gaudreau, Woody Hudson, and Tyler Mueller all added assists for the Railers….the five goals scored by Worcester tied a season high…. Worcester scored three goals in 3:07 late in the third period…Tyler Barnes and Nick Sorkin each finished a +3….before the game the Railers HC Foundation donated $40,000 to local charities.

On Friday, Dec 28 the Railers return from their holiday break with a 7:15pm start in Portland vs. the Maine Mariners.  Coverage begins at 6:50pm on 98.9 Nash ICON.

On Saturday, Dec 29 the Railers host the Maine Mariners at 7pm on HOME FOR THE HOLIDAYS NIGHT ON A BIG GAME SATURDAY.  The first 2,000 fans will receive a Railers HC texting glove courtesy of UniBank. Every Saturday night home game is SATURDAY NIGHT SIGNINGSpresented by MidState Auto Group with a Railers player signing autographs during the first intermission.

Worcester Railers Home for the Holidays!