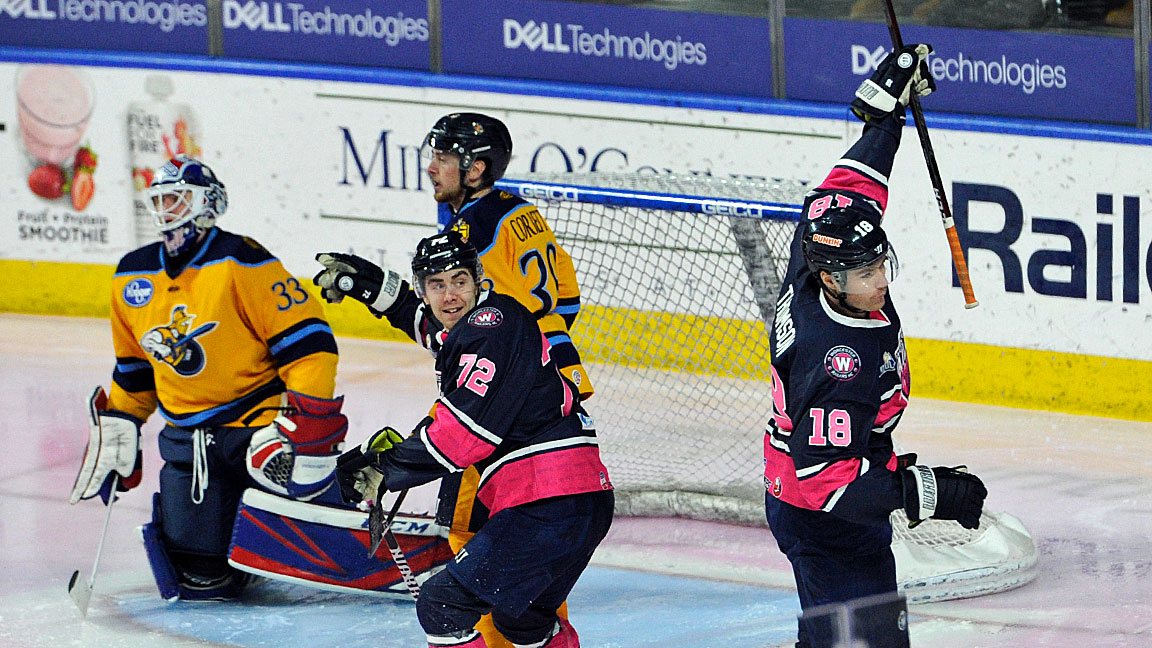 Meeting 1 of 1 vs. Atlanta this season

Railers are 0-0-1-0 vs. the Gladiators this season

Worcester, MA – The Worcester Railers HC(17-29-3-0, 37pts)fell in heartbreaking fashion 5-4 in overtime to the Atlanta Gladiators (20-25-1-1, 42pts)in front of 5,600 fansat the DCU Center on Saturday night.The Railers close out the weekend tomorrow at 3pm hosting the Newfoundland Growlers on Trax’s birthday as well as a Kid’s Giveaway Sunday.

An exciting first period was sparked by the signing of the National Anthem courtesy of Ricky Duran as five goals were scored in the opening 20 minutes of play as Worcester trailed 3-2. Nic Pierog (1-1-2) was able to tie the game with just 13 seconds left in the game before Cody Corbett (1-1-2) gave Atlanta the 5-4 victory in overtime at 5:21. Ben Thomson (1-2-3) and Nic Pierog paced the way offensively for Worcester while Jakub Skarek made 35 saves in net. Zach Malatesta (2-0-2), Logan Nelson (1-1-2), and Cody Corbett (1-1-2) led the way for Atlanta while Chris Nell made 37 saves in net for the win.

The Railers grabbed a quick lead in period one when Arnaud Durandeau (5th) zipped one low blocker from the right circle by Chris Nell to give Worcester a 1-0 lead 84 seconds into the game. Zach Malatesta (6th) sent a back hand shot on net from the left circle and it snuck by Jakub Skarek to tie the game at 1-1 at 2:34. Atlanta went on a power-play minutes later and once again it would be Zach Malatesta (7th) from the top of the point sending a bomb past Skarek to hand the Gladiators a 2-1advantage at 5:04 of the first. Atlanta was able to increase their lead to 3-1. With just 2:22 left in the opening period Barry Almeida (13th) took the puck behind the net and from behind the goal line sent a shot of the paddle of Chris Nell into the back of the cage decreasing the deficit down to 3-2. Worcester trailed 3-2 through the first 20 minutes of play as shots were in favor of Worcester 17-13.

It took just 90 seconds for Worcester tie the game in the second period as Ben Thomson (4th) received a feed in the high slot from Dante Salituro and found the back of the net at 1:30 to tie the game at 3-3. Moments later Josh Thrower (2nd) pin balled one into the back of the net at 4:04 and gave Atlanta back the lead at 4-3. The second period began to tighten up as Atlanta outshot Worcester 15-6 in the stanza and led 4-3 through 40 minutes of play.

With an extra attacker out for Worcester Nic Pierog (19th) received a feed from Drew Callin and from the right circle Pierog wasted no time and sent it home to tie the game at 4-4 with 13 seconds left in regulation. The game was all tied at 4-4 with Worcester outshooting Atlanta 38-25.

After a controversial play where Ben Thomson was boarded up against the glass on his own blueline Atlanta went down the ice and converted on a three on one as Cody Corbett (3rd) from the high slot beat Jakub Skarek low blocker at 5:21 to hand Atlanta a 5-4 overtime victory.

Notes: Three Stars: 3rd star: Zach Malatesta (2-0-2) 2nd star: Nic Pierog (1-1-2, 10 shots) 1st star: Cody Corbett (1-1-2) final shots were 42-40 in favor of Worcester…. Chris Nell (9-11-2) made 38 saves on 42 shots for Atlanta…. Jakub Skarek (2-5-2) made 45 saves on 40 shots for Worcester while Evan Buitenhuis served as the backup….Worcester went 0-for-4 on the power play while Atlanta went 1-for-4…., JD Dudek (IR), Kyle Thomas (IR), Yanick Turcotte (IR), Tanner Pond (IR), Cody Payne (Sick), Dylan Sadowy (IR), Jack Macnee and Ian Milosz did not dress for Worcester…. Mike Cornell, David Quenneville, Linus Soderstrom, and are all with the Bridgeport Sound Tigers…. Dylan Sadowy was placed on the IR Friday…. Nic Pierog led all Worcester skaters with 10 shots…. Ricky Duran sang the National Anthem before the game and signed autographs as well as took pictures with fans throughout the game…. Worcester has now lost six games in a row…. The Railers are 0-for-23 on the power-play in their last seven outings…. Bo Brauer picked up his first fighting major of the season when he dropped the gloves in the third period…. the Railers are now 13-20-1-0 under GM/Coach Cunniff…. Worcester has 22 games left on the regular season….The Railers are now 0-0-1-0 all-time vs. the Gladiators and 0-0-1-0 at the DCU Center.