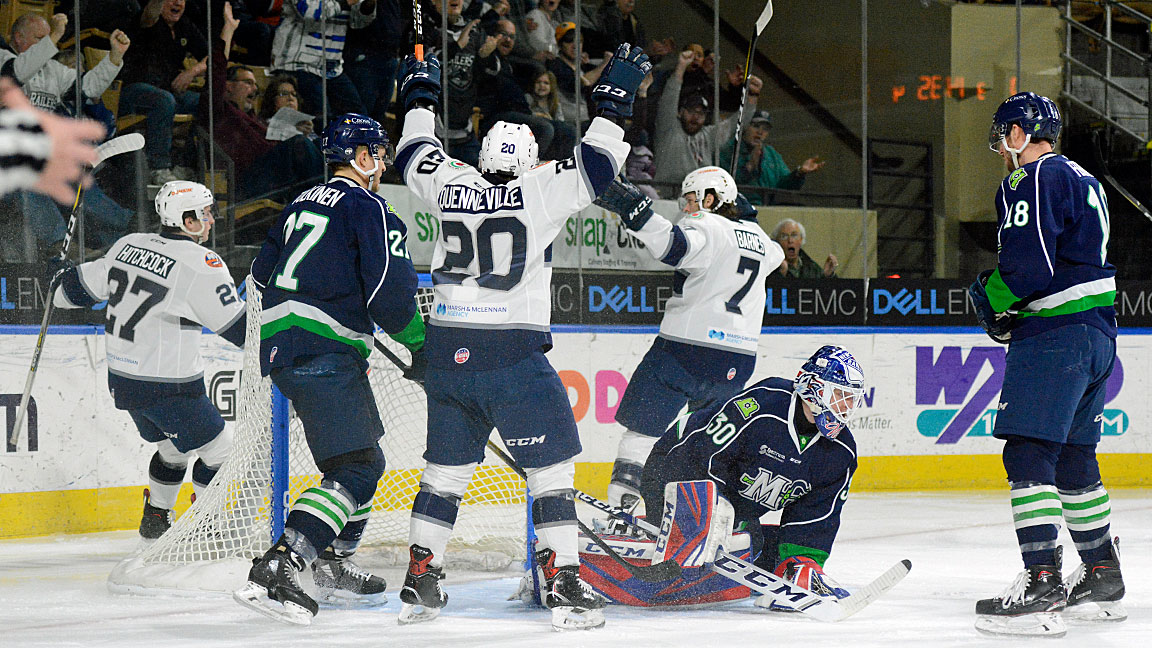 Worcester moves into a third-place tie after victory

Worcester, MA – The Worcester Railers HC (30-23-5-4, 69pts) picked up their seventh win in their last eight games with an exciting 5-3 win over the visiting Maine Mariners (33-26-2-1,69pts) in front of 5,353 fans at the DCU Center on Saturday evening. With the win, the Railers are now tied for third place in the North Division with the Mariners with 10 games remaining. The Railers are back in action on a KIDS GIVEAWAY SUNDAY with a 3pm start vs. the Manchester Monarchs at the DCU Center with the first 1,000 fans receiving a green Railers HC water bottle courtesy of the Worcester Bravehearts.

Tyler Barnes (2-2-4), Ryan Hitchcock (1-2-3), Dylan Willick, and Barry Almeida (1-1-2) all scored for Worcester while Mitch Gillam made 24 saves in net for his 19th win of the season. Dwyer Tschantz, Dillon Fox, and Michael McNicholas scored goals for the Mariners while Chris Nell made 38 saves in net as Worcester improved to 16-9-4-1 on home ice this season.  Worcester trailed 1-0, led 2-1, 3-2, and 4-3 before Almeida’s empty net goal late in the third period to seal the victory.

Each team found the back of the net in the opening frame as former Railer Dwyer Tschantz (9th) gave Maine a 1-0 lead at 3:44 but Tyler Barnes (25th) countered back and finished off a beautiful odd man rush assisted by Ryan Hitchcock and David Quenneville at 5:25 to tie the score.  Shots were 13-11 in favor of Worcester through 20 minutes of play.

A wild second period saw the two clubs score a total of five goals in the first 10:20 of the middle frame. Tyler Barnes (26th) deflected a David Quenneville blast from the point at 2:16 to give Worcester a 2-1 lead. But just 10 seconds later, Dillan Fox (10th) boke down the right side and snapped a quick shot from 30 feet to tie the score at 2-2.  The Railers went back ahead at 3:59 on the power play after a great effort and finish by Ryan Hitchcock (16th) to make it 3-2.  Maine countered again at 9:36 as Michael McNicholas (13th) tapped home an easy one after a nice feed by Tony Cammarata on the rush to tie the score 3-3.  Dylan Willick (8th) came rushing down the right side and zipped home the go-ahead goal past netminder Chris Nell at 10:20 to give Worcester the 4-3 advantage.  Things would simmer down the rest of the way as Worcester outshot Maine 19-9 in the middle frame and took a 4-3 lead into the third period of play.

Worcester would shore things up defensively in the third period as they outshot Maine 11-6 in the final frame.  Barry Almeida (21st) would fire into an empty net at 19:28 to seal the deal in a big 5-3 home victory.

Notes: Three Stars: 3rd star: David Quenneville (0-2-2) 2nd star: Ryan Hitchcock (1-2-3) 1st star: Tyler Barnes (2-2-4) …. final shots were 43-27 in favor of Worcester…Chris Nell (12-18-2) made 38 saves on 42 shots for Maine… Mitch Gillam (19-13-4) made 24 saves on 27 shots for Worcester for his 5thstraight win – Blake Wojtala served as the backup…. Worcester went 1-for-1 on the power play while Maine went 0-for-4…. Kyle McKenzie (inj), Tommy Panico (inj), Alex Vanier (inj), Evan Buitenhuis (inj), Ross Olsson, Charlie Michalowski, and Spencer Trapp did not dress for Worcester….Mike Cornell (BRI) and Nick Sorkin (BNG) are currently in the AHL…. the Railers are now 16-9-4-1 on home ice this season…Ryan Hitchcock has 34 points (15-19-34) in his last 25 games…. the Railers have 10 games remaining (6 home, 4 road)… Worcester now have 46 fighting majors this season – they had 45 last season…. Matt Schmalz, David Quenneville (2), Ryan Hitchcock (2), Tyler Barnes (2), Barry Almeida, and Rob Powers all picked up assists for Worcester….Barry Almeida and Josh Holmstrom each had a game high six shots on goal…Dylan Willick, Tyler Barnes, and Barry Almeida have all scored in back-to-back games for Worcester.

On Sunday, March 17 the Railers host the Manchester Monarchs at 3pm on a KIDS GIVEAWAY SUNDAY!  The first 1,000 kids 12-and-under will receive a co-branded green Worcester Railers / Worcester Bravehearts water bottle courtesy of the Worcester Bravehearts! Score a SUNDAY FUNDAY ticket pack every Sunday which includes 4 ticket and 4 beers or 4 tickets and 4 sodas/popcorns starting at just $60!

The Railers Tavernlocated behind the DCU Center provides hockey fans with a great pregame and postgame atmosphere all season long. Watch all road games broadcast live at Railers Tavern or watch on ECHLTV.com for a small fee. Listen to all Railers games live on 98.9 Nash ICON with coverage beginning 30 minutes before puck drop with Eric Lindquist and Tom Matthews. Full season memberships, mini plans, and group tickets are on sale now by calling the Railers front office at 508-365-1750 or by visiting www.RailersHC.com.