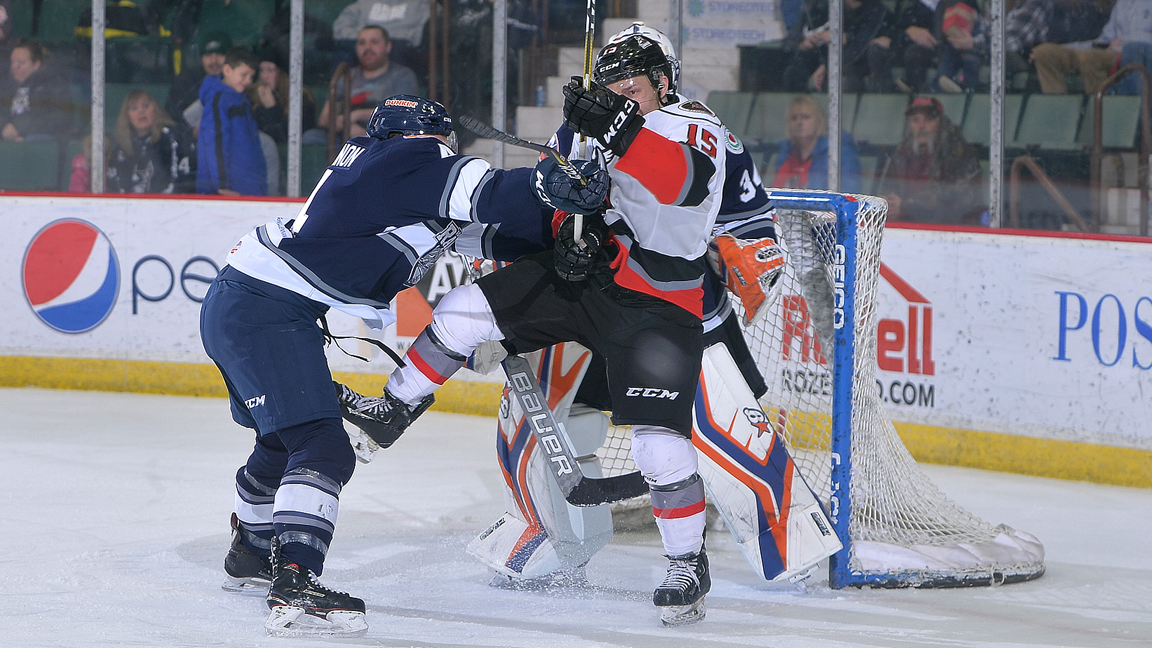 Worcester Railers HC at Adirondack Thunder
January 25, 2019
Cool Insuring Arena
Meeting 6 of 11 vs. Adirondack this season
Railers are 2-4-0-0 vs. the Thunder this season

GLENS FALLS, NY – The Worcester Railers HC (18-17-3-2, 41pts) kicked off the unofficial second half of the season with a gritty 4-2 win over the host Adirondack Thunder (22-14-3-2, 49pts) in front of 3,043 fans at the Cool Insuring Arena on Friday evening. The Railers host the Adirondack Thunder at 7pm on a BIG GAME SATURDAY on Social Media / Diocese of Worcester and Catholic Schools Night.

Tommy Panico, Josh Holmstrom, Ryan Hitchcock, and Barry Almeida all scored for Worcester while Evan Buitenhuis made 24 saves in net for the Railers in his 7th win of the season. Evan Cormier made 31 saves in net for Adirondack in his ECHL debut as the Railers won for the first time in Glens Falls in three tries this season. Ryan Hitchcock was +3 as he also added an assist as nine different players picked up assists as the Railers won for the 5th time in their last six games.

Worcester played a fine road first period of play grabbing a 1-0 lead through 20 minutes of play. Tommy Panico (2nd) scored on a rebound from the center slot past netminder Evan Cormier assisted by Tyler Barnes and Ryan Hitchcock at 10:28. Evan Buitenhuis was solid for Worcester as he made nine saves as Worcester held an 11-9 shot advantage through the first period.

The Railers grabbed a 2-0 lead after a nice score by Josh Holmstrom (9th) after Ivan Kosorenkov found Connor Doherty trailing the play and Doherty made a nice move around a defender and found Josh Holmstrom low in the left circle for a quick one timer at 5:43. Ryan Hitchcock (3rd) scored on his own rebound after a nice entry by Matt Schmalz and Tommy Kelly at 10:18 of the second period. Worcester had several chances to go ahead 4-0 but Evan Cormier kept the game within reach with some saves while Evan Buitenhuis had 19 saves through 40 minutes of play.

The Thunder made it interesting in the third period with a 5-on-3 score by Jake Linehart (4th) at 7:25 and a high stick score by Conor Riley (15th) at 11:19 to cut the Railers lead to 3-2. Things got rather nasty in the third period before Barry Almeida (11th) scored into the empty net with an unassisted score at 19:10 to give Worcester the 4-2 road victory.

Notes: Three Stars: 3rd star: Josh Holmstrom (1-0-1) 2nd star: Mike Szmatula (0-2-2) 1st star: Ryan Hitchcock (1-1-2, +3) …. final shots were 35-26 in favor of Worcester…. Evan Cormier (0-1-0) made 31 saves on 34 shots for Adirondack…. Evan Buitenhuis (7-7-3) made 24 saves on 26 shots for Worcester…. while Mitch Gillam served as the backup…. Worcester went 0-for-2 on the power play while Adirondack went 1-for-3…. Kyle McKenzie (inj), Woody Hudson, Alex Vanier (inj), Tyler Mueller (inj), and Malcolm Gould (inj) did not dress for Worcester…. Jeff Kubiak and Matty Gaudreau are currently on recall with the Bridgeport Sound Tigers…Josh Holmstrom returned to the lineup after he was loaned back from the Sound Tigers and added a goal…before the game the Railers traded forward Nick Roberto to Greenville for cash considerations….the Railers are now 10-6-2-0 all-time vs the Thunder…Worcester is now 0-19 on the powerplay vs. the Thunder but 18-19 on the penalty kill….the Railers are now 7-10-0-1 on the road this season….Matt Schmalz picked up a fighting major in the third period vs. Michael Sdao…..Barry Almeida’s empty netter was his 100th professional goal.

What’s on tap – Home and Home with Thunder!
On Saturday, Jan 26 the Railers host the Adirondack Thunder at 7pm on a BIG GAME SATURDAY on Social Media Night! Make sure you bring your phones and follow the Railers social media channels for a chance to win some cool prizes and interact throughout the entire game! In addition, it is Diocese of Worcester and Catholic Schools Night. Every Saturday night home game is SATURDAY NIGHT SIGNINGS presented by MidState Auto Group with a Railers player signing autographs during the first intermission.