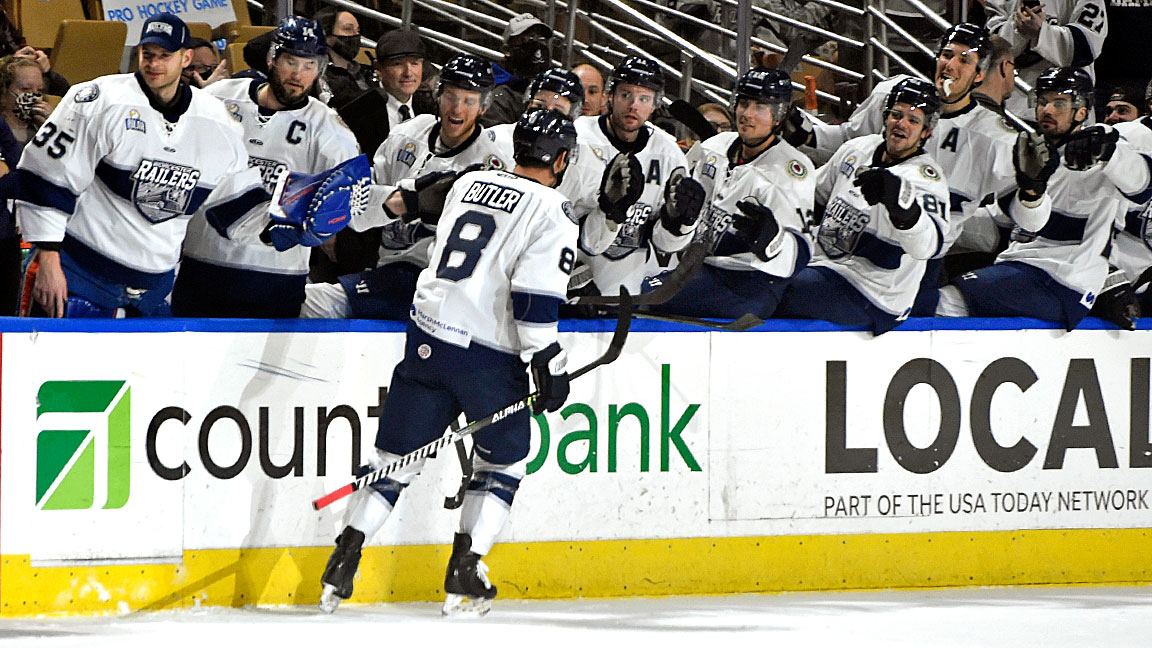 Meeting 10 of 10 vs. Trois-Rivières this season

Trois-Rivières, QC  – The Worcester Railers HC (32-32-4-2, 70pts) lost to the Trois-Rivières Lions (34-29-5-1, 74pts) on Saturday afternoon by the final score of 3-2 in front of a crowd of 4204 at Colisée Vidéotron. The Railers await their playoff fate depending on the outcome of Newfoundland & Maine’s game on Saturday night.

Trois-Rivières jumped out in front midway through the first, but Anthony Repaci (1-1-2) tied things up early in the second. The Lions once again found the back of the net, this time midway through the second, to take a 2-1 lead. With the goalie pulled and the season on the line late in the third, Bobby Butler (1-0-1) rifled the puck into the back of the net to send the game into OT, and preserve the Railers playoff aspirations. Trois-Rivières would score the OT winner, but the possibility remained for Worcester to make the playoffs, having come away with one point. Should the Newfoundland Growlers defeat the Maine Mariners in regulation in their matchup on Saturday night, the Worcester Railers will clinch the fourth and final playoff spot in the North Division.

Anthony Repaci (23rd) continued what has been a good stretch of play for the Toronto native by tying the game for the Railers at 1-1 just 3:06 into the second. Repaci gained the attacking blue line along the right side, unleashed a shot on Artuts Silovs in net for Trois-Rivières, then finished off his own rebound as he blew through the defense for the tally. The game would be tied for the next 8:30 before Trois-Rivières once again found the back of the net and got back out in front, 2-1. The Lions took advantage of a defensive breakdown for the Railers and swarmed the front of the net, as Justin Ducharme finally swatted it past Appleby for the marker. Shots in the period were even at 11, as Worcester continued to outshoot the Lions on the game, 29-26.

Former Olympian Bobby Butler (6th) was the hero for Worcester late in the third with Appleby pulled on the other end of the ice and the extra attacker on. He received a cross-ice pass from Anthony Repaci atop the left point, and one-timed a blast past Silovs to tie the game with 1:45 left on the clock, and eventually send it into overtime tied at 2-2. Shots in the third favored Trois-Rivières 13-6, as the Lions were now outshooting Worcester through 60 minutes at 39-35.

In overtime, despite a number of quality chances in the attacking end, it would be another defensive zone breakdown which would allow Anthony Nellis (22nd) to score his second of the night and lock up the win for the Lions, 3-2. Despite the loss, getting at least one point on the afternoon guaranteed Worcester the opportunity to make the playoffs, should the Newfoundland Growlers defeat the Maine Mariners in regulation in their matchup on Saturday night. Shots in overtime favored Worcester 3-1, as Trois-Rivières outshot the Railers on the day 40-38.

Railers Struggle to Score in 5-0 Defeat to Trois-Rivières