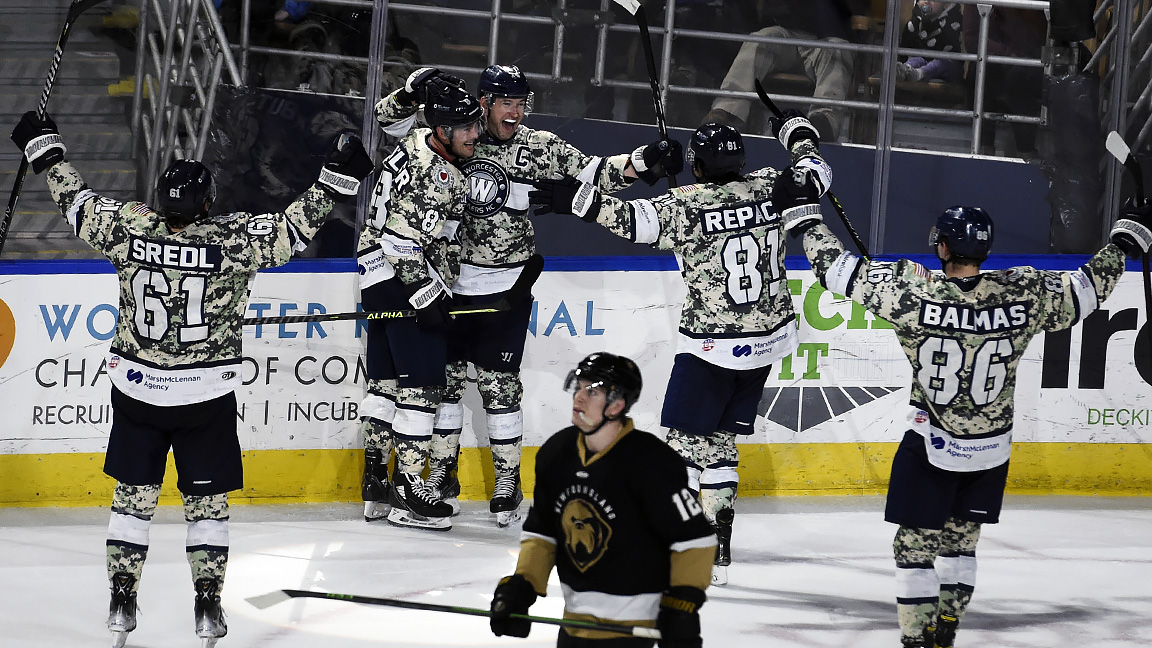 8,774 fans in attendance at the DCU Center Saturday Night For Military Appreciation Night

WORCESTER, MASS – Sports is mostly about numbers these days but there are still judgment calls to be made, so let’s throw this out there:

The Railers’ 4-3 victory over the Newfoundland Growlers Saturday night at the DCU Center was the most intense, compelling and dramatic game in franchise history. It was, perhaps, the best one ever at the DCU Center but that is truly a judgment call because, including playoff games, there have been almost 1,000 of them.

It was Military Appreciation Night and a crowd of 8,774 jammed into the building. It was the fourth-largest in Railers history and made them a perfect 5-0-0 playing before crowds of 8,000 or more.

Jordan Lavallee-Smotherman, age 35, recorded his second hat trick of the season and the first natural hat trick in Railers history. Bobby Butler, 34, assisted on one of those goals. Mitchell Balmas, who turned 24 on Saturday, scored the game-winning goal and had Worcester’s third Gordie Howe Hat Trick of the year.

The Railers captain, who has played on teams and in leagues at almost every level around the world, was asked if the game was as much fun to play as it was to watch.

“Absolutely,” he replied “We don’t get a crowd like that every night and especially playing against a great team. There are only a few games like that during the season, especially during the regular season.”

The Growlers were up, 2-0, after one period on goals by Isaac Johnson and Riley McCourt. Given that Newfoundland had won four in a row going into the game and was 8-2-0 in its last 10 games, that was not the position the Railers wanted to be in after 20 minutes.

Smotherman’s first goal of the second period, a deflection of a shot by Matt Sredl, turned the night in Worcester’s favor.

“That was the biggest thing,” coach David Cunniff said. “Every goal is big, right, but that’s what we talked about after the first period. I thought we had played a pretty good period and the game was not out of control. At the same time we knew we had a heavyweight in the other corner and to get knocked down twice in the first period, it wasn’t going to be easy to come back.”

At 2:03 Balmas took advantage of a turnover near the Growlers net — credit Ethan Price with strong forechecking — and was left alone in front of goalie Angus Redmond. Balmas, who assisted on Smotherman’s third goal and fought Jeremy McKenna near the end of the first period, made a couple of great moves and had a lot of net to hit from just outside the crease.

The rest of the third period was a remarkable blizzard of up-and-down rushes, great saves and hard hits. Referee J.R. Stragar, doing his first-ever game at the DCU Center, went with the philosophy of “if nobody loses consciousness it’s not a penalty” and the 8,000-plus in the seats were the winners.

“I had to ask for an extra rest shift,” Smotherman said, “because it just kept going and going. (Stragar) let the players decide the game. It was a great hockey team we played against and the game was something special.”

The big crowd and the adrenaline of honoring the military was a big boost for the home team.

“How can you not compete with that in mind?” Cunniff said, “then getting down by two and showing that character, that’s what our country’s all about.”

Balmas was 1-1-2 on the way to his Gordie Howe hat trick and Anthony Repaci continued his strong play with a pair of assists. Ken Appleby stopped 26 of 29 shots to post his third straight win.

“I know people get tired of hearing this,” Cunniff said, “but we’ve got the best goaltending tandem in the league.”

The victory was the fifth straight for the Railers, their longest winning streak since they also won five in a row from Feb. 27 to March 9, 2019. That was a nice streak, too, but none of those victories compared with this one and not many will, no matter how long the streak.

MAKING TRACKS_Felix Bibeau, hurt late Friday, did not dress but is not on the injured list. Liam Coughlin and Grant Jozefek remain on injured reserve. Nolan Vesey and Blake Christensen were rested. … Following up on Colten Ellis’ shutout Friday night — it was his 14th win of the season, moving him into third place on the team’s all-time list in that category. Mitch Gillam and Evan Buitenhuis are ahead of him. It was also Ellis’ first No. 1 star of the season after eight times getting the second star. … The Railers completed the third quarter of the season Friday night and were 10-4-4 in those 18 games. That compares with 4-13-1 in 2019-20. Worcester’s best-ever quarter is the fourth quarter of the 2017-18 season when it was 13-4-1 to surge into the playoffs. … ECHL commissioner Ryan Crellin was in attendance.… The Booster Club took in a record $1,800 for its 50-50 raffle. … The game featured three plays that went under video review and Worcester was 0 for 3. However, all three supported the original calls. … The teams play again Sunday afternoon, finishing the Railers’ 3 in 3 weekend. Worcester is 19-9-3 in Game 2s like Saturday but just 9-14-3 in third games including 1-7-1 in the last nine.