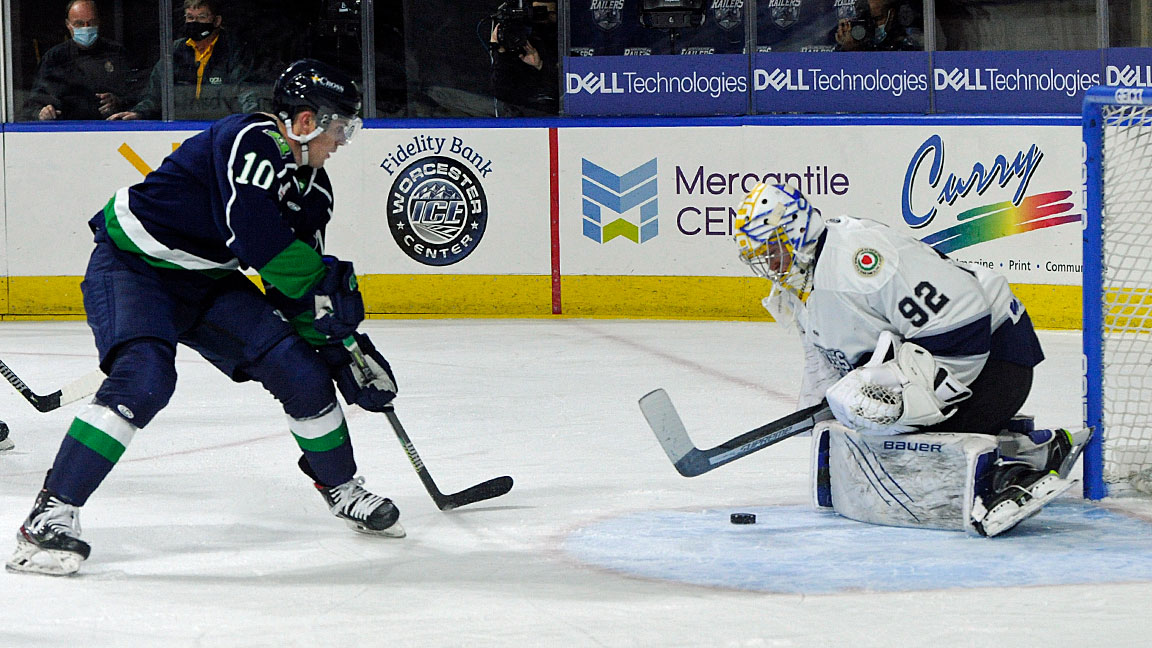 WORCESTER, Mass. – In hindsight, it is not clear if it was the penalty killing, the goaltending or David Cunniff’s hat that brought the Railers their first victory of the season Saturday night.

Nolan Vesey had two goals to place the Worcester attack. Felix Bibeau added another and Nic Pierog scored the game winner, a goal at 6:56 of the third period that came just seven seconds after the Railers killed a penalty and gave Worcester its first lead of the season.

Colten Ellis, in his professional goaltending debut, made 42 saves to preserve the win including some remarkable ones in the closing minutes when the Mariners pulled their goalie for a 6 on 4 advantage.

The best stop was on Lewis Zerter-Gossage with 1:04 to go in the third. The Mariners’ forward had the puck at the bottom of the right circle with time and room and Ellis somehow stopped the shot with his glove.

“I just tried to get over there as fast as I can and cover the net,” Ellis said, “and get my glove kind of out there and was fortunate to make the save.”

Pierog scored on a rebound to finish a 2 on 1, taking advantage of Jacob Hayhurst’s original shot on Maine goalie Zach Bouthillier.

“On a 2 on 1, you know there’s always gonna be a rebound,” Pierog said, “but it was an amazing shot by Hayhurst. We practice it all the time and he put it on a tee for me.”

The Railers, who were not good killing penalties Friday night in Maine, were 4 for 4 Saturday night and Cunniff credited assistant Jason Franzone for getting that unit back on track.

As far as anyone remembers, no Worcester pro coach had worn a hat of any kind during a game until Cunniff Saturday night. A native of South Boston, Cunniff sported a Boston Scally.

“I was just styling,” Cunniff said of his wardrobe choice. Asked about wearing it again in Glens Falls Wednesday night he replied, “We won, so I might as well. It covers my bald head.”

Matthew Santos, Pascal Laberge, and Nick Master had the Maine goals. Santos and Laberge scored in the first period, Master in the second. In between the first-period goals, Vesey tied it at 18:03 by beating Zach Bouthillier with a 15-footer from the left side.

Bibeau tied the game for Worcester 23 seconds into the second period as he kept the puck to finish a 2 on 1, using Blake Christensen as a decoy. Bibeau ripped a 25-footer home. The Mariners responded at 10:46, Master ramming in a second rebound after the Railers allowed him to break through the defense and approach Ellis undisturbed.

Vesey re-tied it at 14:59, deflecting a low 40-foot wrist shot by Malatesta, who was set up by Brent Beaudoin, and it was 3-3 going into the third.

MAKING TRACKS_Springfield recalled rookies Mathias Laferriere and Keean Washkurak and returned Christensen and Pierog, both of whom were in the lineup. Pierog made his 2021-22 Railers debut wearing the familiar Number 61. … Ellis’ Number 92 is the highest in franchise history, surpassing Ashton Rome’s 88 from the first season. … The Mariners were without Ed Tralmaks, who scored three goals on Friday night. He was immediately recalled by Maine’s AHL partner, the Providence Bruins. …  Worcester travels to Glens Falls on Wednesday to play Adirondack, where the Railers have a better winning percentage than at the DCU Center. They are 13-6-1 in 20 games out there. Worcester’s next home game is Nov. 6 versus Florida. It will be IceCats night. …Original Railer Connor Doherty, now with Maine, was recognized on the video board during the first period. … Worcester is 4-0-0 in home openers. … Beaudoin was 0-1-1 and plus 3. Counting his one game two seasons ago he is 1-2-3 and plus-5 in two games.

Joey Chestnut Eats Twelve Pies in Ninety Seconds In Front Of Over 10,000 Fans...
Scroll to top