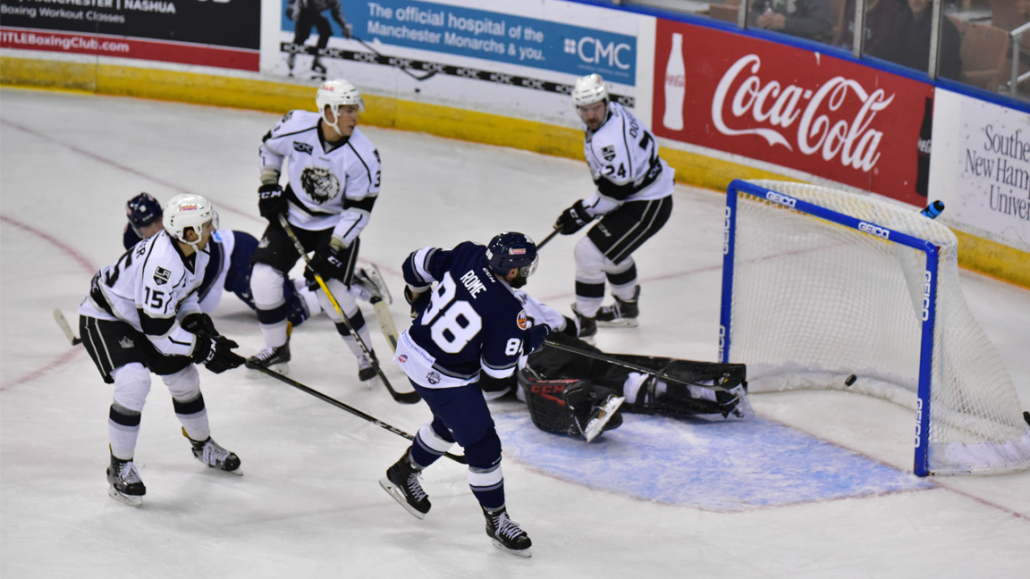 Meeting 5 of 15 vs. Manchester this season

Ashton Rome and Matty Gaudreau scored for the Railers while Eamon McAdam was spectacular in net with 29 saves.  Worcester fired a season high 20 shots on goal in the second period and won for the first time this season when allowing the first goal of the hockey game.

Matt Leitner (1st) gave Manchester an early 1-0 lead after the Monarchs crashed the net on a rush and Leitner found a loose puck at the side of the crease just 45 seconds into the game.  Worcester outshot Manchester 12-9 in the opening period but goaltender Charles Williams stood tall in net.

Worcester fired 20 shots on goal in the second period and finally broke through with a couple of goals.  Captain Ashton Rome (4th) fired home a rebound into an empty net after an initial shot by Kellen Jones was denied at 13:54 to tie the score at 1-1.  Rookie Matty Gaudreau (3rd) scored a beauty of a shorthanded goal with a rush down the right-wing side and fired home his own rebound at 18:82 to give the Railers a 2-1 advantage.  Eamon McAdam made 11 more saves in the second frame as the Railers took a one goal advantage into the second intermission.

Eamon McAdam made 10 more saves in the third period as the Railers held off a late Monarchs rush to hold onto the impressive 2-1 road victory.

Notes: Three Stars: 3rd star: Matt Leitner (1-0-1) 2nd star: Ashton Rome (1-0-1, 8 shots) 1st star: Matty Gaudreau (GWG, 6 shots) …Final shots were 37-30 in favor of Worcester… Charles Williams (5-2-1) made 35 saves on 37 shots for Manchester…. Eamon McAdam (3-3-1) made 29 saves on 30 shots for Worcester…. Mitch Gillam was the backup goalie….Worcester went 0-for-5 on the power play while Manchester went 0-for-4…. Nick Saracino, Matt Lane, Yanick Turcotte, and Connor Doherty (inj) did not dress for Worcester…the shorthanded goal by Gaudreau was the 2nd scored by Worcester this season….Worcester won for the first time this season when allowing the 1st goal.

On Sunday, the Railers host the Manchester Monarchs on Kids Giveaway Sunday at 3:05pm.  The first 1,000 kids will receive a Railers HC silicon bracelet.  Every Sunday game fans may purchase a Family Fun Pack which includes four tickets, four hot dogs, and four sodas for $80.