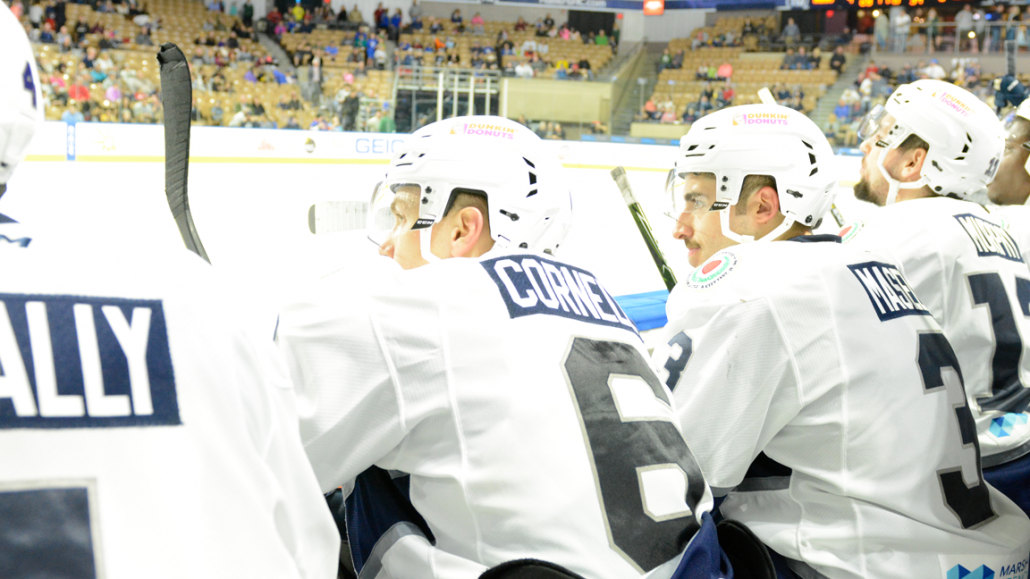 Meeting 1 of 14 vs. Reading this season

Worcester, MA – The Worcester Railers HC (4-2-1-0, 9pts) handed the Reading Royals (4-1-0-0, 8pts) their first loss of the season after a 4-2 victory in game two of a five game homestand in front 3,411 fans at the DCU Center on Friday evening. The Railers host the Royals again on Saturday at 7:05pm on Slap Shot Night.

Patrick McNally (1-1-2) continued his torrid scoring touch with a pair of points while Woody Hudson, Frankie DiChiara, and Matty Gaudreau also scored for Worcester.  Eamon McAdam made 33 saves in net for his second win of the season in the Railers home ice victory.

Woody Hudson (2nd) gave the Railers a 1-0 lead with his second goal in as many games after Yanick Turcotte threw a shoulder in the corner and won the puck in front to Hudson who then buried a quick shot through the pads of goaltender Mark Dekanich at 17:01.  Reading would tie the score on the power play with 31 seconds left as Ryan Penny (4th) pin-balled a shot off skates and past Eamon McAdam to tie the score at 1-1.  Shots were 15-8 in favor of Reading through 20 minutes.

The Railers had a terrific second period as Patrick McNally (5th) fired home a rebound after an initial shot from Matt Lane at 5:08 and Frankie DiChiara (2nd) finished an awesome pass from Jeff Kubiak on an odd man rush at 7:05.  Worcester led 3-1 after 40 minutes of play despite Reading leading 20-19 in shots.

Matty Gaudreau (1st) scored his first professional goal with a great rush down the leftwing side and a quick shot on the rush at 4:08 to give the Railers some insurance.  Reading would strike again on the power play at 7:52 at Mark Naclerio (2nd) to cut the lead to 4-2.  The Royals would pressure late and Eamon McAdam went for an empty net goal as time expired and just missed as Worcester held on for the 4-2 home victory.

Notes: Three Stars: 3rd star: Eamon McAdam (33 saves, Win) 2nd star: Patrick McNally (1-1-2, +4) 1st star: Matty Gaudreau (1-1-2, 1st professional goal) …Final shots were 35-28 in favor of Reading… Mark Dekanich (2-1-0) made 24 saves on 28 shots for Reading….Eamon McAdam (2-0-1) made 33 saves on 35 shots for Worcester…. Mitch Gillam served as the backup goalie for the Railers….Worcester went 0-for-2 on the power play while Reading went 2-for-4….TJ Syner, Barry Almeida, Ryan Lannon, Chris Saracino, Josh Monk (inj), Jeff Kubiak (ill) and Connor Doherty (inj) did not dress for Worcester… before the game, defenseman Chris Saracino was signed by the Railers – Chris is the older brother of Nick Saracino…Nick Saracino made his Railers debut after missing the first six games due to injury…. Yanick Turcotte picked up his second assist of the season….Patrick McNally finished +4 and now leads the ECHL with a +11 rating….. Woody Hudson finished +3 and has goals in back to back games.

Coming up….
On Saturday, November 4, the Railers host the Reading Royals at 7:05pm on Slap Shot Night!  The Railers will be wearing a special Slap Shot themed jersey and Dr. Hook will drop the ceremonial first puck and sign autographs to help celebrate the 30th anniversary of the iconic hockey movie. The game worn jerseys will be auctioned off during the game with a select few auctioned off during a live post game auction. Saturday night will also be American Diabetes Awareness Night with proceeds from chuck-a-puck and a portion of the Slap Shot Jersey Auction benefiting the American Diabetes Association.

On Sunday, November 5, the Railers host the Reading Royals at 3:05pm in the first Kids Giveaway Sunday.  The first 1,000 kids 12-and-under will receive a Worcester Railers school folder.  Score a Family Fun Pack at every Sunday game which includes four tickets, four hot dogs, and four sodas for just $80.   In addition, all season ticket holders are invited to skate with the team for a postgame skate (all season ticket holders must bring their own skates and fill out waiver at fan assistance table).