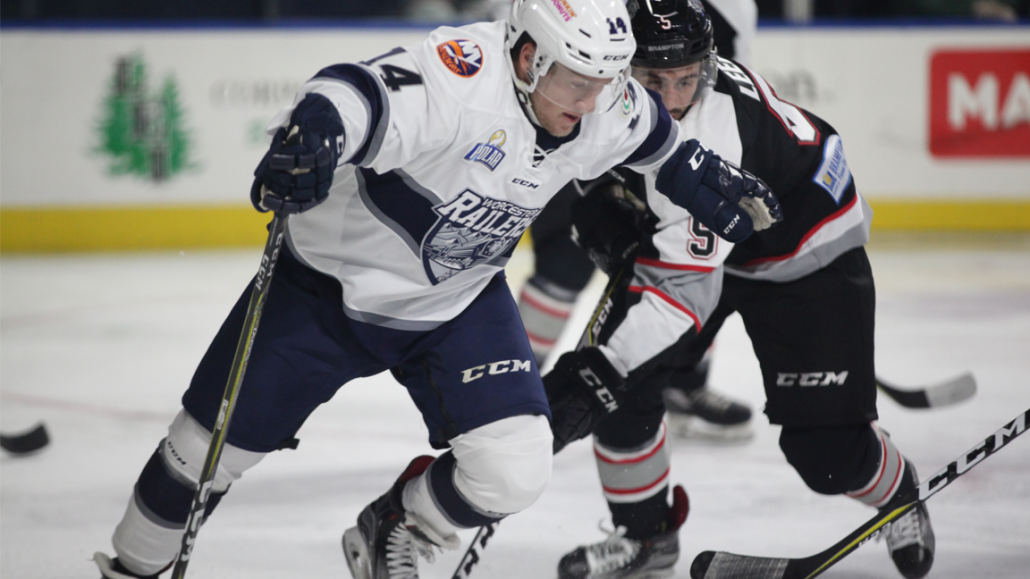 Meeting 1 of 7 vs. Brampton this season

Railers HC get schooled on home ice in front of 6,088 at DCU Center

Worcester, MA – The Worcester Railers HC (5-6-1-0, 11pts) hosted the first ever School Day Game in Worcester pro hockey history with a 10:05am start but gave up a goal late in the third period and dropped a 4-3 decision to the visiting Brampton Beast (5-7-1-1, 12pts) in front 6,088 fans at the DCU Center on Tuesday morning.

Mike Cornell, TJ Syner, and Jeff Kubiak all scored their first goals of the season for Worcester while Eamon McAdam made 28 saves in net for the Railers.  Worcester trailed 3-1 early in the third period before tying the score, but, Matt Petgrave (5th) finished off a 2-on-1 power play rush at 17:22 for the game winner for the Beast who won their third straight game.

Worcester struck first in the first period as defenseman Mike Cornell (1st) fired a wicked wrister from the center point on the power play at 4:25 to give the Railers a 1-0 edge.  Brampton would answer back just over five minutes later as Kevin Dufour (5th) fired a quick shot through a screen at 9:58. Shots were 9-6 Brampton through 20 minutes of play with the score tied 1-1.

The Railers hit the post three times in the second period behind goaltender Andrew D’Agostini but were unable to find the back of the net.  Brampton would take a 2-1 lead after Reggie Traccitto (3rd) scored on a shorthanded breakaway at 7:42 past netminder Eamon McAdam.  Shots were 15-12 in the middle frame as the Railers headed into the second intermission down 2-1.

Brandon Marino (6th) put the Beast ahead 3-1 after he was able to find the puck alone in front of the Worcester crease and took several whacks at it before putting the puck home at 5:31 of the third. TJ Syner (1st) got Worcester within one at 7:26 before rookie Jeff Kubiak (1st) scored his first professional goal at 13:14 to tie the score at 3-3.  But a late power play goal on a 2-on-1 rush with 2:38 left in the third period spelled doom for the Railers as Matt Petgrave (5th) netted the game winner as Worcester dropped their fourth straight game.

On Friday, the Railers head to Manchester for a 7pm start vs. the Monarchs at the SNHU Arena.

On Sunday, the Railers host the Manchester Monarchs on Kids Giveaway Sunday at 3:05pm.  The first 1,000 kids will receive a Railers HC silicon bracelet.  Every Sunday game fans may purchase a Family Fun Pack which includes four tickets, four hot dogs, and four sodas for $80.