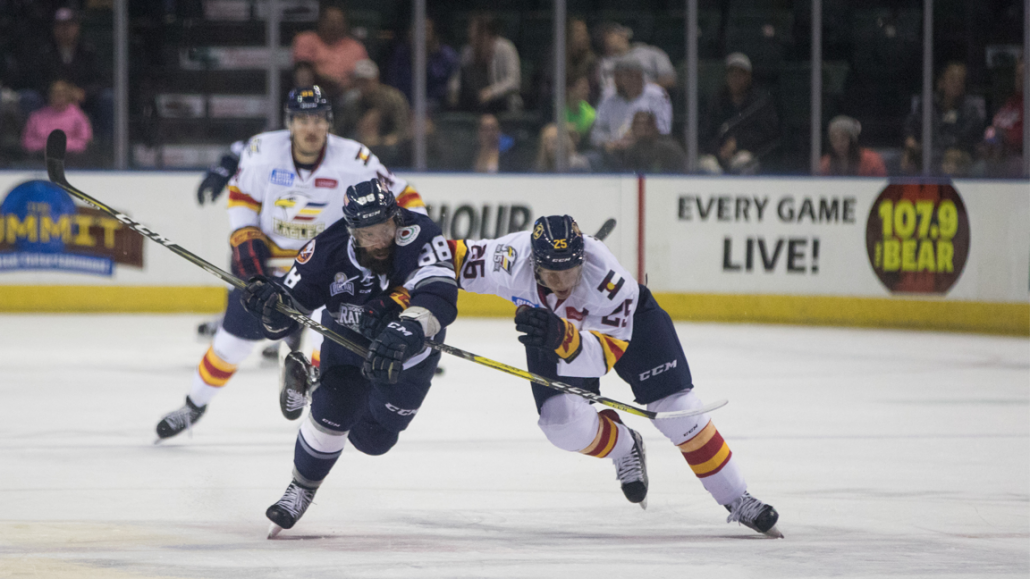 Meeting 1 of 1 vs. Colorado this season

Railers HC fall but brawl in wild game in Colorado

Loveland, CO – The Worcester Railers HC (2-1-0-0, 4pts) dropped their first game in franchise history after a 5-1 loss to the Colorado Eagles (5-0-0-0, 10pts) in front 4,421 fans at the Budweiser Events Center on Wednesday evening in a game that featured 182 penalty minutes and a wild third period brawl.

The first period featured several fights and a total of 13 penalties dished out but the Railers trailed 2-0 through 20 minutes. Joey Ratelle (1st) buried a cross ice feed top shelf past goaltender Mitch Gillam at 12:59 while the Eagles were shorthanded for his first professional goal.  Just 62 seconds later, Jake Marto (2nd) buried a pass from behind the net to give Colorado a 2-0 lead.  Yanick Turcotte (4th FM) and Mike Cornell (1st FM) each picked up fighting majors in a feisty frame.

Colorado grabbed a 3-0 lead at 2:15 of the second period as Drayson Bowman (2nd) sent a one timer past Gillam from 20 feet.  The Railers would pick up the pressure in the final 15 minutes of the period but were unable to find the back of the net past goalie Joe Cannata.  Shots were 22-21 in favor of Worcester through 40 minutes of play.

Patrick McNally (2nd) got the Railers on the board at 2:49 but the Eagles would strike right back at 5:24 from Brady Shaw (4th) and Michael Joly (4th) at 15:20.  A wild brawl in front of the Eagles bench at 17:41 lasted several minutes with a total of 124 penalty minutes and several game misconducts.  Mike Cornell, Jeff Kubiak, Yanick Turcotte, and Woody Hudson all picked up fighting majors and game misconducts in the fight as the Railers fell 5-1 in the game.

Coming up….
The Worcester Railers Hockey Club, a proud member of the ECHL, head to Utah on Friday, Oct 27 for a 9:05pm (EST) battle vs. the Utah Grizzlies.  Listen to the game live on 98.9 Nash ICON with coverage beginning at 8:35pm. Full season memberships, mini plans, and group tickets are on sale now by calling the Railers front office at 508-365-1750 or by visiting www.RailersHC.com.

Railers in the Air: Team heads to Colorado, UtahTrick or Treat with the Worcester Railers – presented by Mezcal!
Scroll to top