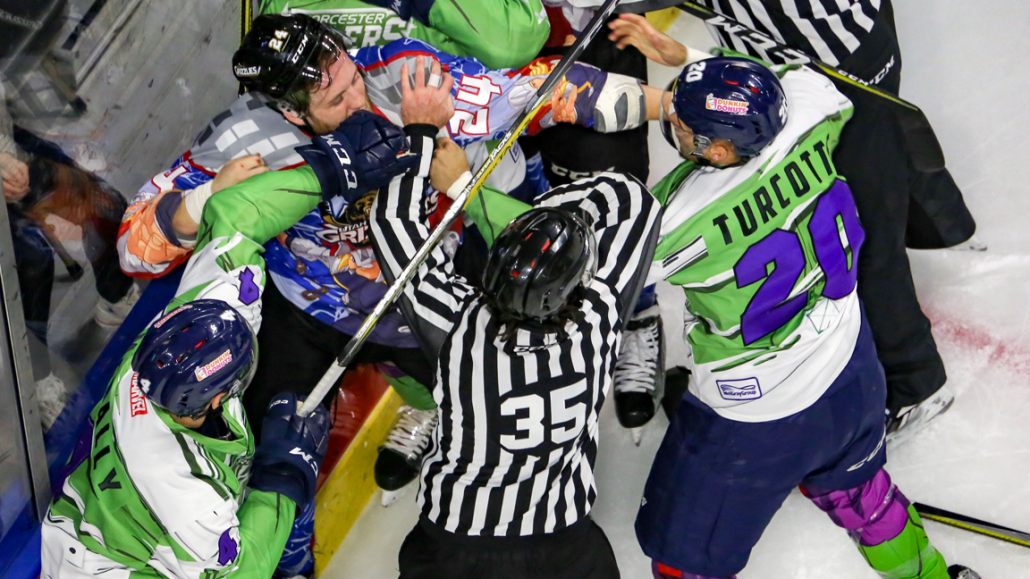 Meeting 2 of 3 vs. Utah this season

Worcester is 1-0-1-0 vs. the Grizzlies this season

Patrick McNally (1-1-2), Kellen Jones (0-2-2), and Chris Langkow (1-1-2) all had multipoint games for the Railers while Mitch Gillam was sharp in net with 27 saves for the win.  Ben Masella scored his first pro goal and Barry Almeida scored his first of the season while Yanick Turcotte picked up his ECHL leading 6th fighting major in the road victory.

The Railers came out flying in the first period and grabbed a 2-0 lead.  Chris Langkow (2nd) ripped a shot from the center slot after a nice feed from Kellen Jones to give Worcester an early lead.  After Travis Howe chased Yannick Turcotte (6th FM) around the ice and took a run at Patrick McNally, Turcotte dropped the mitts and sent Howe down to the ice in a one-sided scrap at 10:32.  Ben Masella (1st) scored his 1st professional goal with a laser from the point after Ashton Rome won an offensive zone faceoff at 16:34.  Shots were 11-7 Worcester through 20 minutes of play.

Worcester outshot Utah 11-9 in a scoreless second period as Mitch Gillam continued his strong play in the Railers cage.  The Railers headed into the second intermission with a 2-0 advantage through 40 minutes of play.

Patrick McNally (4th) extended his point streak to five games to give the Railers a 3-0 lead at 3:24 of the third period.  The Grizzlies got on the board after Zach Saar (1st) scored his first professional goal after a nice rush up and finish past Mitch Gillam at 10:12. Barry Almeida (1st) added an empty netter to seal the victory for the Railers to close out the road trip on a high note.

Coming up….
The Worcester Railers Hockey Club, a proud member of the ECHL, return home on Halloween Night for a 7:05pm faceoff vs. the Toledo Walleye. Doors will open at 6pm at the DCU Center as fans of all ages are encouraged to wear costumes to celebrate Halloween presented by Mezcal.  Everyone in costume may join an on-ice costume parade during the first intermission with prizes for the best costumes. In addition, the first 1,000 fans will receive a Worcester Railers HC magnet schedule presented by Davis Advertising and BayState Savings Bank. The Railers Tavern, located behind the DCU Center is now open and will provide hockey fans with a great pregame and postgame atmosphere all season long. Listen to the game live on 98.9 Nash ICON with coverage beginning at 8:35pm. Full season memberships, mini plans, and group tickets are on sale now by calling the Railers front office at 508-365-1750 or by visiting www.RailersHC.com.