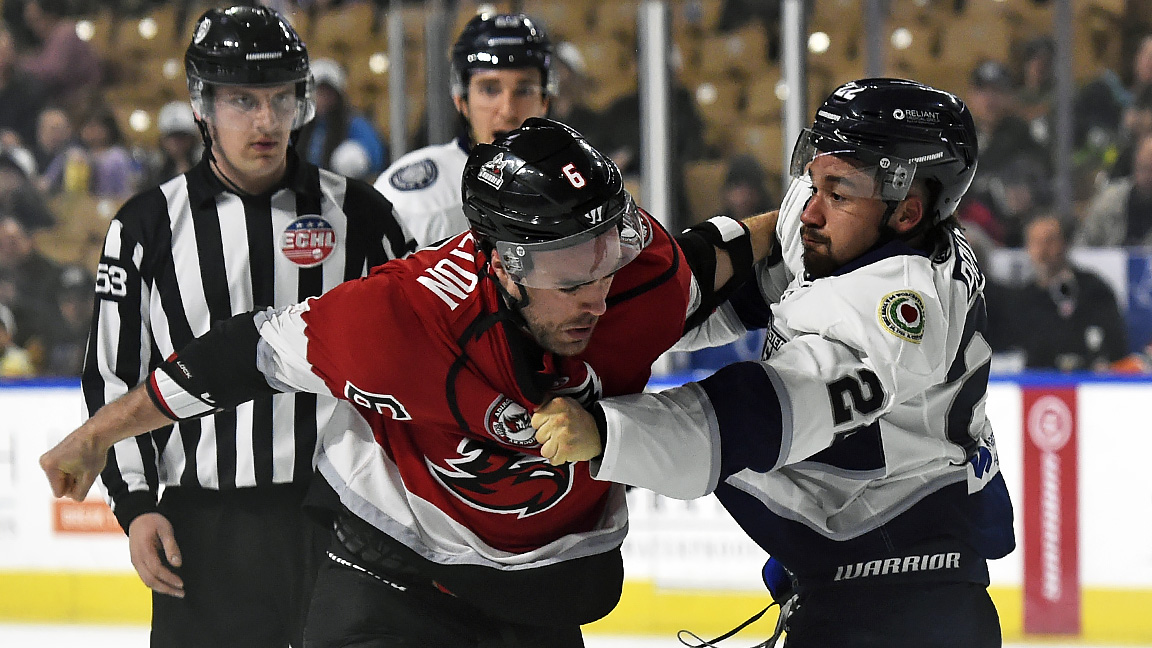 WORCESTER, MASS – Worcester won another game that went down to the final seconds, this one a 5-4 victory over the Adirondack Thunder. The triumph moved the Railers into a dead heat for the fourth and final playoff spot in the North Division with Maine.

Worcester had a 3-1 lead in the second period and allowed the Thunder to come back to tie it. The Railers had a 5-3 lead halfway through the third and Adirondack cut it to 5-4, then went on the power play with 2:23 to go.

Worcester survived it and came away with the two points.

“The way Ken (Appleby) was playing in net I felt like he was gonna make the last save,” coach David Cunniff said. “Give Adirondack credit. They battle and they have some good offensive players and they make you work for it, but I felt confident because we had Ken on our side.”

Jordan Lavallee-Smotherman had yet another two-goal game to lead the way offensively. The captain has 25 for the season and is just the second Railer to reach that mark. Tyler Barnes had 28 in 2018-19.

Blake Christensen and Ross Olsson were both 1-1-2, Liam Coughlin had a pair of assists and Cole Coskey had three assists.

“That kid was a force tonight,” Cunniff said of Coskey. “He’s been playing strong, he’s been playing heavy but tonight, with the speed he was playing with and with his north-south game, I thought he was a man among boys.”

Nolan Vesey had the other Railers goal.

Ryan Smith had two goals for Adirondack, Luke Stevens had one and Justin Kaplan was 1-2-3.

Coughlin’s two assists helped but his biggest contribution was probably on faceoffs, especially in the final two minutes when the Thunder pulled goalie Marek Mitens and had two extra skaters.

“He was big winning faceoffs,” Cunniff said of his center. “With their power play, if they get the puck it doesn’t leave the zone until the whistle blows and they’re pulling it out of the net.”

The teams traded power play goals in the first period, which ended 1-1 and featured something familiar — a goal by Lavallee-Smotherman — and something that has become uncommon, a fighting major.

Smotherman made it 1-0 at 1:55 as he took a pass from Coughlin and fired a high 40-footer past Mitens. Kaplan tied it at 12:37, slipping one past Appleby from in close after Appleby had made several excellent saves.

Rookie Ethan Price snapped Worcester’s streak of 17 games without a fighting major when he battled Jake Hamilton at 7:45. Price had actually been involved with Kaplan but Hamilton came off the bench to intercede and wound up with the matching major.

It was an active period for Price who barely missed scoring his first pro goal at 15:50 when his deflection to finish an odd-man rush went off the right post and stayed out.

Vesey scored just 19 seconds into the second period, popping in a pass from Bobby Butler that hit Mitens’ stick and bounced out front. Olsson got his 10th power play goal of the season at 5:50 and the Railers maintained that two-goal lead until the fateful end of the period.

Stevens scored at 18:14 on a play that looked offside then Smith converted on the power play at 19:25.

Smotherman put Worcester back ahead at 8:03 of the third period, Christensen scored from in close at 9:11 and Smith got his second of the night at 11:50.

The last eight minutes were wild and woolie and the Railers wound up with two critical points.

Before the game, the Railers roster went back to a state of flux, although it is not Covid-related.

Defenseman Will Cullen is gone, recalled by Bridgeport then released. He has signed with Idaho. Appleby is back from Bridgeport and started Friday night, so Jimmy Poreda was released. Mike Cornell was recalled to Bridgeport and Worcester signed rookie defenseman Artur Terchiyev out of Wisconsin-Superior.

Terchiyev is a native of Kiev, Ukraine and is merely the fourth Ukrainian to play for a Worcester team through the years. The previous three were all IceCats — Alex Vasilevskii, Maxim Linnik and Sergei Varlamov. Terchiyev has Number 44, same as Varlamov.

He is in town but did not play Friday night.

MAKING TRACKS_ The Railers are 5-2-1 in Butler’s eight games. … Worcester has won five straight over the Thunder. … Their next game is Wednesday night at Trois-Rivieres, a team Worcester has a chance to catch in the North Division playoff race. The next game at the DCU Center is Friday, March 18 versus South Carolina. … Cornell has not been with the Railers much this season but has set a franchise record by scoring at least one goal in six different calendar years. That list includes 2017, 18, 19, 20, 21 and 22. Terry Virtue holds the city record, of course, scoring in eight different calendar years with the IceCats. … Chris Oorodbadi has joined Connor McCarthy and Grant Jozefek on the injured list. … Attendance was 2,815. … Olsson has eight goals in eight games versus Adirondack.