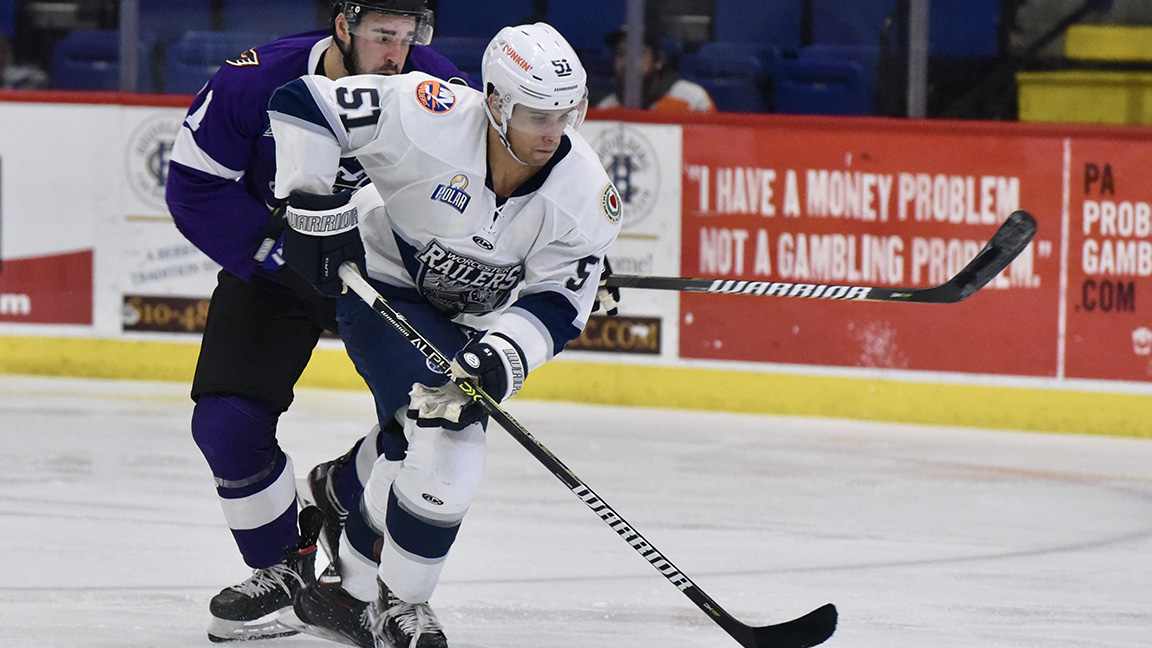 Worcester Railers HC at Reading Royals
January 3, 2020
Santander Arena
Meeting 3 of 13 vs. Reading this season
Railers are 2-1-0-0 vs. the Royals this season

Ben Thomson (1-1-2) scored just 32 seconds into his first ECHL shift while Ivan Chukarov (1-0-1) scored his first goal of the season and Ryan MacKinnon (1-1-2) scored a short-handed five on three goal. Evan Buitenhuis made 30 saves in net for his seventh win of the season. Trevor Gooch (5th) scored the lone goal for Reading while Felix Sandstrom made 15 saves in net.

It took just 32 seconds for Ben Thomson (1st) to find the back of the net in his first ECHL shift when he tracked a puck nicely and slammed it past Felix Sandstrom to give Worcester a 1-0 lead. After a feed from the right circle from Yanick Turcotte, Ivan Chukarov (1st) drove the puck home from the top of the left circle with a hard wrist shot over the blocker of Sandstrom at 3:12 to increase the Railers lead to 2-0. Evan Buitenhuis stopped all seven shots he faced while Worcester led 2-0 through 20 minutes of play and outshot Reading 9-7.

The second frame saw no scoring as Evan Buitenhuis made six saves and Felix Sandstrom made five saves. Each team had one power-play but could not convert as Worcester had a 2-0 lead through 40 minutes of play.

Yanick Turcotte received five minutes for charging and a ten-minute misconduct at 4:23 of the third period and then Dante Salituro went to the box for high sticking at 5:32 giving the Royals a five on three power-play. Despite being down two men, it was the Railers who would answer when Nic Pierog flipped a puck to Ryan MacKinnon (2nd) who raced in and fired one bar down over the glove of Sandstrom increasing the Railers lead to 3-0. Reading finally broke through when Trevor Gooch (5th) was able to sneak home a rebound at 10:56. Drew Callin (6th) tacked on the insurance goal with an empty net tally at 19:46 to hand Worcester a 4-1 win.

Notes: Three Stars: 3rd star: Trevor Gooch (1-0-1) 2nd star: Ryan MacKinnon (1-1-2) 1st star: Evan Buitenhuis (30 saves, Win) …. final shots were 31-19 in favor of Reading…Felix Sandstrom (6-8-0) made 15 saves on 18 shots Reading… Evan Buitenhuis (7-10-1) made 30 saves on 31 shots for Worcester while Ian Milosz served as the backup…. Worcester went 0-for-1 on the power play while Reading went 0-for-4…. Kyle McKenzie (inj,), Jordan Samuels-Thomas (inj), JD Dudek (IR), Tanner Pond (IR), Bo Brauer, and Cody Payne did not dress for Worcester…. David Quenneville, Linus Soderstrom, and Jakub Skarek are all currently on recall with the Bridgeport Sound Tigers…. Yanick Turcotte extended his point streak to three games with an assist and added 15 penalty minutes in which he is now second in the league with 103…. Drew Callin has now scored in three straight games…. Ryan MacKinnon has now scored a five on three power-play and short-handed goal….. 19 shots on net for Worcester was a season low…. Connor Doherty is the only Railers player to play in the first 32 games this season….. Railers now lead the ECHL with eight short-handed goals…. Mike Cornell (0-1-1) played in his first game for Worcester since December 4th and added an assist…. Kyle Thomas played in his first game for Worcester since December 21st…. Jack Stander played in his 100thpro game….the Railers are now 7-10-0-0 under Coach Cunniff…. Eric Cairns, Director of Player Development for the New York Islanders, joined Coach Cunniff behind the bench…. It was just the third loss on home ice for Reading this season in regulation…. Worcester is now 13-9-1-0 vs. the Royals all time and 5-7-0-0 at the Santander Arena.

After two games in Reading vs. the Royals to kick off 2020, Worcester returns home on Sunday, Jan 5 as the Railers host the Jacksonville IceMen at 3pm on a KIDS GIVEAWAY SUNDAY with the first 1,000 kids 12-and-under receiving Railers mini sticks presented by AvZ Promotions. Score a SUNDAY FUNDAY ticket pack which includes four tickets and four beverage vouchers (beer/soda) for just $60!

The Worcester Railers host a promotion-packed 3-in-3 weekend at the DCU Cen...
Scroll to top