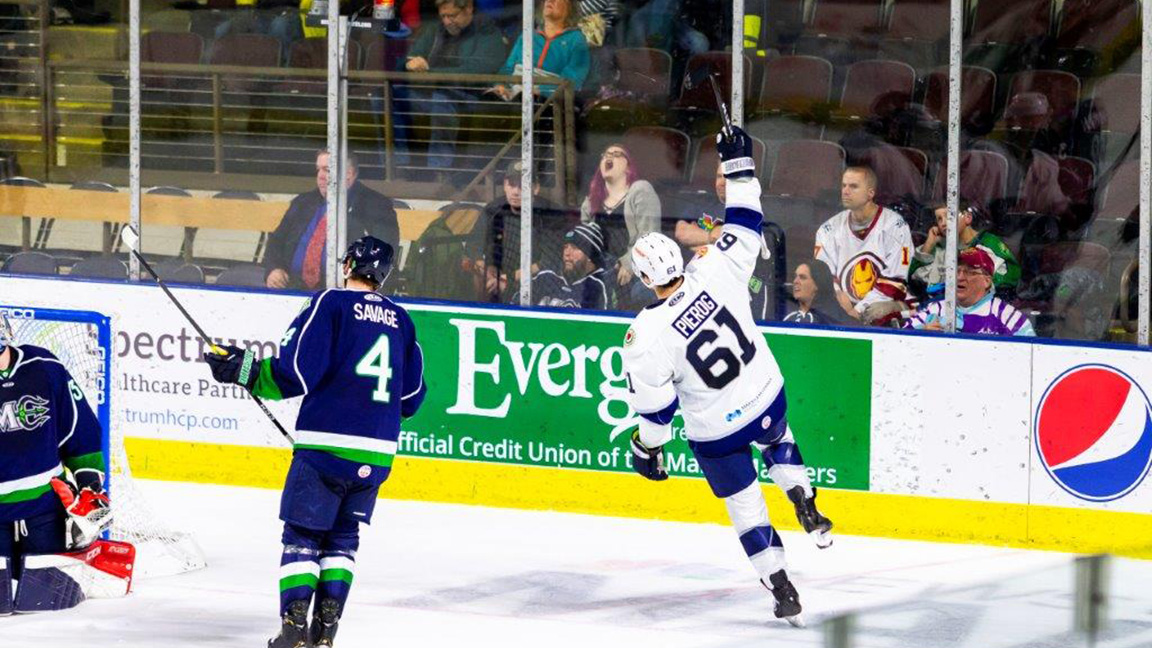 Meeting 2 of 18 vs. Maine this season

Railers Grab a Point in 5-4 Overtime Loss in Maine

Matt Schmalz (1-2-3), Kyle Thomas (1-1-2), Cody Payne, and Nic Pierog all scored goals while Jakub Skarek made 30 saves in net as the Railers trailed 1-0, 2-1, 3-2 but relinquished a 4-3 lead late in the third period before dropping the game in overtime. Alex Kile scored the game winner in overtime as Ryan Gropp scored twice while Tom McCollum made 30 saves in net as Maine improved to 6-3-0 on home ice this season.

The Worcester Railers tied their season high with 16 shots in the first period but it was Maine who got on the board first as Morgan Adams Moisan (2nd) tipped a puck in front past Jakub Skarek at 2:26. Connor Doherty would send a puck on net from the left point and on the door step to bang it home was Kyle Thomas (4th) at 5:38 tying the game at 1-1. Just 14 seconds Maine came down on a two on one which was finished off by Marc-Olivier Crevier-Morin (1st) on the far post. A two on one for the Railers would tie the game at 2-2 when Matt Schmalz (4th) sent one of a Mariners defender stick in the back of the net past Tom McCollum. Shots were in favor of Maine 17-16 through 20 minutes of play with the game dead locked at 2-2.

Maine started the scoring in the second period just 49 seconds in with his first of the season Ryan Gropp (1s) was able to send one over the glove of Jakub Skarek making the Mariners lead 3-2. The middle stanza was not as action filled as the first but within the final two minutes Worcester would grab their firs lead of the night. Cody Payne (5th) tied the game at 3-3 at 18:19 and then with just 57 seconds left Nic Pierog snapped one over the glove of Tom McCollum to give the Railers a 4-3 lead. Worcester took the lead into the locker room and an edge in shots 24-21.

The only goal of the final period would come from the home team when Ryan Gropp (2nd) threw one on net from the right circle which was deflected of a Railers stick and into the back of the net at 13:59 to tie it things up at 4-4.

The teams headed into overtime and with just 3:07 left Alex Kile (3rd) followed up his own rebound from below the right circle and sent one past Jakub Skarek to give the home team a 5-4 overtime win.

On Wednesday, Nov 27 the Railers host the Newfoundland Growlers at 7pm on a 2-3-4 Weekday.  Score $2 popcorn, $3 soda, and $4 Bud Light in the Bud Light Lounge! Show your Price Chopper Market 32 Advantedge Card at the Box Office for a $5 discount on all tickets purchased.