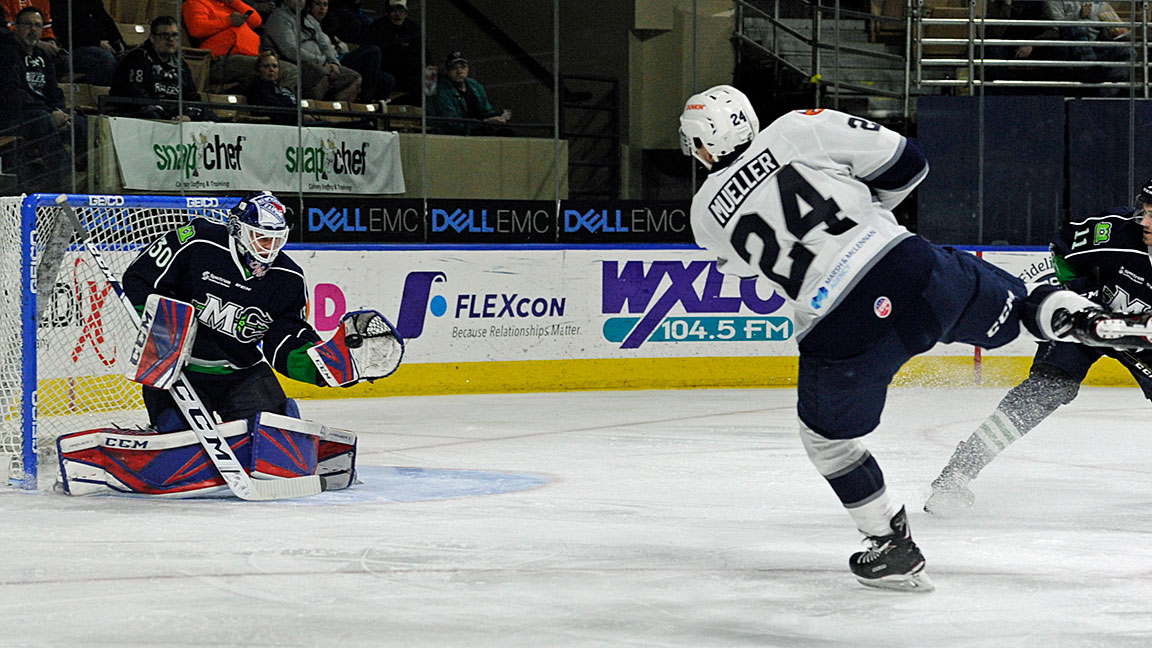 Worcester, MA – The Worcester Railers HC (30-24-6-4, 70pts) dropped a 2-1 overtime decision to the visiting Maine Mariners (35-26-2-1, 73pts) in front of 4,568 fans at the DCU Center on Friday evening. With the overtime loss, the Railers are now in a tie for fourth place with Manchester in the North Division with eight games remaining. The Railers are back in action on Saturday with a crucial 6pm faceoff in Manchester, NH vs. the Monarchs.

Tyler Mueller scored for Worcester while Mitch Gillam made 28 saves in net while Yanick Turcotte picked up a pair of fighting major penalties. Greg Chase scored both goals for Maine while Chris Nell made 30 saves in net as Worcester fell to 16-10-5-1 on home ice this season.  Maine jumped three points ahead of Worcester in the standings with the win.

The first period saw a terrific pace with both teams having a number of good scoring chances, but Mitch Gillam stood tall with nine saves through 20 minutes. Defenseman Tyler Mueller (2nd) went coast to coast and took a 2-on-1 rush on his own with a shot top shelf from the left circle to give  the Railers a 1-0 lead at 3:43.  Shots were 12-9 in favor of Worcester heading into the first intermission.

Yanick Turcotte (16th and 17th FM) stole the show in the second period as he pounded Ryan Ferrill and Derek Pratt in two separate one-sided altercations in a chippy middle frame.  Worcester held an 18-17 shot advantage and took a 1-0 lead into the second intermission.

Maine would even the score at 8:08 of the third period as Greg Chase (21st) redirected a shot from the left circle to tie the game at 1-1.  Barry Almeida hit the post with just under two minutes left before the game headed to overtime. Worcester led in shots 29-27 through 60 minutes.

Worcester has a couple of chances early in the extra session before Greg Chase (22nd) batted a centering feed into the net at 3:00 to give Mainer the 2-1 overtime victory.

Notes: Three Stars: 3rd star: Tyler Mueller (1-0-1) 2nd star: Chris Nell (30 saves, Win) 1st star: Greg Chase (2-0-2) …. final shots were 31-30 in favor of Worcester…Chris Nell (14-18-2) made 30 saves on 31 shots for Maine… Mitch Gillam (19-13-5) made 28 saves on 30 shots for Worcester….Blake Wajtala was the backup…. Worcester went 0-for-2 on the power play while Maine went 0-for-3…. Kyle McKenzie (inj), Tommy Panico (inj), Alex Vanier (inj), Evan Buitenhuis (inj), Ross Olsson, and Drew Callin did not dress for Worcester….Mike Cornell (BRI) and Nick Sorkin (BNG) are currently in the AHL….forward Drew Callin (Bentley) was signed to a contract on Thursday…..Holy Cross Alum Spencer Trapp was released from his ATO on Thursday while Charlie Michalowski was released from his contract … the Railers are now 16-10-5-1 on home ice this season…Ryan Hitchcock has 35 points (15-20-35) in his last 27 games…. the Railers have 8 games remaining (4 home, 4 road)… Worcester now has 48 fighting majors this season – they had 45 last season….Connor Doherty and Matty Gaudreau all picked up assists for Worcester….Ryan Hitchcock had a game high eight shots on goal… Worcester has not allowed a power play goal in eight straight games (15-15)….Yanick Turcotte now leads the entire ECHL with 17 fighting major penalties (9 home, 8 away)…Worcester is now 0-6 against Maine this season in games decided past regulation.

On Saturday, the Railers head to Manchester to take on the Monarchs at 6pm before heading to Reading to take on the Royals at 4pm on Sunday.  Coverage starts 25 minutes before puck drop on 98.9 Nash Icon.

On Saturday, March 30  – BIG GAME SATURDAY! – NE Football Specialty jersey to benefit the March of Dimes with a special appearance by the Super Bowl Trophy , NE Patriots Street Team, Pat the Patriot, and Patriots Alumni (TBA)!  Every Saturday night home game is SATURDAY NIGHT SIGNINGS presented by MidState Auto Group with a Railers player signing autographs during the first intermission. Puck drop is at 7pm vs. the Brampton Beast!