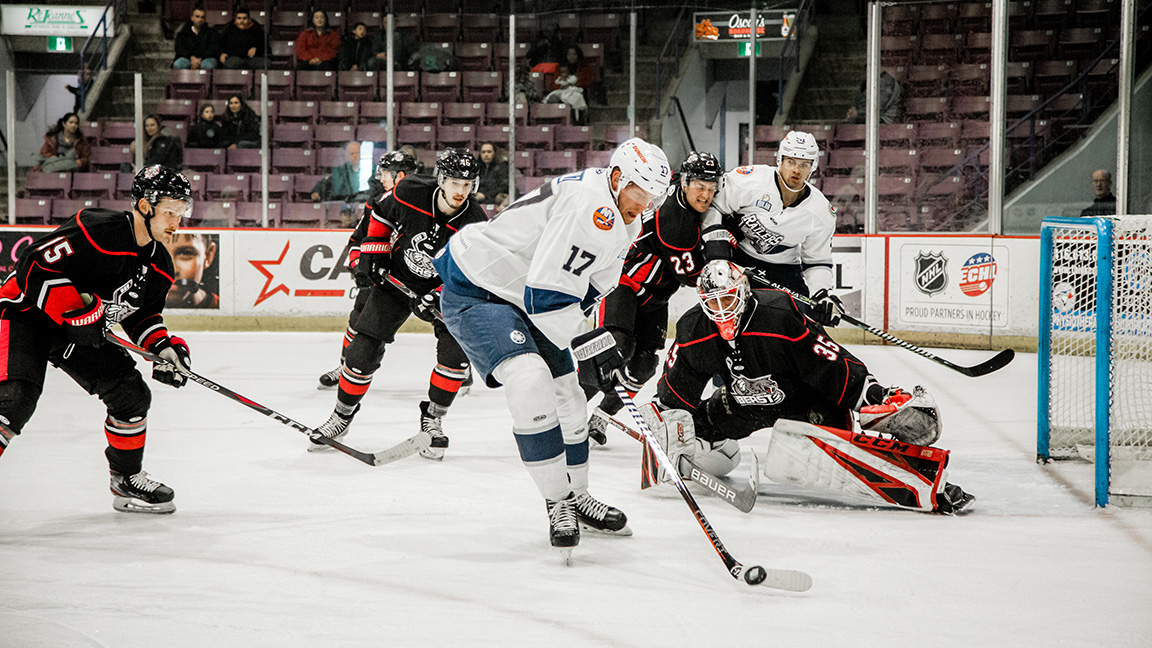 Brampton, ON– The Worcester Railers HC (4-9-0-0, 8pts) dropped their fourth straight game in a 8-3 loss to the Brampton Beast (9-6-0-0, 18pts)on Sunday afternoon in front of 2,087 fans at the CAA Centre. The Railers will be back in action next Sunday, Nov 24 for the first Kids Giveaway Sunday of the year taking on the Adirondack Thunder at 1:35pm.

Ross Olsson (1-1-2), Bo Brauer, and Jordan Samuels-Thomas all scored goals for Worcester, but the Beast scored four first period goals and never looked back. Jakub Skarek allowed four goals on 12 shots in the first period as Evan Buitenhuis came in relief for the final two periods making 24 saves on 28 shots. Francois Beauchemin (3-0-3) and David Pacan (1-3-4) led the way offensively as Joey Daccord made 22 saves on 25 shots in net for his fifth win on the year. The Beast are now 4-0-0 vs. Worcester this season as the Railers have dropped eight of their last nine games.

It was all Brampton as the Beast grabbed goals from David Pacan (6th) and Francois Beauchemin (7th) just 2:30 into the game to take a 2-0 lead. Driving the net hard, Ross Olsson (2nd) slammed home a rebound at 4:19 after a great entry and shot from JD Dudek. Daniel Leavens (6th) gave Brampton back a two-goal lead snapping a shot off from the point beating Jakub Skarek low blocker at 17:14. With just 14 seconds left in the frame David Vallorani (5th) fired a wrister from the left circle finding the back of the net making it a 4-1 Brampton lead. The Beast outshot the Railers 12-9 in the first period.

The Beast added a score on the power-play at 6:44 of the middle frame as Francois Beauchemin (8th) blasted a wrist shot off from the high slot over the glove of Evan Buitenhuis giving Brampton a 5-1 lead. David Vallorani (6th) would net his second goal of the day finishing off a two on one going through the wickets of Evan Buitenhuis. Under a minute remained in the period when Bo Brauer (2nd) crossed the Beast blue line from the left wing and whipped one on net past the blocker of Joey Daccord with just six seconds remaining in the second stanza. There was a near bench clearing brawl at the end of the period which consisted of Railers assistant coach Derek Army getting into it with Beast head coach Spiros Anastas which led to the ejection of Yanick Turcotte. Evan Buitenhuis made 12 saves on 14 shots as he came in relief at the start of the period for Jakub Skarek. Worcester trailed 6-2 after 40 minutes of play.

Each team registered a power-play score in the third period. It was Jordan Samuels-Thomas (5th) for Worcester who scored with a wrist shot from the right circle beating Joey Daccord through the five hole at 15:42. Francois Beauchemin (9th) netted a hat trick score with 63 seconds left while Rob Mann (1st) finished off an odd man rush at 19:57 as Worcester fell 8-3 on the road.

Notes: Three Stars: 3rd star…. David Vallorani (2-1-3) 2nd star: David Pacan (1-3-4) 1st star: Francois Beauchemin (3-0-3) …. final shots were 40-25 in favor of Brampton…. Joey Daccord (5-5-1) made 22 saves on 25 shots for Brampton.… Jakub Skarek (2-2-0) made 8 saves on 12 shots for Worcester while Evan Buitenhuis came in relief at the start of the second period and made 24 saves on 28 shots…. Worcester went 1-for-3 on the power play while Brampton went 1-for-5…. Yanick Turcotte registered a game high 21 penalty minutes and now leads the ECHL with 68 penalty minutes as he picked up his first fighting major of the season…. The Railers have dropped eight of their last nine games and have been outscored 20-47 in the process…. Tanner Pond (inj), Ryan Mackinnon (inj), Drew Callin, and Anthony Florentino did not dress for Worcester…. Mike Cornell, Nic Pierog, and Linus Soderstrom are currently on recall with the Bridgeport Sound Tigers…. Worcester is now 7-9-1-2 all-time vs. the Beast and 2-5-0-2 at the CAA Centre.

On Sunday, November 24, the Railers host the Adirondack Thunder at 1:35pm on the first KIDS GIVEAWAY SUNDAY of the season!  The first 1,000 kids 12-and-under will receive a Worcester Railers blue jersey courtesy of Energy Monster!  With every Sunday game this season, fans can score a FAMILY FUN PACK starting at just $60 which includes four tickets and four beverages (either soda or beer).