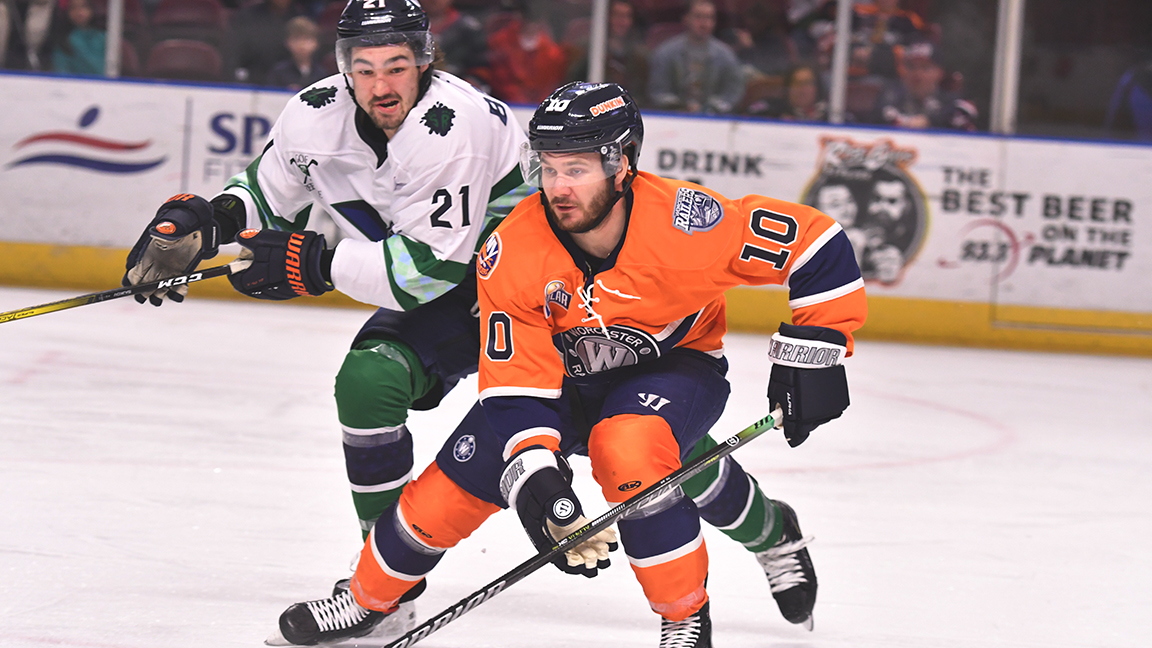 Meeting 1 of 2 vs. Greenville this season

Myles McGurty scores his first as a Railer

Through the first 20 minutes of play both teams had their chances and each team had a power-play but neither team would find the back of the net in the first frame. Worcester led in shots 16-9 through the first period of play.

The second period was filled with minor penalties, nine to be exact, and the only goal of the frame would come off the stick of Matt Marcinew (13th) when he ripped a shot off from the right circle over the left shoulder of Evan Buitenhuis at 5:03 to give Greenville a 1-0 lead. Worcester outshot Greenville 14-10 in the middle stanza but trailed 1-0 through 40 minutes of play.

The Railers would tie the game in the third period at 4:37 when Drew Callin (11th) finished off a rebound effort in the crease which was sent to the blue paint from behind the net courtesy of Ross Olsson. Nic Pierog (21st) sent a long range shot off the backboard from center ice that banked off the back wall then off the back of netminder Jeremy Helving into the back of the net to give Worcester a 2-1 lead. Ben Thomson (5th) would score a dandy of a goal with great patience tucking one past Helvig in the crease to increase the Worcester advantage to 3-1 at 15:50. Just 24 seconds later Greenville would answer to make it a 3-2 game this time from Michael Pelech (13th). Myles McGurty (2nd) would add an insurance goal for Worcester with just 1:34 to play in regulation and his first as a Railer would hand Worcester a 4-2 victory.

Murray has now played in 43 straight games…. The win for Worcester was there first since January 25th…. Myles McGurty scored his first goal as a Railer and finished the night +1 with three shots…. The four goal third period from Worcester was the most goals scored in a period this year…. Prior to the game the Railers were just 2-25-1 when trailing after two periods and just 1-13-0 on the road…. It was the second straight game the Railers had 40 plus shots and the seventh time this season…. Jack Macnee extended his point streak to two games with an assist… Nic Pierog finished with a game high seven shots…. Worcester has 19 games left on the regular season…. The Railers are 0-for-39 on the power-play in their last 11 games…. The Railers are now 3-1-0-0 all-time vs. the Swamp Rabbits and 2-1-0-0 at the Bon Secours Wellness Arena.

The Railers will face the Swamp Rabbits Saturday Feb 22 at 7:35pm and then bus to Charleston, SC to take on the South Carolina Stingrays Sunday Feb 23 at 3pm.

No Sunshine for Worcester in 5-1 Loss to Jacksonville