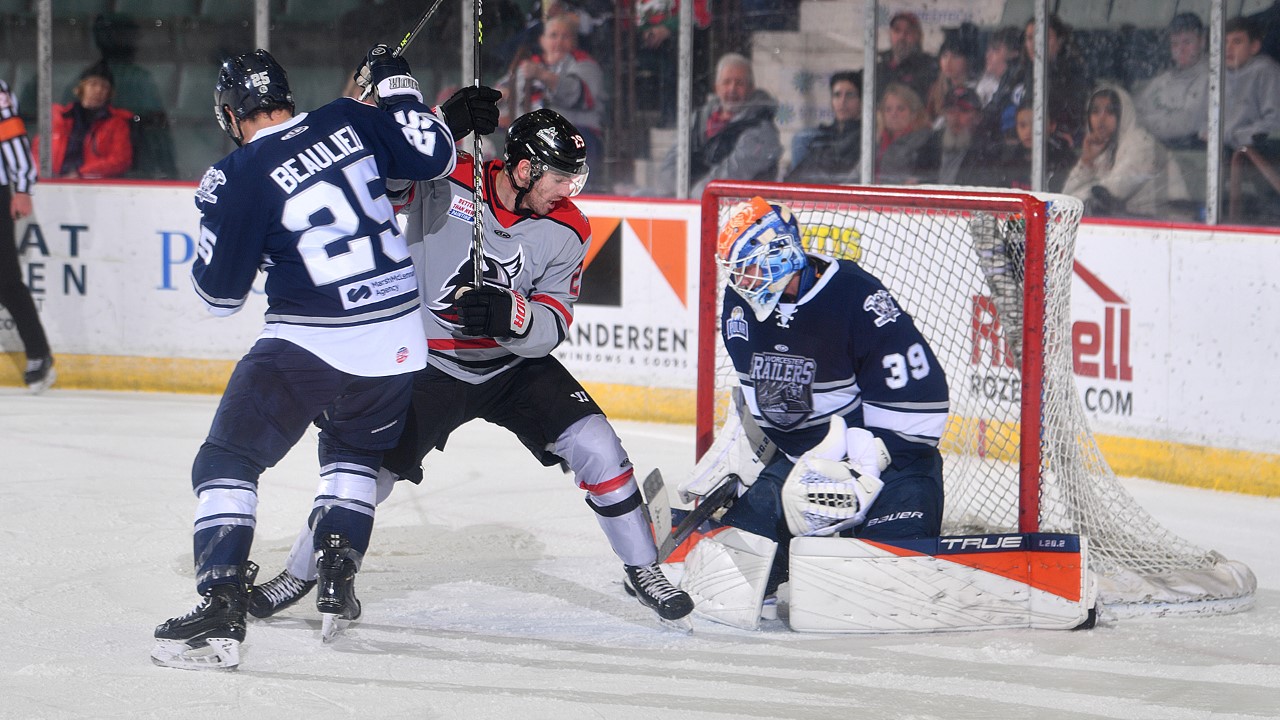 Meeting 7 of 17 vs. Adirondack this season

Glens Falls, NY – The Worcester Railers HC (18-9-1-0, 37pts) lost to the Adirondack Thunder (6-14-3-1, 16pts) on Friday evening by the final score of 7-0 in front of a crowd of 2,476 at Cool Insuring Arena in Glens Falls, NY. The Railers are off for Christmas break until December 28th, when they head up to Portland, ME to face off against the Maine Mariners at Cross Insurance Arena at 1:00 p.m.

A former Railer got things going in the first period as Grant Jozefek (1-0-1) tipped a shot in front on the power play to beat Henrik Tikkanen in net for Worcester and make it 1-0 Thunder as the teams headed into the first intermission. Isaac Poulter in net for Adirondack and Tikkanen in net for Worcester each stood tall in the second, with neither team conceding a goal. This was just the second time all season Worcester had been held scoreless through two. Adirondack then opened the floodgates in the third, with goals coming from Ryan Smith (1-1-2), Xavier Parent (3-1-4), and Sebastian Vidmar (2-0-2) to make it 7-0 Adirondack by the game’s end.

Grant Jozefek (5th), who once scored a goal for the Railers during the 2021-22 season, did so against the Railers for Adirondack to open the score at 1-0 Thunder 7:19 into the first. It came as an Adirondack power play expired, which freed two Railers from the penalty box simultaneously in Bobby Butler and Phil Beaulieu. The two had yet to rejoin the flow of play, which enabled the Thunder to score on what was effectively a five-on-three. Neither team scored the rest of the frame, sending the game into the intermission at 1-0 Adirondack. Worcester was outshot 16-9 through the first.

It was a scoreless second period for just the third time all season, as neither team found the back of the net through two periods. Henrik Tikkanen had been lights out for Worcester, stopping 29 of 30 shots faced for the Railers through two stanzas. Worcester continued to get outshot by Adirondack, 14-7 in the second, and 30-16 for the game.

Adirondack then poured on the offense in the third period, scoring the most goals they’ve scored in a single game this season at seven total on the night. Worcester conceded six goals in the third period, the most that they’ve allowed in a single frame all season long. Xavier Parent (5th, 6th, 7th) scored a hat trick for the Thunder all within the third period, but not everyone realized it at first. Only one hat was thrown onto the ice as Parent scored his third of the night. The rest of the hats ended up making their way out once Parent was announced as the first star of the game, postgame. Sebastian Vidmar (5th, 6th) added a pair of goals while Ryan Smith (1st) notched his first of the season, all contributing to the game’s 7-0 final. Worcester was outshot 15-5 in the third, and 45-21 on the game.