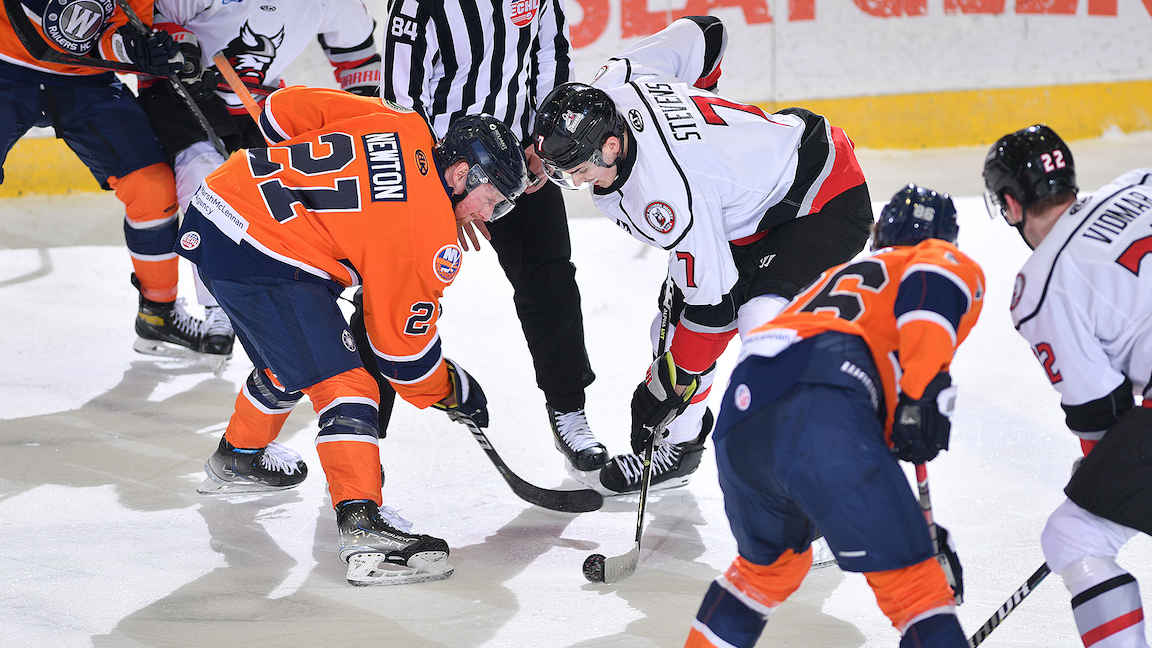 Meeting 12 of 12 vs. Adirondack this season

Railers Fall to Thunder 6-4 on the Road

Adirondack jumped out to a 2-0 lead in the first before Steve Jandric (1-0-1) was able to get the Railers on the board with his second goal in two nights for the Railers. As Worcester was down 2-1 to open up the second period, the Railers rushed down ice off of the opening draw and Liam Coughlin (1-0-1) was able to tie the game just 10 seconds into the frame. Back-to-back goals from Anthony Repaci (2-0-2) midway through the second and early in the third put Worcester ahead 4-2. Adirondack however responded with four unanswered goals in the third, giving them the 6-4 victory on Sunday afternoon.

The Thunder got on the board early in the first. Billy Jerry (2nd) intercepted a pass in front of the Railers net from Nolan Vesey and redirected it past Ellis to make it 1-0 4:23 into the game. 7:16 later, another Railers turnover led to another Adirondack goal. Worcester coughed up the puck back to the point, where Jordan Kaplan found Shane Harper (21st) at the left dot, who then one-timed a blast past Ellis to make it 2-0 Thunder with 8:21 left in the first. For the second straight night for Worcester, Max Newton found Steve Jandric (4th) out in front as he redirected the puck past Alex Sakellaropoulos in net for the Thunder to get Worcester on the board and make it 2-1 with 7:38 to go in the first. Worcester would get on the power play with 3:44 left in the period, but their struggles on the power play continued, as they were unable to convert. Worcester outshot Adirondack 13-9 in the first period.

Just 10 seconds into the second period of play, Liam Coughlin (9th) grabbed the rebound left over from a quick rush up ice between Ethan Price and Jacob Hayhurst. Coughlin unleashed a wrist shot that just snuck through Sakellaropoulos and tied the game 2-2 early in the second. Then, with 8:52 to go in the period, Connor McCarthy picked up the puck along the right point and threw it on net, where Anthony Repaci (21st) redirected it past Sakellaropoulos to give Worcester their first lead of the day at 3-2. Worcester would hold onto their lead heading into the third, as shots were dead even in the period at 11-11. The Railers outshot the Thunder through two periods 24-20.

Anthony Repaci (22nd) found the back of the net for the second time on the afternoon to give the Railers a 4-2 lead just 84 seconds into the period. Repaci was parked out in front as Brendan Less placed a perfect pass right onto the tape of Repaci, who then deked around Sakellaropoulos for the tally. Adirondack responded 5:34 later as Patrick Grasso (25th) barreled down the left side and unleashed a backhander that went upstairs over the right shoulder of Ellis to bring Adirondack within one. Adirondack would tie the game as Jordan Kaplan (11th) hammered a shot off the end glass which then deflected off of Connor McCarthy and into the net to make it 4-4 with 5:56 left in the game. Adirondack tacked on two more as Billy Jerry (3rd) scored on an odd-man rush, and Shane Harper (22nd) finished in front on a feed from Jordan Kaplan to make it 6-4 Adirondack. Worcester failed to score with Ellis pulled for the remanding two minutes, as they would fall in Glens Falls by a final score of 6-4. Shots in the third were even at 11 apiece, as Worcester outshot Adirondack 35-31 on the game.