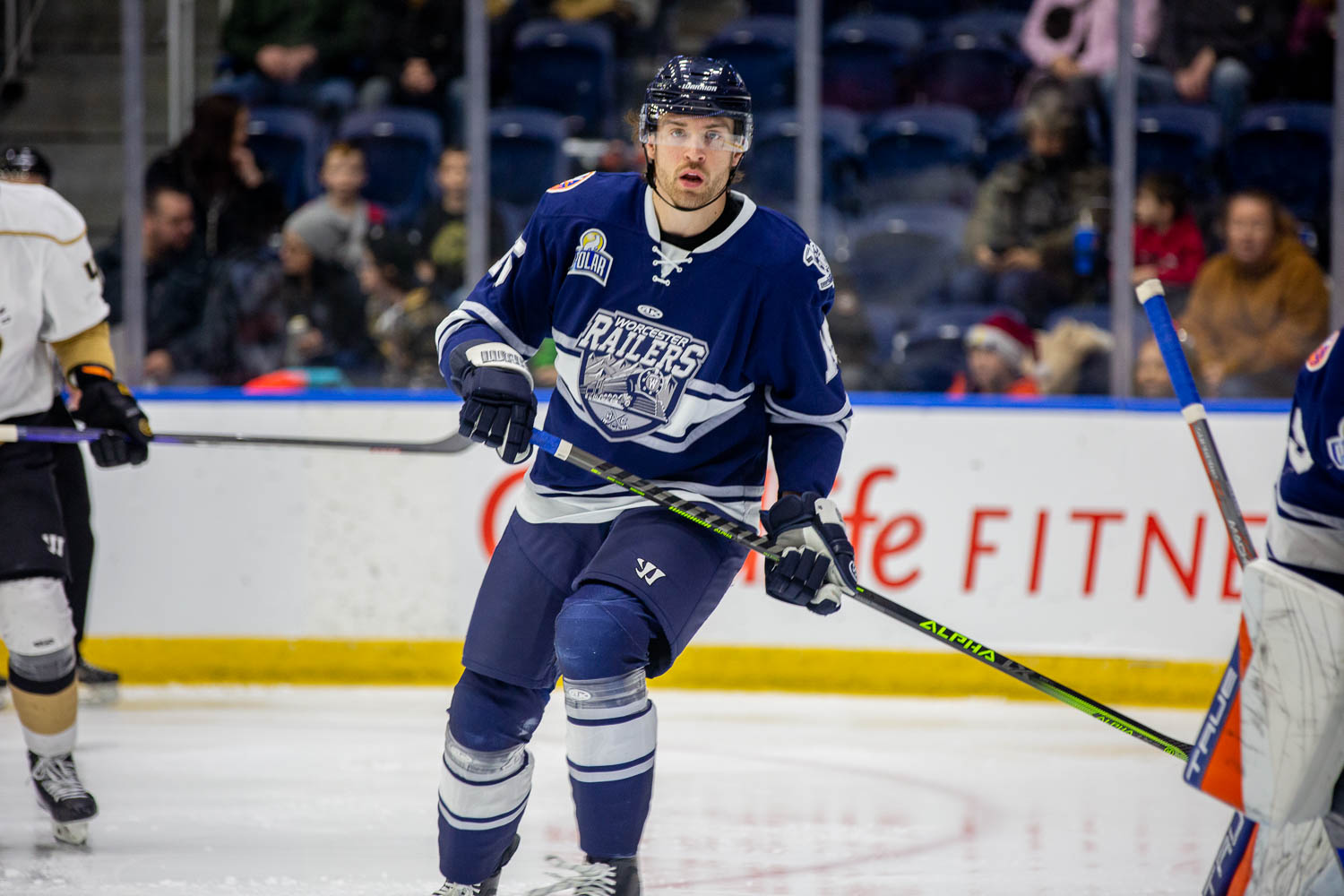 Meeting 4 of 12 vs. Newfoundland this season

Tikkanen made 44 saves in the loss

St. John’s, NL – The Worcester Railers HC (16-3-1-0, 33pts) fell to the Newfoundland Growlers (14-5-1-0, 29pts) on Sunday afternoon by the final score of 3-2 in front of a crowd of 3,554 at the Mary Brown’s Center in St. John’s Newfoundland. The Railers wrap up their season-long seven-game road trip in Trois-Rivières, QC at the Colisée Vidéotron on Wednesday, December 7th against the Trois-Rivières Lions at 7:00 p.m.

Keenan Suthers (1-0-1) opened the scoring more than halfway through the game to put Newfoundland up 1-0 with 6:26 left in the second. Just 30 seconds later, Worcester’s Jack Quinlivan (1-0-1) capped off an up-ice rush with Reece Newkirk and Liam Coughlin to tie the game at 1-1 going into the third period. Todd Skirving (1-0-1) beat Tikkanen to get Newfoundland back in front midway through the third, while Liam Coughlin (1-1-2) tied things up just over a minute later. Brett Budgell (1-1-2) capped things off with a snipe from the far circle top shelf to beat Tikkanen and the Railers 3-2.

It was a scoreless first period, as both Henrik Tikkanen for Worcester and Luke Cavallin for Newfoundland stood tall making big saves on both ends of the ice. Newfoundland led in shots 9-4 through the first 20 minutes of play from St. John’s.

The first goal of the game didn’t occur until the 13:34 mark of the second period, when Newfoundland’s Keenan Suthers (2nd) beat Tikkanen to get the Growlers on the board ahead of Worcester 1-0. The Railers then charged back up ice 30 seconds later with Reece Newkirk, Liam Coughlin and Jack Quinlivan (2nd) on the rush. Newkirk threw a shot from the left side that rang off the far post, right back to Quinlivan out in front who then slammed it home for the goal to tie the game 1-1 going into the third period. Worcester was outshot 19-7 in the second period, and 28-11 through two.

Midway through the third period, Newfoundland jumped back on the scoreboard. Todd Skirving (6th) would beat Tikkanen to make it 2-1 Growlers with 8:21 left in regulation. 1:21 later, Liam Coughlin (2nd) after having assisted on Quinlivan’s goal earlier in the game notched one himself to tie things back up. Jared Brandt flowed around a Growler defenseman and placed a perfect pass across the attacking end to the tape of Coughlin who then hammered a one-timer to beat Cavallin and tie the game 2-2. The Growlers came right back just 1:52 removed from Coughlin’s goal and regathered the lead. Brett Budgell (7th) curled from beneath the net and was left wide open along the left dot, as he then sniped a shot past the helmet of Tikkanen just inside the near post to give the game its final score of 3-2. Worcester put together a flurry of chances at the end of the game with Tikkanen pulled, but couldn’t break through Cavallin, as the Railers point streak came to an end at seven games. Worcester was outshot 19-8 in the third, and 47-19 in the game.