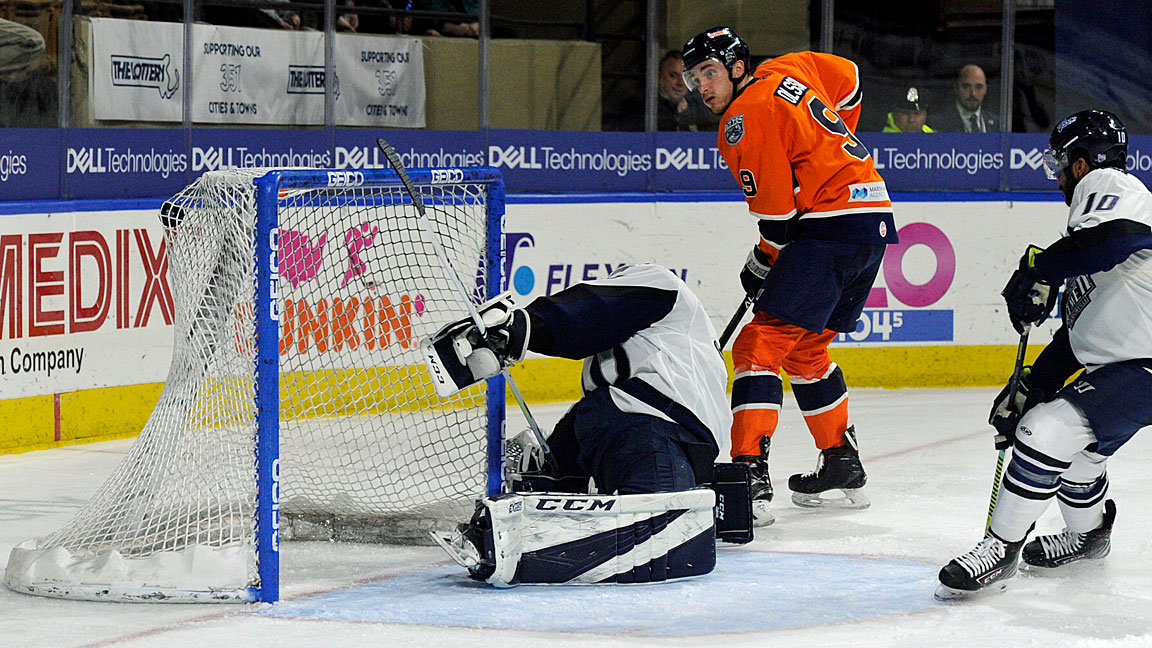 Jacksonville Icemen at Worcester Railers HC
January 5, 2020
DCU Center
Meeting 1 of 2 vs. Jacksonville this season
Railers are 1-0-0-0 vs. the Icemen this season

Worcester, MA – The Worcester Railers HC (13-19-2-0, 28pts) skated to their third straight victory and their fourth straight game with a point to kick off a four game homestand with a 6-3 win vs. the Jacksonville Icemen(10-18-4-0, 24pts) in front of 2,520 fans at the DCU Center on Sunday afternoon. The Railers kick off a home three in three weekend on Friday Jan. 10 vs. the Adirondack Thunder at 7pm.

Ross Olsson (2-0-2) registered his first-multi goal performance and added a fighting major while Nic Pierog scored his team leading fourteenth score and league leading fourth short-handed tally. Drew Callin, Shane Walsh, and Barry Almeida also scored for Worcester while Ian Milosz made a career high 40 saves in net for his second win of the season. Pierre-Luc Mercier scored two goals for Jacksonville while Griffen Outhouse made 21 saves in net for the loss.

Jacksonville would score first for the fifteenth time this season when Pierre-Luc Mercier (4th) was able to capitalize on a rebound effort on the far side post at 7:43. Jacksonville had three-power plays while Worcester had two but neither team would convert on the man advantage. The Icemen took a 1-0 lead into the locker-room after 20 minutes of play and Jacksonville led in shots 11-7.

Worcester headed into the second period short-handed and it took just 18 seconds for Nic Pierog (14th) to score his league leading fourth short-handed score of the season coming down on a breakaway firing one past the shoulder of Griffen Outhouse to tie the game at 1-1. After an initial shot from Ben Thomson from the top of the right circle, Outhouse left a juicy rebound at the top of the crease where Drew Callin (7th) back handed one into the back of the net to give the Railers a 2-1 lead at 16:05. Just 64 seconds later the former Jacksonville Icemen, Shane Walsh (11th), found a rebound after the initial point shot from Ivan Chukarov and Walsh blasted it home making it a 3-1 lead which the Railers took to the dressing room through 40 minutes of play.

Ross Olsson (5th) scored two goals in a 17 second span in the third period beginning at 12:40 when he found a loose rebound after a blast from the point by Ryan MacKinnon to give the Railers a 4-2 lead. Ross Olsson (6th) again at 12:57 cashed in on another rebound to give the Railers a three-goal lead. Pierre-Luc Mercier (5th) cut the deficit down to 5-3 at 13:20. Barry Almeida (9th) notched an empty net tally to secure the victory for Worcester 6-3.

Notes: Three Stars: 3rd star: Pierre-Luc Mercier (2-0-2, 7 shots) 2nd star: Ian Milosz (40 saves, Win) 1st star: Ross Olsson (2-0-2, FM) …. final shots were 43-27 in favor of Jacksonville…Griffen Outhouse (1-3-2) made 21 saves on 26 shots Jacksonville… Ian Milosz (2-2-0) made 40 saves on 43 shots for Worcester while Evan Buitenhuis served as the backup…. Worcester went 1-for-3 on the power play while Jacksonville went 0-for-4…. Yanick Turcotte (susp), Kyle McKenzie (inj,), Jordan Samuels-Thomas (inj), JD Dudek (IR), Tanner Pond (IR), did not dress for Worcester…. Mike Cornell was recalled by the Bridgeport Sound Tigers today and David Quenneville, Linus Soderstrom, Jakub Skarek are all currently on recall with the Bridgeport Sound Tigers…. Ross Olsson recorded his first multi-goal performance of his career and is now tied for the team lead with four fighting majors…. Ivan Chukarov extended his point streak to four games with an assist…. Nic Pierog registered his league leading fourth shorthanded-goal and has (6-5-11) in his last eight games…. The goal from Pierog 18 seconds into the second period was the fastest goal to be scored this season by Worcester to start a period…. Drew Callin now has five goals in his last five games…. Ben Thomson extended his point streak to three games with an assist…. Connor Doherty is the only Railers player to play in the first 34 games this season….. the Railers are now 9-9-1 under Coach Cunniff…. Worcester is now 1-1-0-0 vs. the Icemen all time and 1-1-0-0 at the DCU Center.

On Friday, Jan 10 the Railers host the Adirondack Thunder at 7pm on a 2-3-4 Friday! Score $2 popcorn, $3 soda, and $4 Bud Light in the Bud Light Lounge!  The Bubbleheads Band will perform before the game and during both intermissions in the Coors Light Zone.  It is also another Instagram Friday presented by the EDGE at Union Station where one lucky fan will win $100 in Railers merchandise!

On Saturday, Jan 11 the Railers host Newfoundland Growlers at 7pm on a BIG GAME SATURDAY on STAR WARS NIGHT!  The first 2,000 fans will receive a Railers themed STAR WARS movie poster.  Bring a canned food item to benefit local community organizations and win prizes courtesy of Price Chopper and Market 32. Members of the 501st Garrison STAR WARS troop will be in attendance. Saturday Night Signings will feature a Railers player(s) signing autographs during the first intermission in the Fallon Health Pavilion.

Still and Stir located behind the DCU Center provides hockey fans with a great pregame and postgame atmosphere all season long. Watch all road games broadcast live on ECHLTV.com for a small fee. Listen to all Railers games live on 98.9 Nash ICON with coverage beginning 30 minutes before puck drop with Eric Lindquist and Cam McGuire. Full season memberships, mini plans, and group tickets are on sale now by calling the Railers front office at 508-365-1750 or by visitingwww.RailersHC.com.