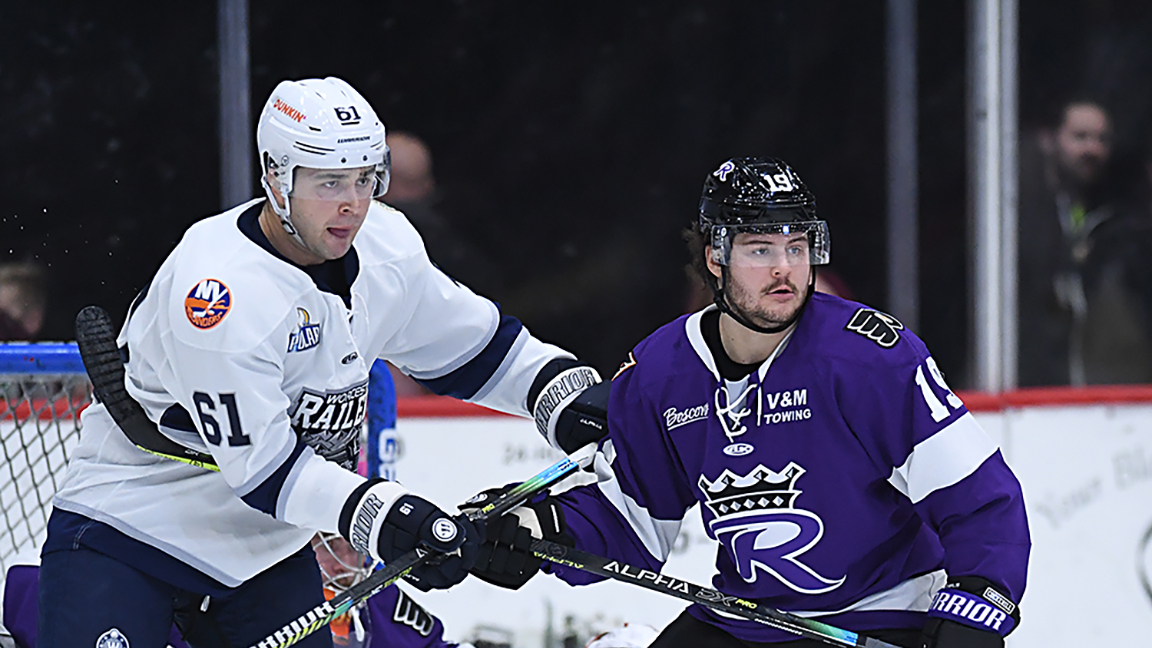 Worcester Railers HC at Reading Royals
January 4, 2020
Santander Arena
Meeting 4 of 13 vs. Reading this season
Railers are 3-1-0-0 vs. the Royals this season

Reading, PA – The Worcester Railers HC (12-19-2-0, 26pts) headed back to Worcester with an impressive 5-2 win over the Reading Royals(28-12-4-0, 40pts) in front of 4,120 fans at Santander Arena on Saturday evening. The Railers close out the three in three weekend at the DCU Center on Sunday vs. the Jacksonville Icemen at 3pm.

Nic Pierog (3-0-3) recorded the third Railers hat trick of the season while Mike Cornell (1-2-3), and Kyle Thomas (0-2-2) all recorded multi-point performances. Shane Walsh scored the other Railers goal while Justin Murray recorded his team leading fourth fighting major. Evan Buitenhuis made 19 saves in net for his eighth win of the season. Matt Srome (2nd) and Steven Swavley (5th) each scored goals for the Royals while Kirill Ustimenko made 24 saves in the loss. Former Railer Frank DiChiara recorded a game high 17 penalty minutes.

After a huge hit from Jack Stander in center ice the Railers went to work in the offensive zone and it would be Nic Pierog (11th) tipping a shot past Kirill Ustimenko off a point shot from Mike Cornell to give the Railers a 1-0 lead at 7:20 of the first period. On the power-play with just 2:25 left in the frame once again Nic Pierog (12th) redirected a point shot this time from Barry Almeida to increase the Worcester lead to 2-0. Worcester outshot Reading 12-3 through the first 20 minutes of play and led 2-0.

The Railers charged down the ice on a three on one rush and Jack Stander found Mike Cornell (1st) trailing in the high slot who painted the top right corner to make it a 3-0 lead at 6:29 of the second period. On the power-play Ryan Strome (2nd) finished off a pretty passing play at 11:09 decreasing their deficit to 3-1. Steven Swavley (5th) made it a one goal game as he fired one past the shoulder of Evan Buitenhuis with 5:08 to play in the frame and that’s when things got interesting. After matching roughing minors Justin Murray (4thFM) and Trevor Gooch (2ndFM) dropped the gloves and Murray laid the hammer down on Gooch as the two were both assessed five-minute fighting majors. With under three minutes to go in the stanza Frank Dichiara (1stfM) and Connor Doherty got into an altercation in which DiChiara received two minutes for instigating, five minutes for fighting, and a ten-minute game misconduct – aggressor. Doherty received just two minutes for roughing. The Railers held a 3-2 lead after 40 minutes of play.

Shane Walsh (10th) gave Worcester a 4-2 lead after slamming home a rebound off an initial shot from Ben Thomson at 12:53. Nic Pierog (13th) tacked on the empty net tally with just 44 seconds to cap off the hat trick and the Railers 5-2 win.

Notes: Three Stars: 3rd star: Matt Gaudreau (0-2-2) 2nd star: Mike Cornell (1-2-3) 1st star: Nic Pierog (3-0-3) …. final shots were 29-21 in favor of Worcester…Kirill Ustimenko (11-4-4) made 24 saves on 28 shots Reading… Evan Buitenhuis (8-10-1) made 19 saves on 21 shots for Worcester while Ian Milosz served as the backup…. Worcester went 1-for-2 on the power play while Reading went 1-for-4…. Yanick Turcotte (susp), Kyle McKenzie (inj,), Jordan Samuels-Thomas (inj), JD Dudek (IR), Tanner Pond (IR), and Bo Brauer did not dress for Worcester…. David Quenneville, Linus Soderstrom, and Jakub Skarek are all currently on recall with the Bridgeport Sound Tigers…. Connor Doherty is the only Railers player to play in the first 33 games this season….. Nic Pierog (3-0-3) recorded his tenth goal against Reading in 14 career games and his third multi-goal game of this season…. Mike Cornell (1-2-3) extended his point streak to two games with a career high three points…. Ben Thomson extended his point streak to two games and recorded a game high seven shots…. Shane Walsh has (9-5-14) in his last 12 games with a goal tonight…. Alec Marsh recorded his first ECHL point with an assist…. Jack Stander recorded an assist and was plus three….  the Railers are now 8-9-1 under Coach Cunniff…. Eric Cairns, Director of Player Development for the New York Islanders, joined Coach Cunniff behind the bench…. Worcester is now 14-9-1-0 vs. the Royals all time and 6-7-0-0 at the Santander Arena.

Followon TwitterSubscribeto RSS Feed
The Worcester Railers host a promotion-packed 3-in-3 weekend at the DCU Cen...