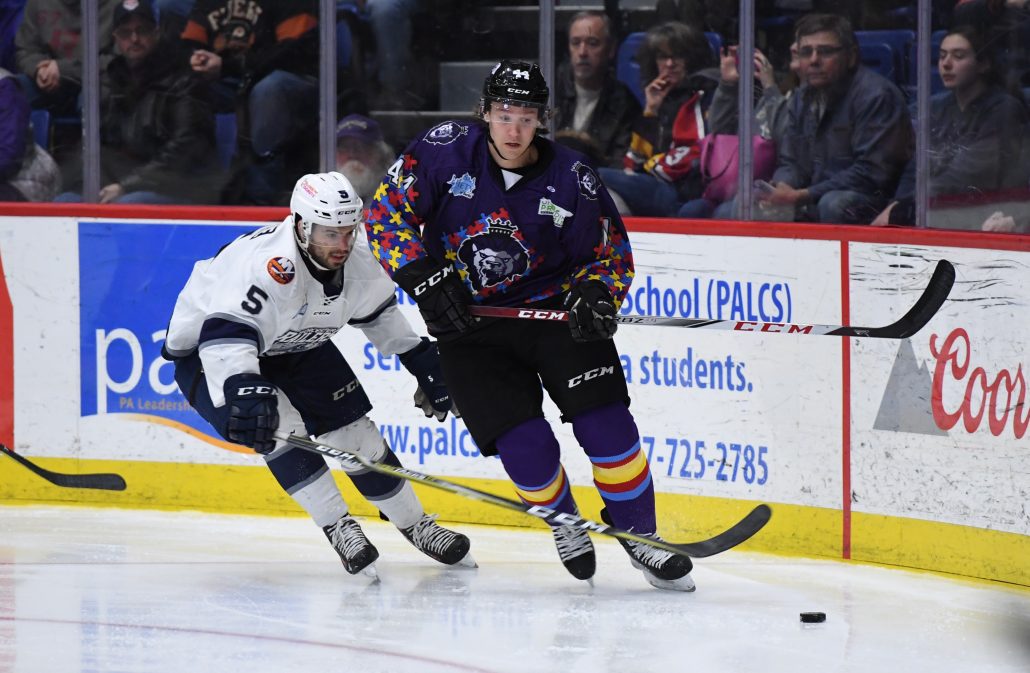 Meeting 13 of 14 vs. Reading this season

Mitch Gillam made 25 saves in net as Worcester is now five points behind the Nailers for the final playoff spot in the North Division – the Railers have two games in hand with seven games left.  Mark Dekanich made 28 saves in net for Reading as Mark Bennett had a goal and an assist to lead the way offensively for the Royals as Worcester’s six game (5-0-0-1) point streak came to an end.

Neither team found the back of the net in a fast paced first period of play as Wheeling held an 11-10 shot advantage through 20 minutes of play.  Worcester went 0-2 on the power play but had a few good looks on goaltender Mark Dekanich.

Reading grabbed two goals in the second period to take a 2-0 lead into the second intermission.  Brian Morgan (9th) scored on a breakaway with a snap shot past the blocker of Mitch Gillam at 5:07.  Mark Bennett (4th) scored into an empty net after a clearing attempt behind the Railers net skipped past the stick of Gillam who was unable to recover before Bennett fired the puck into the empty net from the right wall.  Worcester held a 20-18 shot advantage through 40 minutes of play but trailed 2-0.

The Royals added to their lead as Mike Huntebrinker (19th) ripped a one-timer from the left circle top shelf after a cross ice pass at 5:36 of the third period to give Reading the 3-0 lead.  A near brawl broke out at 18:50 after Matt Wilkins through a late hit and then got pummeled by Mike Cornell with all ten players coming together.  Mark Dekanich made eight more saves in the third period to hold onto his 3rd shutout of the season.

Notes: Three Stars: 3rd star: Brian Morgan (Goal) 2nd star: Mark Bennett (1-1-2) 1st star: Mark Dekanich (28 saves, Win) …Final shots were 28-28…Mark Dekanich (11-14-4) made 28 saves on 28 shots for Reading….Branden Komm was the backup for Wheeling…. Mitch Gillam (18-14-2) made 25 saves on 28 shots in his 16th start in the last 17 games for Worcester…Will King was the backup goaltender for the Railers…. Worcester went 0-for-3 on the power play while Reading went 0-for-3…Josh Monk (inj), Justin Agosta (susp), Chris Langkow (inj), and Tommy Kelley (inj) did not dress for Worcester…. Kellen Jones, Eamon McAdam, Ryan MacKinnon, Kyle Schempp, Yanick Turcotte, and Jeff Kubiak are currently on recall with the Bridgeport Sound Tigers and Tommy Panico was recalled by the Iowa Wild…. defenseman Josh McArdle played forward for Worcester….the Railers are now 2-5-0-0 at the Santander Arena…Worcester is now 16-7-3 in their last 26 games….Gillam is now 10-4-2 in his last 16 starts…Mike Cornell had a game high 15 penalty minutes and eight shots on goal…Barry Almeida added six shots for Worcester.

On Wednesday, March 28 the Railers host the Adirondack Thunder at 7:05pm with the first 500 fans 18 years-old and older receiving a $2 Massachusetts State Lottery Scratch Ticket.  Score $5 off any ticket at the Box Office by showing your Price Chopper Advantage Card.

On Friday, March 30 the Railers host the Brampton Beast on BEACH NIGHT presented by MidState Auto Group on a 2-3-4 Friday at 7:05pm.   The first 1,500 fans will receive a Railers HC beach towel presented by MidState Auto Group.  Pat Patriot, Patriots cheerleaders, and the Patriots street team will be on hand in the Harvard Pilgrim Healthcare Pavilion before the game! Enjoy reduced concessions at the DCU Center with $2 popcorn, $3 hot dogs, and $4 Bud Lights inside the Bud Light Lounge and fans are encouraged to wear their “Patriots gear” to the game.