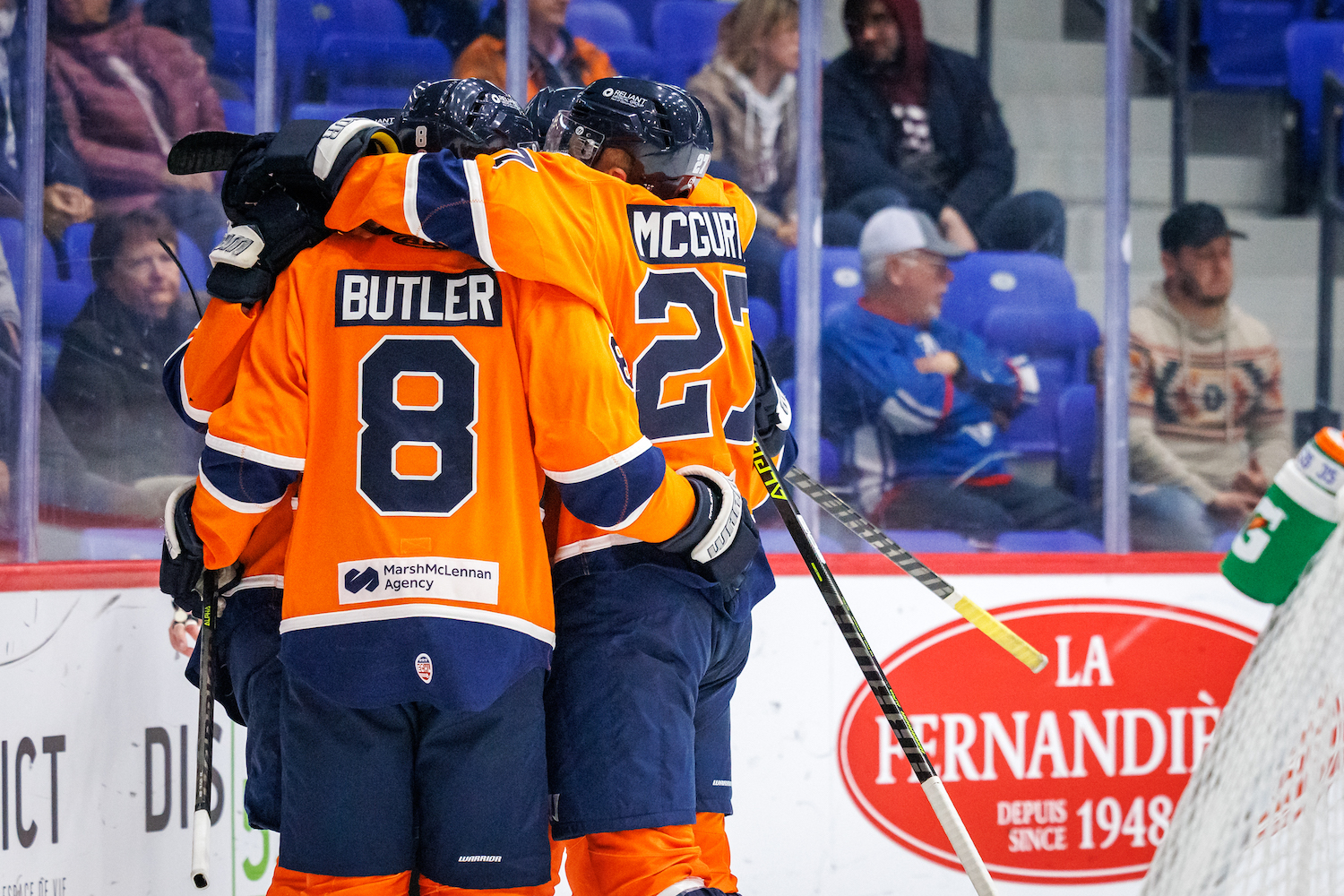 Meeting 1 of 5 vs. Trois-Rivières this season

Worcester trailed to start the game for the first time all season when Trois-Rivières’ Anthony Beauregard (1-1-2) slapped one top shelf past Ken Appleby on the power play to make it 1-0 Lions. Worcester answered with three straight goals from Reece Newkirk (1-1-2) and Steve Jandric (1-1-2) in the first, and Bobby Butler (2-1-3) in the second. At the 12:04 mark of the second, the Lions cut into the Worcester lead with Colin Bilek’s (1-0-1) third of the season and first of the game on the power play. The Railers responded with two unanswered goals from Nolan Vesey (1-0-1) later in the second, and Bobby Butler early in the third. Trois-Rivières tacked on one more with their third power-play goal of the night from William Leblanc (1-0-1), before Brent Beaudoin (1-0-1) notched his second empty net goal in two games, and third goal in three games to give the game its final score of 6-3.

The Railers struggled on the penalty kill on Wednesday night, with all three of their goals against coming while down a man. Trois-Rivières would start the scoring with their first power-play goal at the 8:48 mark on a well-timed one-timer from Anthony Beauregard (2nd). Beauregrad received a perfect pass from Olivier Galipeau to set him up for the blast and put Trois-Rivières up 1-0. Reece Newkirk (2nd) would clean up a messy puck out in front of the net after several missed opportunities for the Railers to tie the game at 1-1 at the 12:05 mark of the first. Just 15 seconds later, Steve Jandric (3rd) proved his legs and blazed down the right side of the ice to sneak one past Joe Vrbetic to put Worcester in front for the first time on the night, 2-1. This would be the third time in Worcester Railers history that two goals would be scored just 15 seconds apart. The goals were tied for the fastest two goals scored in franchise history. Shots in the first favored Trois-Rivières 14-9.

Worcester scored their third straight goal midway through the second as Bobby Butler (1st) found some room up the left side and sniped the bottom corner far side of the net to put Worcester ahead 3-1. Trois-Rivières went back on the powerplay with 9:37 to go in the second thanks to a Myles McGurty cross-checking penalty. 1:41 into the man advantage, Colin Bilek (3rd) finished off a clean offensive passing sequence for Trois-Rivières by putting one top shelf past Appleby to reduce the Worcester lead back down to one at 3-2. Nolan Vesey (1st) worked a give-and-go with Anthony Repaci down the left side with 3:55 to go in the period and made his way to the front of the net. Vesey’s initial shot was saved by Trois-Rivières’ Joe Vrbetic, but squeaked through just enough for Vesey to tap home the rebound on the other side, making it 4-2 Railers. Shots in the second again favored Trois-Rivières 9-6, while the Lions led in shooting through 40 minutes at 23-15.

Bobby Butler (2nd) developed a two-man rush down ice with Steve Jandric, who placed a perfect feed for Butler to be able to slip the puck between the legs of the new Lions goalie Phillippe Desrosiers. Trois-Rivières headed to the power play for the fourth time on the night after a Myles McGurty tripping call. William LeBlanc (2nd) finished a dirty goal out in front of Appleby with 10:08 to go in regulation to make it a 5-3 game. The Lions were 3/4 on the power play against Worcester after going 1/7 on the man advantage across their first three games against the Maine Mariners. Trois-Rivières’ James Phelan committed an interference penalty with 3:36 left in the game and put the Lions down a man for most of the time remaining in regulation. Trois-Rivières would pull Desrosiers with 3:31 left so that they could play even strength. The attempt to generate a late comeback fell short as Brent Beaudoin (3rd) potted his second empty-net goal in two games, and third goal in three games to give the Railers the victory by the final score of 6-3. Worcester was outshot 13-9 in the third, and 36-24 for the game.