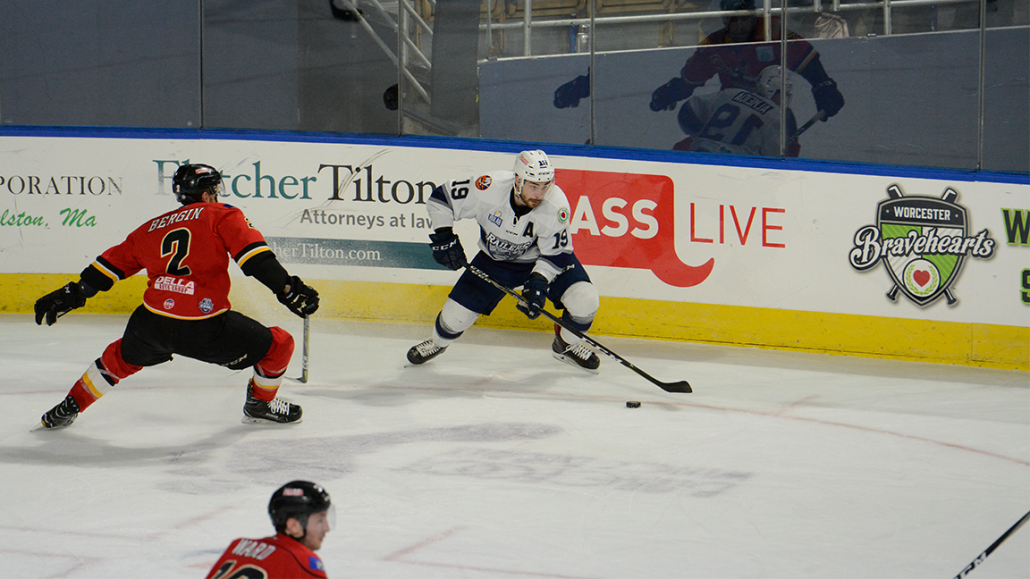 Game 2 of the Best of Seven North Division Semifinals

Game 3 is Sunday at DCU Center at 5pm

Worcester, MA – The Worcester Railers HC(1-1) returned home and evened up the best of seven North Division Semifinals with a 2-0 win over the visiting Adirondack Thunder(1-1) in front of 4,108 fans at the DCU Center on Saturday evening. Game 3 will take place on Sunday at 5pm at the DCU Center in Worcester before shifting back to Adirondack for Games 4 and 5.

Woody Hudson and Barry Almeida scored for the Railers while Mitch Gillam made 14 saves for his first professional playoff win and shutout in the first ever Kelly Cup playoff game played in the state of Massachusetts.  Worcester outshot the Thunder 27-14 and went a perfect 4-4 on the power play.

A high tempo first period saw no scoring but a ton of scoring chances as Worcester outshot Adirondack 10-4.  Matt Lane was stopped on a breakaway midway through the frame as MacKenzie Blackwood made the pad saves and Mitch Gillam stopped Thunder forward Terrence Wallin on a rebound try just a few minutes later.

Worcester would score their first ever playoff goal as Yanick Turcotte provided the forecheck and Woody Hudson (1st) was able to jam the puck at the side of the net off the skate of MacKenzie Blackwood at 7:40 of the second period to give the Railers a 1-0 lead. Physical play picked up 10-fold in the middle frame as several post whistle skirmishes broke out.  Shots were 21-10 in favor of Worcester through 40 minutes of play as the Railers held a 1-0 advantage.

Notes: Three Stars: 3rd star: Yanick Turcotte (Assist) 2nd star: Woody Hudson (GWG) 1st star: Mitch Gillam (14 saves, Win) …Final shots were 27-14 in favor of Worcester…Mackenzie Blackwood (1-1-0-0) made 25 saves on 26 shots for Adirondack… Nick Niedert was the backup for the Thunder…. Mitch Gillam (1-1-0-0) made 14 saves on 14 shots in net for Worcester in his first professional playoff win and shutout…Eamon McAdam was the backup goaltender for the Railers…. Worcester went 0-for-2 on the power play while Adirondack went 0-for-4…Chris Langkow (inj), Frankie DiChiara, and Kyle McKenzie (inj) did not dress for Worcester…. Kellen Jones, Patrick Cullity, and Josh Holmstrom are currently on recall with the Bridgeport Sound Tigers…. Jake Randolph and Connor Doherty each played their first professional playoff game for Worcester…… …it was the first home playoff win at the DCU Center since the Worcester Sharks defeated the Manchester Monarchs in Round 2 in Game 1 on April 25, 2010….Barry Almeida had four shots on goal which included the shorthanded empty net goal.

The Worcester Railers (4thseed) and the Adirondack Thunder (1stseed) are tied 1-1 in the first round of the Kelly Cup playoffs presented by Energy Monster.  The first round is a best of seven series and will follow a 1-2-2-1-1 format.  Complete schedule below: